When it comes to Harley-Davidson’s Touring lineup, flagship models like the Road Glide Special and Ultra Limited rule the roost. Equipped with colossal front fairings, the feature-rich tourers boast the Motor Company’s latest full-color TFT display, 5.25-inch speakers, and Boom! Box GTS infotainment system. Harley doesn’t throw the kitchen sink at all of its Touring platform bikes, though. For its Road King series, it opts for something more restrained.

Favoring an old-school attitude and style, the Road King is a rolling time capsule of America’s motorcycling heyday. Only a windshield separates the rider from the elements. Chrome coats the exhaust, handlebars, and even the blinker bracket. The Road King Special, however, is the black sheep of the bunch—in more ways than one.

The windshield goes by the wayside. A blacked-out aesthetic replaces the chrome finishes. A 19-inch front wheel and streamlined fender modernize the silhouette. Of course, the brand’s Milwaukee-Eight 114 truly makes the Road King special, taking the reins from the base model’s 107ci V-twin.

While the Road King Special is still a back-to-basics bagger, it’s anything but basic. Resplendent in Harley’s Snake Venom paint and decked out with the Bar and Shield’s latest tech, the premium trim brings Harley’s old-school tourer even further into the 21st century. 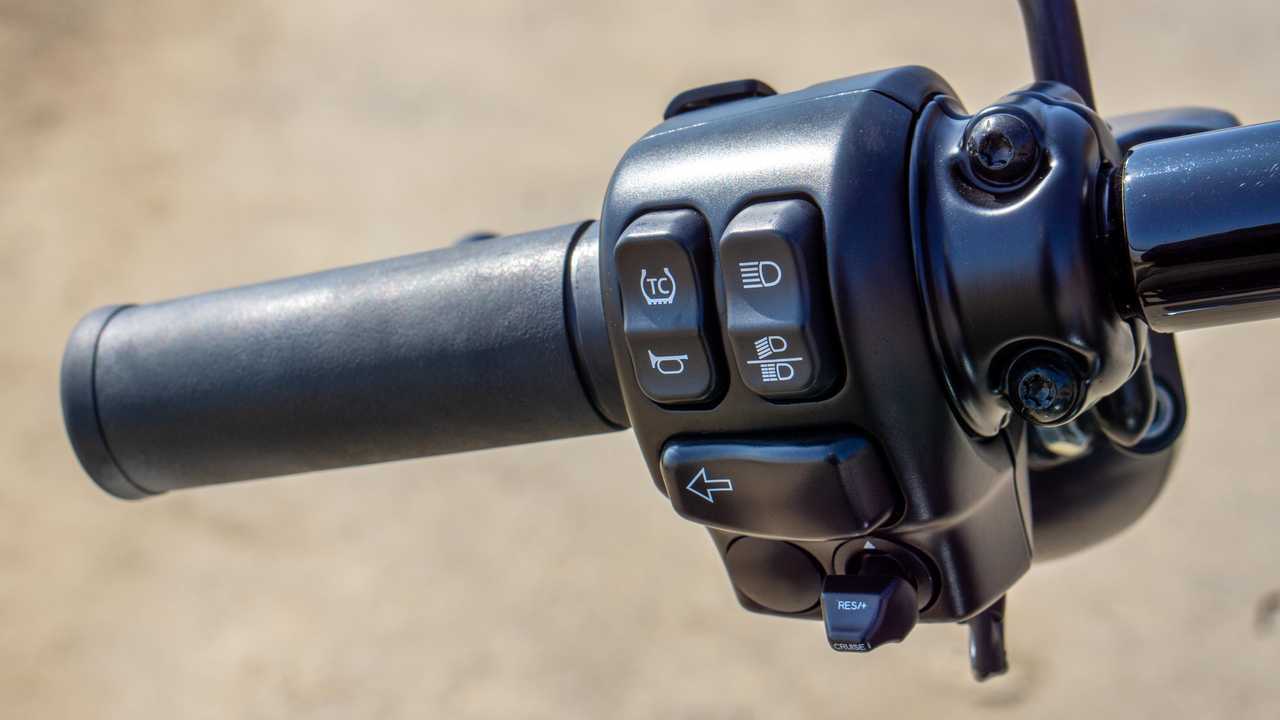 As with any Hog, the engine plays the starring role, but Harley’s Reflex Defensive Rider System (RDRS) turns in a surprise performance. Introduced on the 2020 Tri-Glide Ultra, Freewheeler, and CVO family, RDRS infuses Harley’s latest trikes and high-end tourers with long-overdue riding aids. Also available as an add-on for all touring rigs, the system incorporates lean-sensitive linked braking and ABS.

When it’s time to get back on the gas, the cornering-enhanced traction control adjusts to the available grip in all conditions with Standard and Rain modes. If the rider gets into the corner too hot, the Drag-Torque Slip Control System (DTSCS) mitigates rear-wheel slip under abrupt downshifts and deceleration. Despite the wealth of features and lengthy proprietary acronyms, RDRS operates in the background.

There aren’t multiple settings to choose between and Harley doesn’t complicate things with multi-layered menus. Yes, the features are always on but they never intrude unless the rider exceeds the system’s parameters. Aside from gauge icons illuminating once the systems activate, RDRS never detracts from the ride, but it can ultimately save it. 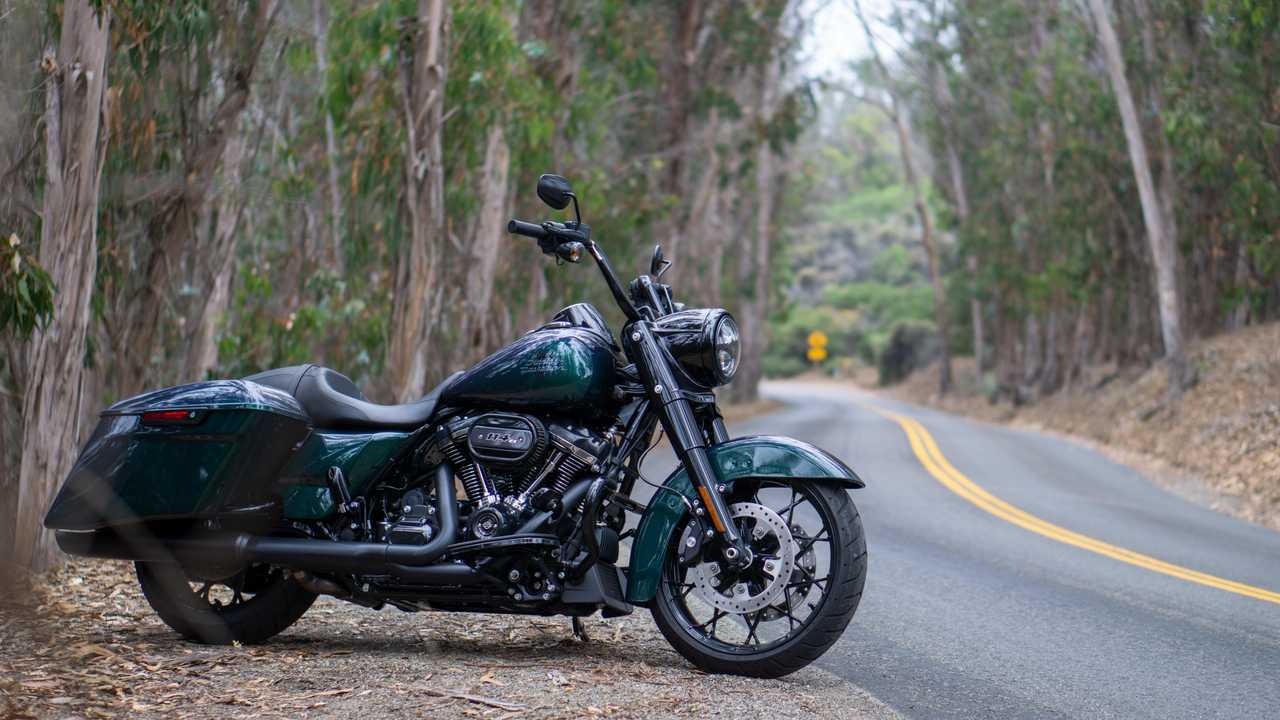 While I never initiated the traction control or ABS in my time with the Road King, DTSCS proved valuable when hustling through local canyons. The rear wheel still chirps under rapid deceleration, but the system quickly remedies the engine/rear-wheel speed differential before significant slippage occurs. It’s that invisible safety net that sets the RDRS apart, and most Harlistas would benefit from the simple yet effective technology.

The electronic suite isn’t entirely performance-oriented though. Harley’s Vehicle Hold Control is an invaluable tool for takeoffs on an incline. However, the most convenient feature is the Tire Pressure Monitoring System (TPMS). When either tire dips below the ideal PSI, a light on the dash immediately alerts the user. Unless you’re accustomed to carrying a tire pressure gauge, the system ensures that riders don’t have to actively track PSI before each ride. Users can simply check the tire status by cycling through the speedometer’s secondary display window.

RDRS may not offer multiple levels of engine braking or customizable ride modes, but the system seamlessly integrates into the Harley ecosystem. Catering to brand converts without isolating brand loyalists, the new tech stays true to the Harley feel by improving function while preserving form. The new-fangled tech may subtly refine the Road King Special, but the Milwaukee-Eight V-twin still takes center stage. 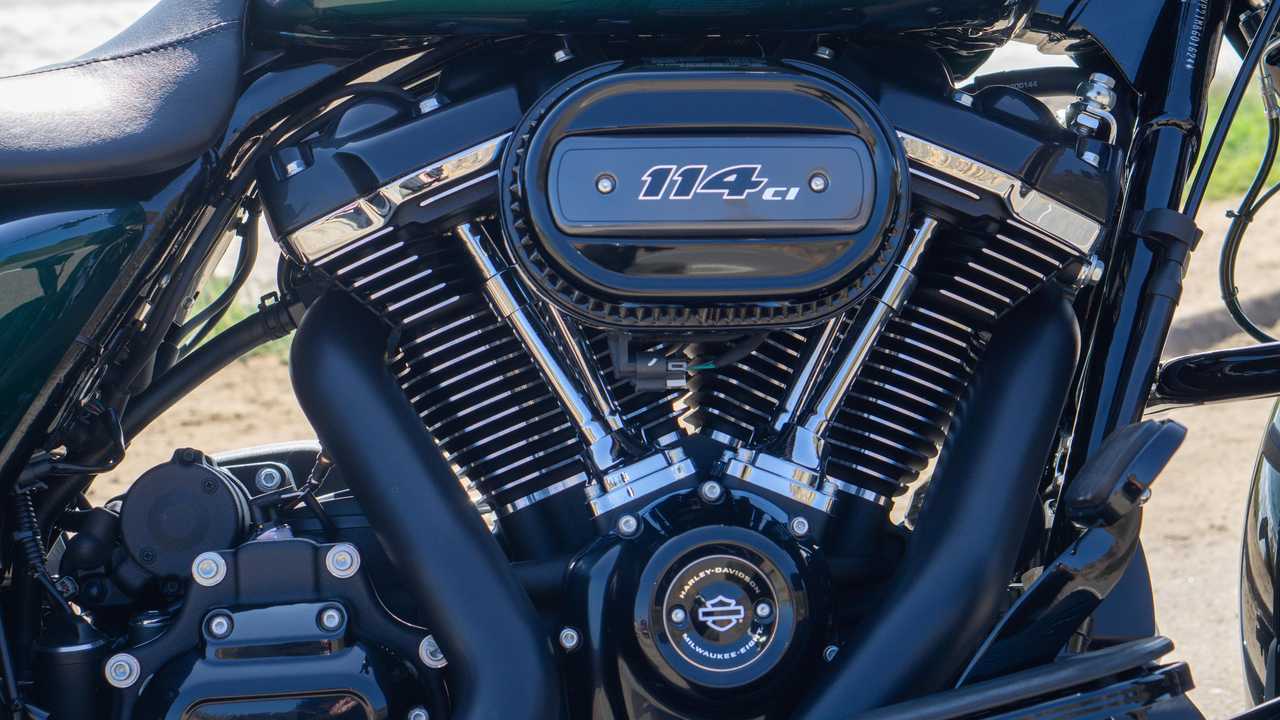 Touting 114 cubic inches (1,870cc) of displacement, Harley’s latest Big Twin is the brand’s largest production powerplant (non-CVO models). Since 2017, the platform has been refining the Bar and Shield’s Touring and Softail lineups, and it’s more tractable than the monster displacement lets on. By Harley standards, the 114 is supremely smooth. At a stop, it still shakes and rattles, but once it’s rolling, that all goes away.

Away from a stop, the Road King Special still jumps off the line with 119 lb-ft of torque. On the open road, the Milwaukee-Eight effortlessly glides down the highway. At only 2,600 rpm in 6th gear, the Road King is content to trot along at 70 mph all day long. Of course, the Milwaukee-Eight’s low-down pull is always on tap, ready to get the rider out of hairy situations. However, that torque is finite, spiking around 2,500 rpm before trailing off near 4,000 rpm. That leaves a narrow window of peak performance, but the next helping of torque is usually just a shift away.

To my surprise, the air/oil-cooled V-twin retains most of Harley’s patented grumble but loses much of the rumble. Despite its oil-cooled heads, the engine’s cooling fins still need air flowing between them to manage the mill’s temperature. After 10 minutes of lugging the Road King through mid-day traffic, the Milwaukee-Eight starts throwing heat onto the rider. Due to the exhaust, that warmth is most prominent on the rider’s right leg, but given enough time, the port side radiates as well. Fortunately, when the Special gets back up to speed, that heat quickly dissipates, returning the cockpit to a pleasant environment. 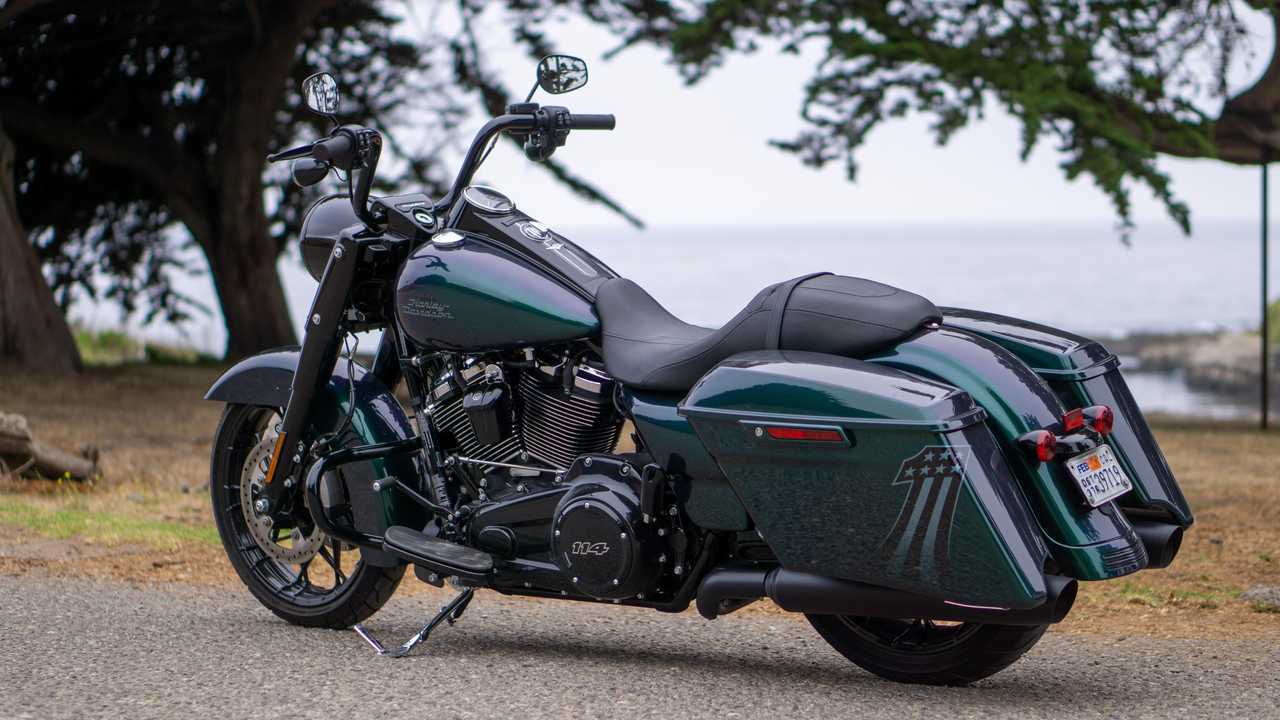 Like most Touring models, the Road King’s comfy confines promote long days in the saddle. Thanks to its contoured shape and ample padding, the Special’s seat rivals the coziest lounge chairs. Wide floorboards encourage the rider to stretch out for the long haul while the sleek hard bags provide generous storage for a day trip. The nine-inch ape hangers open the rider triangle, but that upright position isn’t as commanding at high speeds.

On a windless day, the Road King Special experience is unmatched. With your knees in the breeze, the unencumbered ride represents the purest form of motorcycling. However, in blustery conditions, the rider quickly becomes a parachute. Without a windshield to tuck behind, every air current and crosswind gust batters the rider’s chest.

The ape hangers only compound that effect. With the hands placed just below the shoulders, the rider absorbs the brunt of the oncoming wind. For that reason, I regularly set the cruise control at 70 mph while on the interstate. One hand on the bars, I would hunch over the tank, reducing the buffeting on my core. As previously mentioned, passing power is plentiful but speeds considerably over interstate limits aren’t as sustainable (or encouraged).

During a 400-mile road trip, a detour onto a backroad highway revealed the Road King’s true domain. From sweeping curves to sweeping vistas, flowing one-lane highways showcase the Hog’s strengths. Favoring gentle, constant-radius turns, the Special shines on the road less traveled. That doesn’t mean it isn’t nimble though.

The ape hangers might keep your sleeves flapping in the wind, but the leverage they create also keeps the Road King light on its feet. For a bike that weighs 807 pounds in running order, the bagger is eager to tip in. Side-to-side transitions are swift and smooth. At lean, the Harley remains planted and predictable. However, enthusiasm only goes so far.

In tight, technical sections, the Special’s dragging floorboards quickly remind the rider of its 32-inch lean-angle. The Brembo brakes have plenty of bite and overall stopping power, but the lever’s short travel tempers feedback and feel. After a strong initial pull, the lever only nudges toward the handlebars. Without a linear progression at the lever, I learned to rely on the fork dive to properly calculate my braking force, but that isn’t a poor reflection of the suspension.

The hulking 49mm Showa fork gobbles up road irregularities without sacrificing steering. When preload is accurately tuned to the rider’s weight, the dual rear shocks deliver an ultra-plush ride. Whether it’s in the twisties or on the turnpike, the Road Glide Special stays stable and agile, at least for a big touring bike. Except for the rear shock’s preload adjustment knob, the suspension is fixed, but those stock settings meet the bagger’s needs. No, it isn’t performance-oriented but it performs well at the main objective: touring. All while remaining playful in the esses.

This Volkswagen ID.3 burst into flames after a woman from the Dutch city of Groningen disconnected it from the curbside {...}

Governor Gretchen Whitmer of Michigan announced the Lake Michigan Electric Vehicle Circuit this week. The plan is to get enough {...}