There’s no need for any mystery about this: we drove the 2022 Audi R8 V10 Performance RWD above, below, and across the volcanic cliffs of Gran Canaria, and it is excellent. Anyone familiar with Audi’s side-bladed halo car should find this the least surprising news of 2021. The alphanumeric “R8” has stood for one thing since 2006, and it still does: stunningly accessible handling in a stunning package.

Reducing the workload on the front axle made the R8’s excellence playful. In our review of the R8 RWS in 2018, we wrote that the naturally aspirated 5.2-liter V10 sending all its power straight downstairs to the rear axle “is not the huge departure in character from the standard R8 that you might expect. But it is even better than an all-wheel-drive R8, and that’s really saying something.” Sometimes a day, or even four years, doesn’t make any difference in the least.

Yet, for all that the R8 is, it has deserved so much more. US sales, specifically. As we whiled away hours in an R8 droptop, the question was why the R8 doesn’t have it. The answer is that so much of what the R8 does to appeal to enthusiast human nature is diluted by the its rejection of other aspects of human nature. And those other aspects, in this segment, can be equal to or more important than capability.

First, the appeal. Taking the largest perspective, this car exists because of R8 RWD buyers beseeching Audi for more features. Audi product planners had turned the limited-edition R8 Rear Wheel Series (RWS) into the R8 Rear Wheel Drive (RWD) production car, pitching the latter as the least spendy way to gain entry to the Good Ship R8. In doing so, those planners curtailed the options list, preventing buyers from speccing the ultimate dynamic accessories. Shoppers with wallets that fat tend to bring feline temperaments to their shopping sprees – they don’t like being confronted by closed doors. 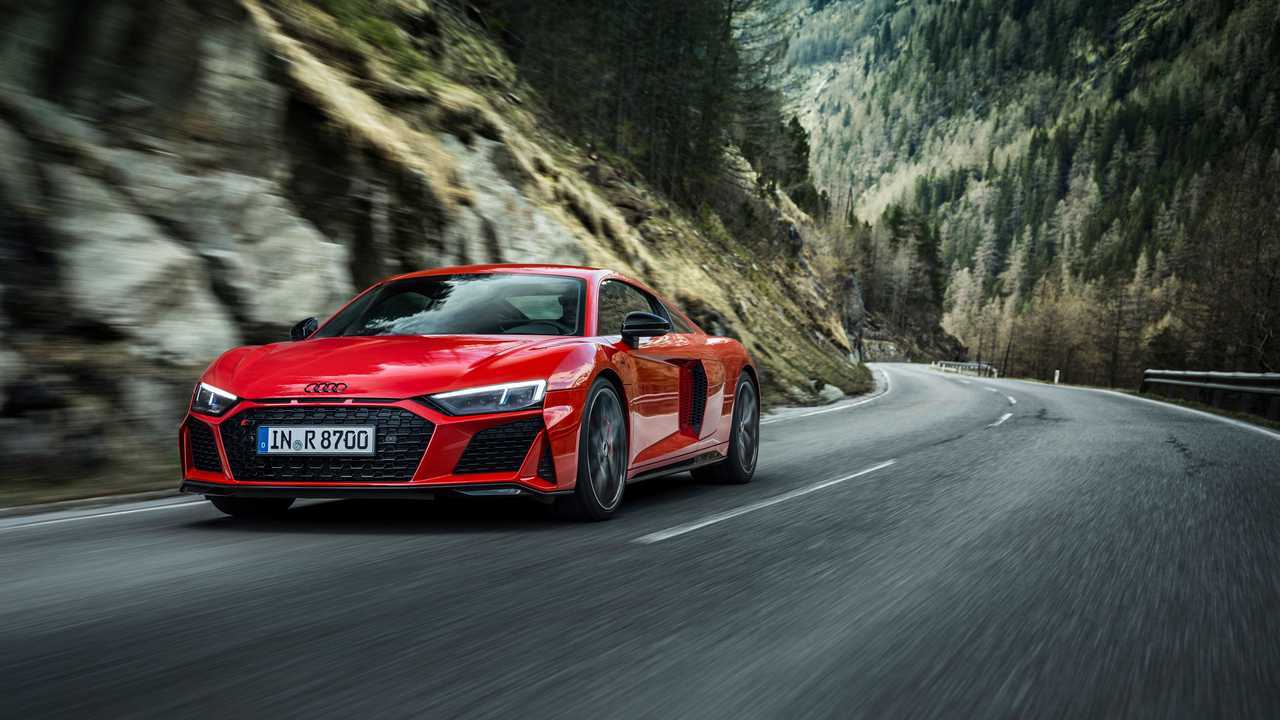 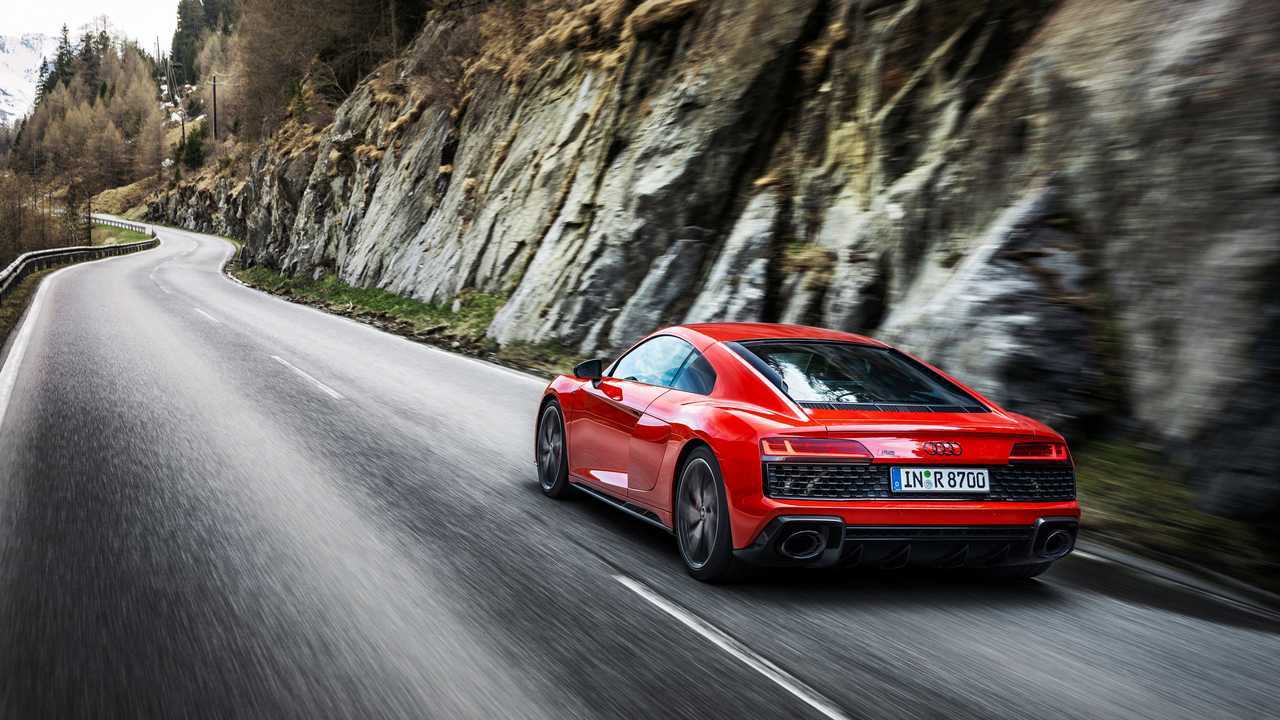 Buyers can now check a box next to the words “Dynamic Steering” and the number “$1,400,” the adaptive rack spanning a parking-lot friendly 10.5:1 steering ratio to the 204-mph-friendly 15.3:1. Another $1,100 bolts on a CFRP front roll bar that adds a hint of stiffness while removing 4.4 pounds up front. The bar won’t be offered on the convertible. Audi figures anyone kosher with the droptop’s 120 extra pounds over the coupe isn’t trying to shave trivial sums.

Don’t be fooled by the $3,600 Sport Exhaust Package’s fake-out name. One does not buy this for the black exhaust finishers. One buys this to unlock Performance Mode in Audi Drive Select and the two extra buttons on the Sport steering wheel. One of the supplemental buttons activates said mode, the other pumps up the volume on the exhaust. 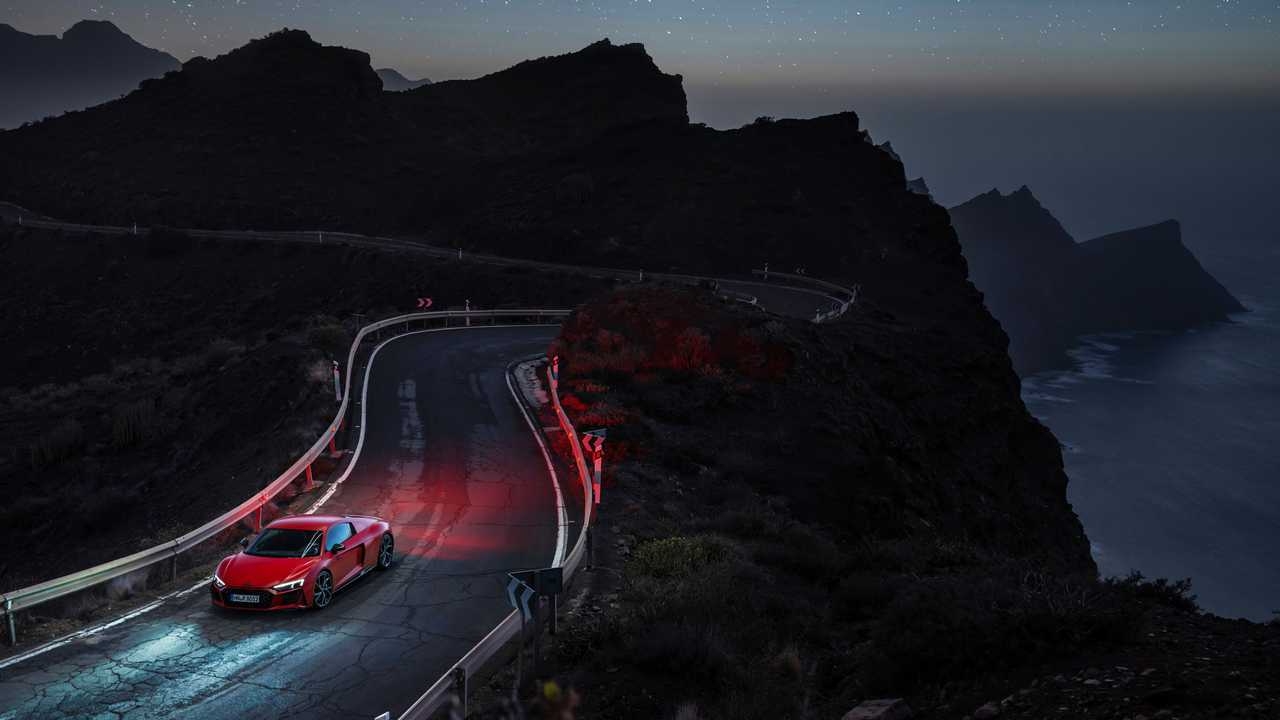 The finer, more intimate, more dazzling appeal is found when these attributes are put to work together. We marshaled the forces at Gran Canaria’s Maspalomas Circuit, a venue laid out by having someone drop a few strands of al dente angel hair pasta into a shoebox full of dirt and telling the work crew, “That’s the track. Build it. About that size, too.”

Thankfully, it needed just a few of the lumpy, paper-clip corners to be swept away by the R8’s goodness. Make that, swept away again.

Hard braking with the carbon stoppers, the kind that sheds three figures of speed before a hairpin, gets the coupe a tad squirmy. Nothing unsettling, just… lively. Every other facet of hard charging is ready, steady, go.

Acceleration comes on like an arrow from a longbow – straight, true, piercing. The R8’s exhaust note tracked with the tachometer in swinging from benign to beastly, but a decade of turbocharged performance cars has remodeled our reflexes. In the Audi, when a sweet, feral cacophony in the cabin convinced us we were about to cross that thin red line, we’d glance at the revs and find we had two thousand more in reserve, begging to be put to work. Joy.

The steering feel is uninvolved, but accurate. At Audi, progress and steering happen through technology, not emotion. It’s the throttle that delivers sensations: massaging the accelerator to manage placement of the 305-section rear tires is the kind of reward one can enjoy repeatedly at Maspalomas. Every lap was the dictionary definition of visceral – total, immediate, pre-conscious, pre-verbal response. For an enthusiast, it is the ageless, sacred connection to one word: Yes. 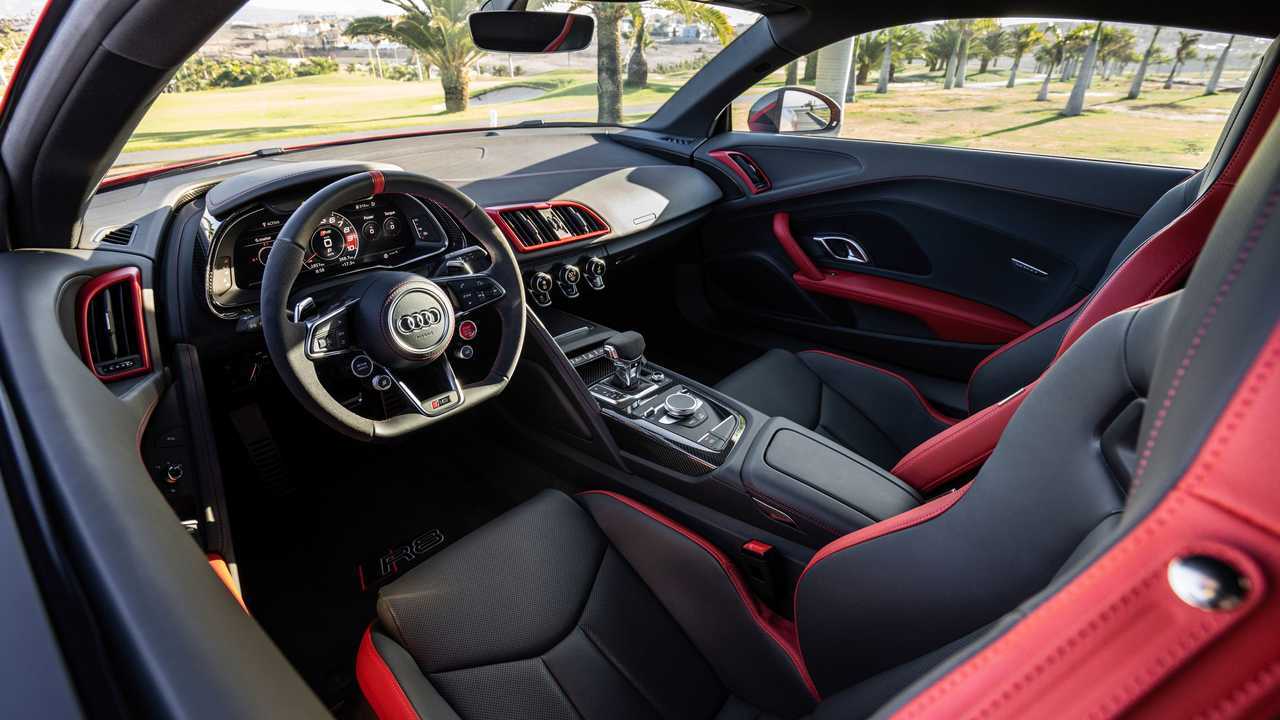 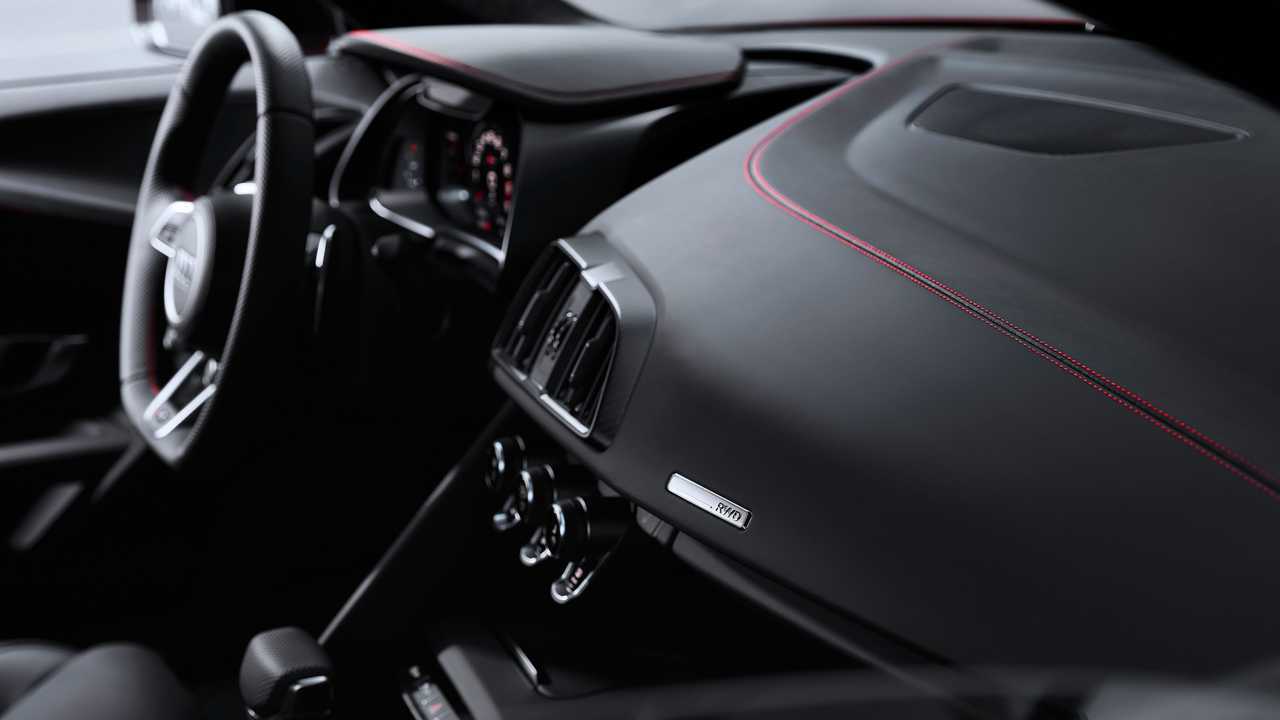 The R8 feels like it repays driving skill on an exponential scale, too, not a linear one. Being a little bit better gets a lot more out of it. This is why, in service to race teams around the world, the R8 LMS has won 250 series titles in GT2, GT3, and GT4 since 2009. Audi says those tallies beat the figures for any other car, including the Porsche 911.

With all that weight in the middle, though, when the R8 lets go, it lets go completely. Something to do with physics, we think. But you won’t end up in the gravel unless you make a mistake, or you want to. Even close to the edge, it’s tame that way.

And there’s the word that brings us to the other side of the R8, the one that smothers so much of its scintillation: tame. The R8, when not on the edge, is too much of it.

The R8 feels like it repays driving skill on an exponential scale, not a linear one.

We logged a long afternoon behind the wheel on punch-drunk roads. To devise Gran Canaria’s transportation network, some civil engineer piled mounds of jagged basalt rocks in the rough geography of the island, went back to that mythical pot of al dente angel hair pasta, dropped handfuls on his lumpy diorama, then told the work crews, “That’s the road system. Build it.”

So we tooled around at residential speeds, enjoying the Spanish day, looking very good doing it… And feeling like we were driving any other Audi. Not that there’s anything wrong with that, unless you’ve just spent six figures on a supercar. 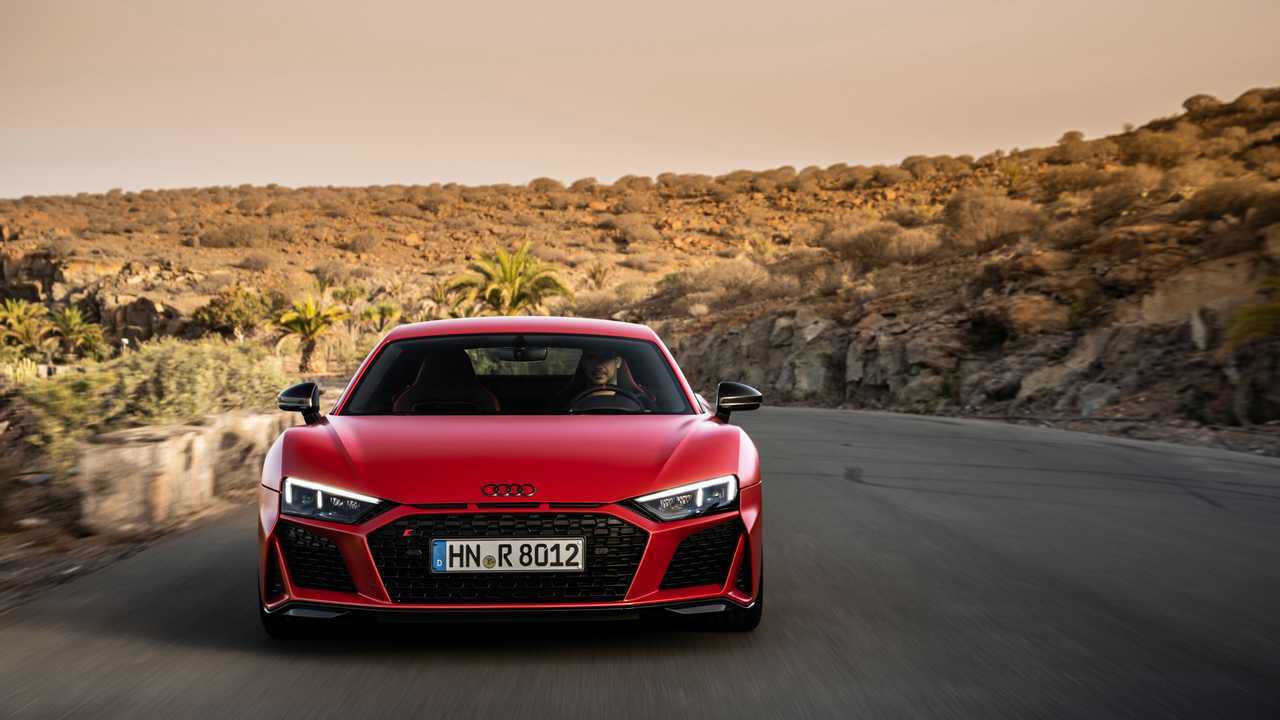 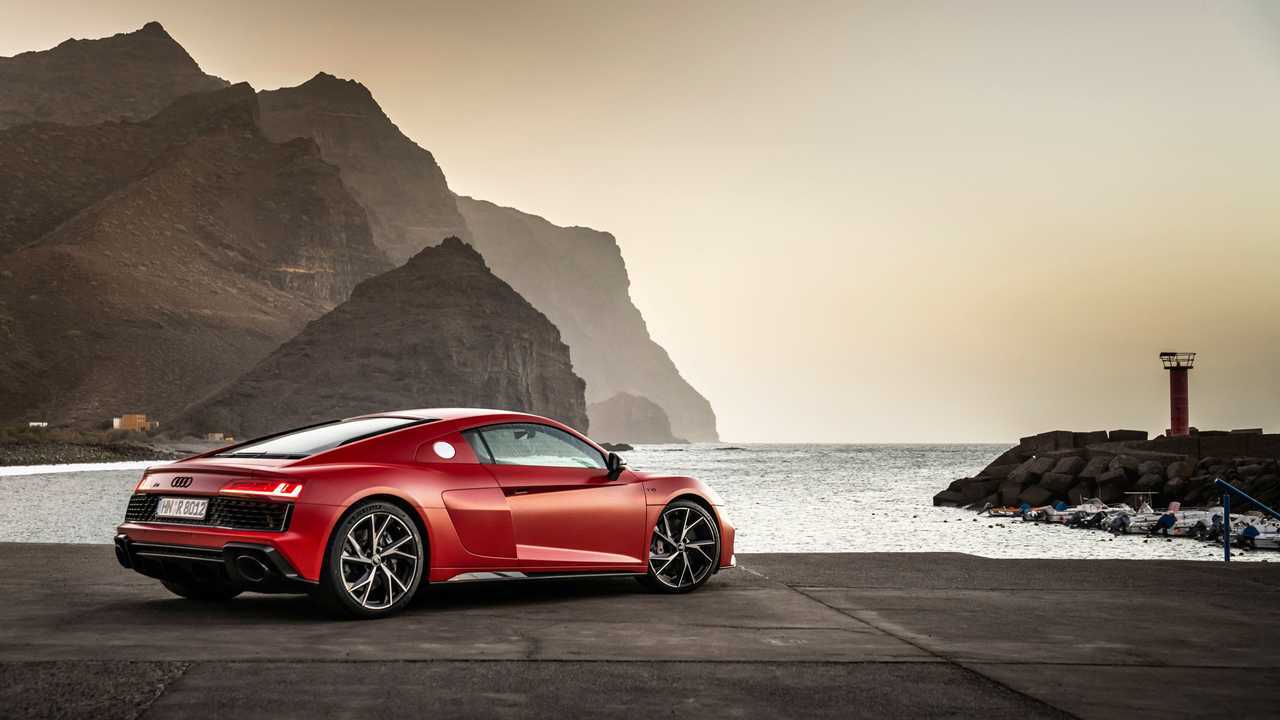 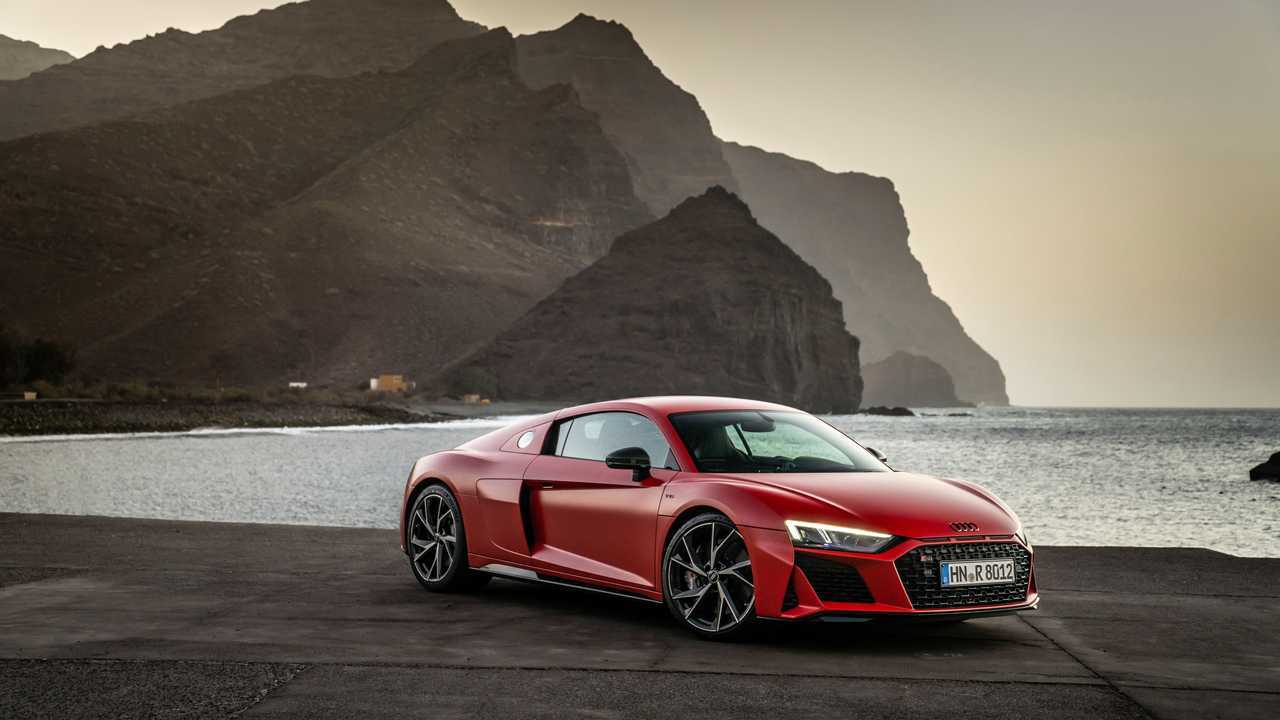 Halo cars exist to shine their light on an automaker’s entire range. In an ideal world, enough attributes of the halo are imbued onto the other products so that buyers can make reassuring or bumptious connections from the lesser to the greater. This doesn’t always happen. Sometimes an automaker’s lineup is full of ducks, all in a row, and one wolverine.

And we know, part of the magical R8’s unique selling proposition is that it’s “The Everyday Supercar.” But when buyers in the US go deep into six figures – this model starts at $150,195 (including a $1,495 destination charge) – for a two-door, two-seat, thigh-high supercar with a trunk sized to fit a large pillow and a couple of dreams, they want beer and circus, everywhere and at every spot on the rev range. And you can hold the beer.

Porsche is the only exception to this rule, with a certain deft subtlety that its customers appreciate – otherwise they’d have bought a pre-owned exotic. Away from Stuttgart, a certain slice of owner wants a car that will always be suggesting to everyone within earshot, “Look at me,” to everyone who can see it, “As soon as my owner isn’t looking, I will murder you,” and to everyone along for the ride, “I hope your will is in order.” 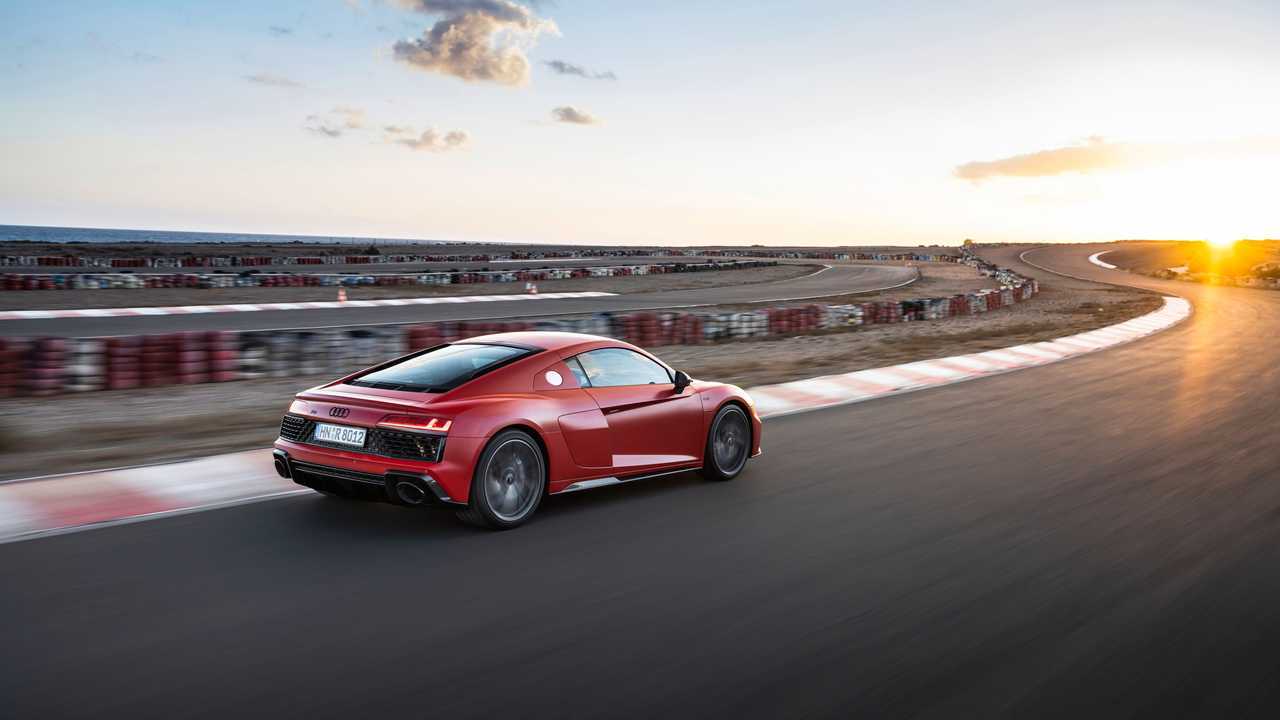 The R8 does two of the three, and has gone underappreciated because of it. We challenge anyone to name another car that’s been this good and this unchanged for this long. The Porsche 911 has been through three generations over the R8’s lifespan. Ferrari’s V8 lineup has been through four. The Lamborghini Huracan is the easy answer, but no one would confuse a Huracan for a Gallardo, either stylistically or dynamically.

The R8 V10 Performance RWD, as so many R8s before it, is supreme and ferocious when compelled. Fitting, then, that we were getting our first taste of it on Gran Canaria. If you believe Roman historian Pliny, conveying the thoughts of King Juba II, the Canary Islands were named for being full dogs of large sizes. The R8 is one of the biggest dogs on track. If only it were that easy to get the thing to bark off of it.

According to the bulletin, one cause might be an aftermarket radar detector hardwired into the inside rear-view mirror. The detector {...}

Electric startup Bollinger Motors announced today that it will be putting its consumer EVs on the back burner.The B1 SUV {...}

Toyota’s ancient full-size SUV will soon get its first new generation in more than 10 years just like the Tundra, {...}