Ignoring the controversy surrounding its storied name, the Ford Mustang Mach-E is a lovely electric vehicle, offering composed handling, quick acceleration, space for five passengers, and retro styling cues. However, a four-cylinder Mustang Fastback could outrun most versions of the 2021 EV, asking the question, “Is it a real muscle car?” One year later, the answer is unequivocally yes, with the arrival of the 2022 Ford Mustang Mach-E GT.

Most of the hardware will feel familiar to current Mach-E owners. Ford’s extended-range 98.8-kilowatt-hour battery is standard on the GT, as is dual-motor all-wheel drive. However, a more powerful front motor helps produce a total of 480 horsepower, with torque rising to 600 pound-feet on the standard GT and 634 lb-ft if you order the Performance Edition. Range hasn’t suffered as much as one might think, either. The EPA says to expect 270 miles between charges with the GT and 260 miles in torquier spec. 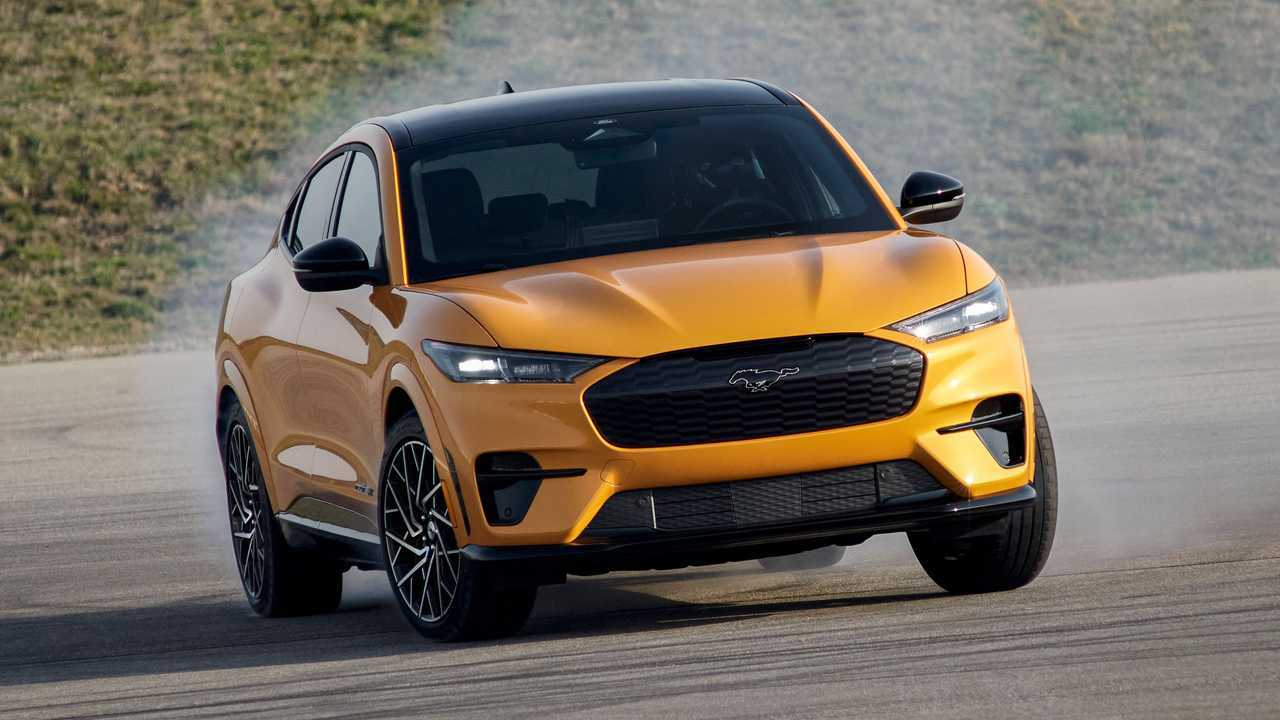 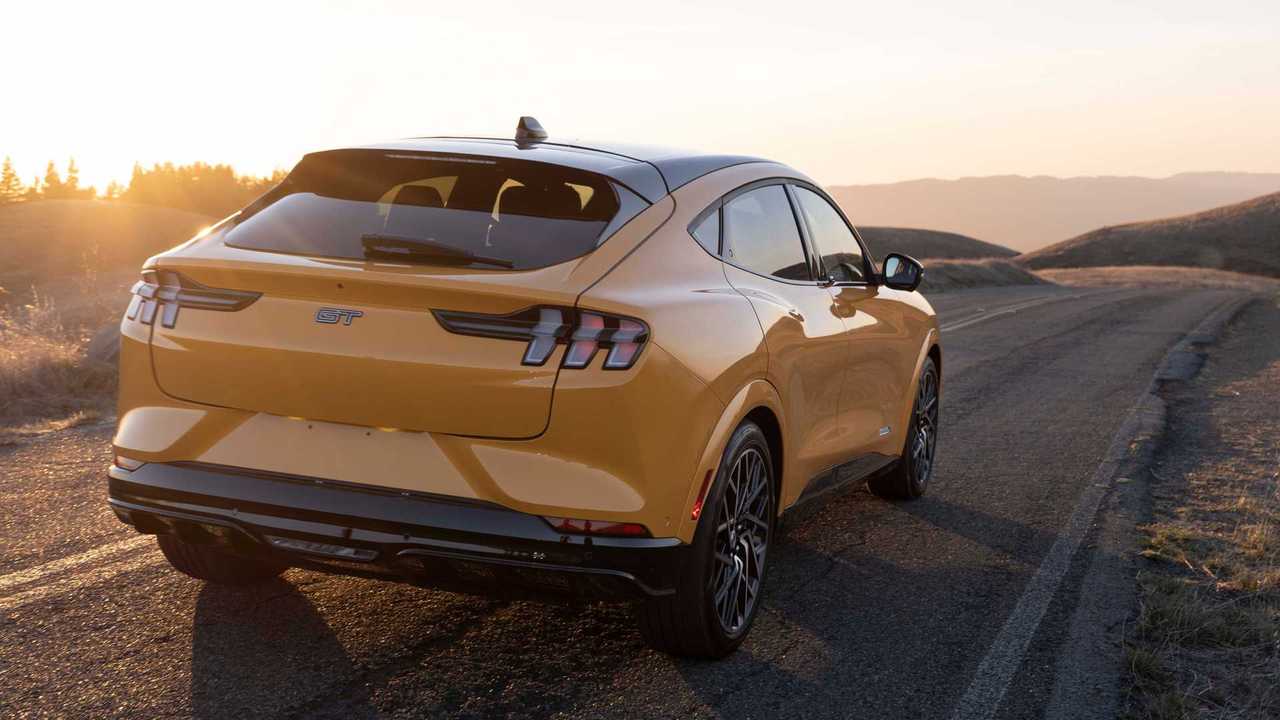 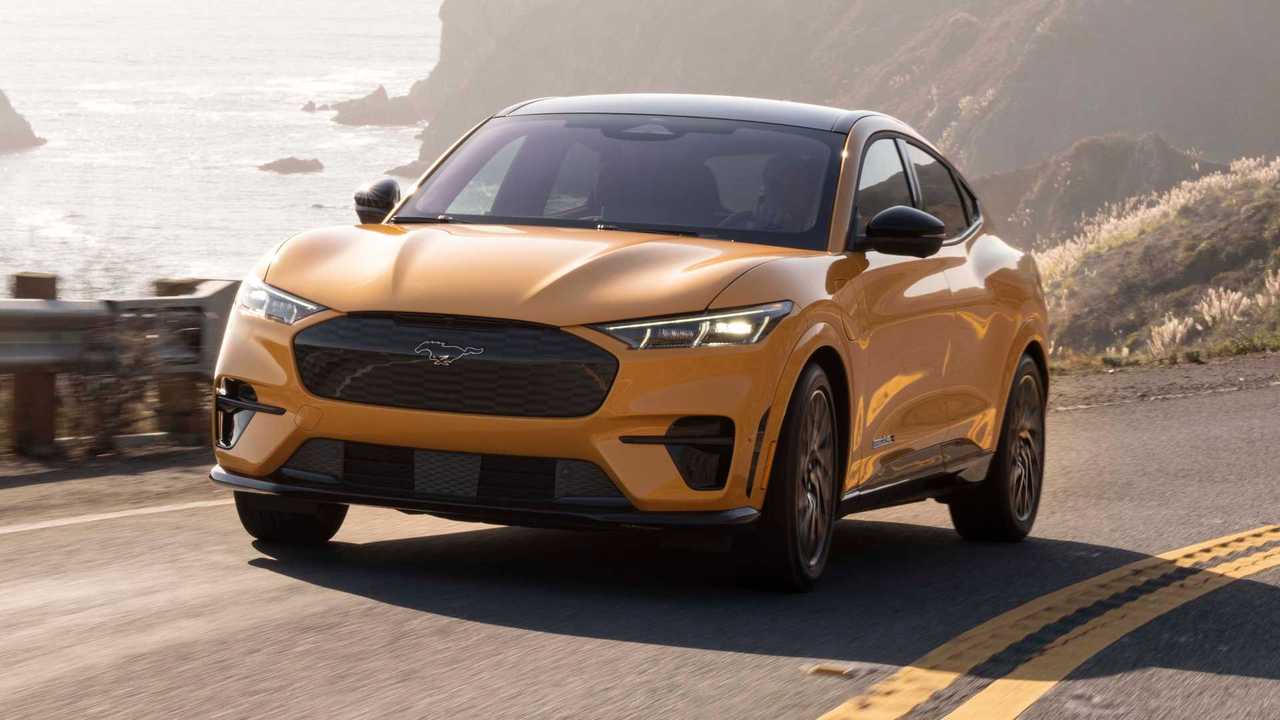 The result of all that grunt is an EV that hits 60 miles per hour in 3.8 seconds, dropping to 3.5 on the Performance Edition. So it’s definitely faster than the regular Mustang EV, a hair quicker than the gas-powered Mach 1 fastback, and nearly as fast as the Shelby GT500. And the instantaneous, delicious shove of torque off the line is wholly appropriate to the Mach-E GT’s naming convention. So has Ford finally imbued its electric crossover with some bona fide muscle car cred?

The 2022 Mustang Mach-E GT pairs its more powerful motors with slightly revised handling hardware. The GT gets slightly wider tires all around, going from 225 in the standard Mach-E to 245 millimeters here. Continental all-season performance rubber surrounds the base GT’s 20-inch aero wheels, while the Performance Edition’s mesh-pattern rollers wear summer tires from Pirelli. Thanks to that added grip, Ford engineers tuned the front axle motor for the extra 34 lb-ft of torque, helping the high-po model launch out of corners more quickly.

The vented front brake rotors are about an inch larger than those of the regular Mach-E, while the solid rear discs are nearly 2 inches larger. The four-piston front and single-piston rear calipers get red paint for a bit more flash. The most significant suspension upgrade is standard MagneRide dampers on the Performance Edition, and they’re as transformative here as they are on other Mustang models. A press of a button is all that’s needed to convert the Mach-E GT from a compliant boulevardier to an autocross-ready rat. 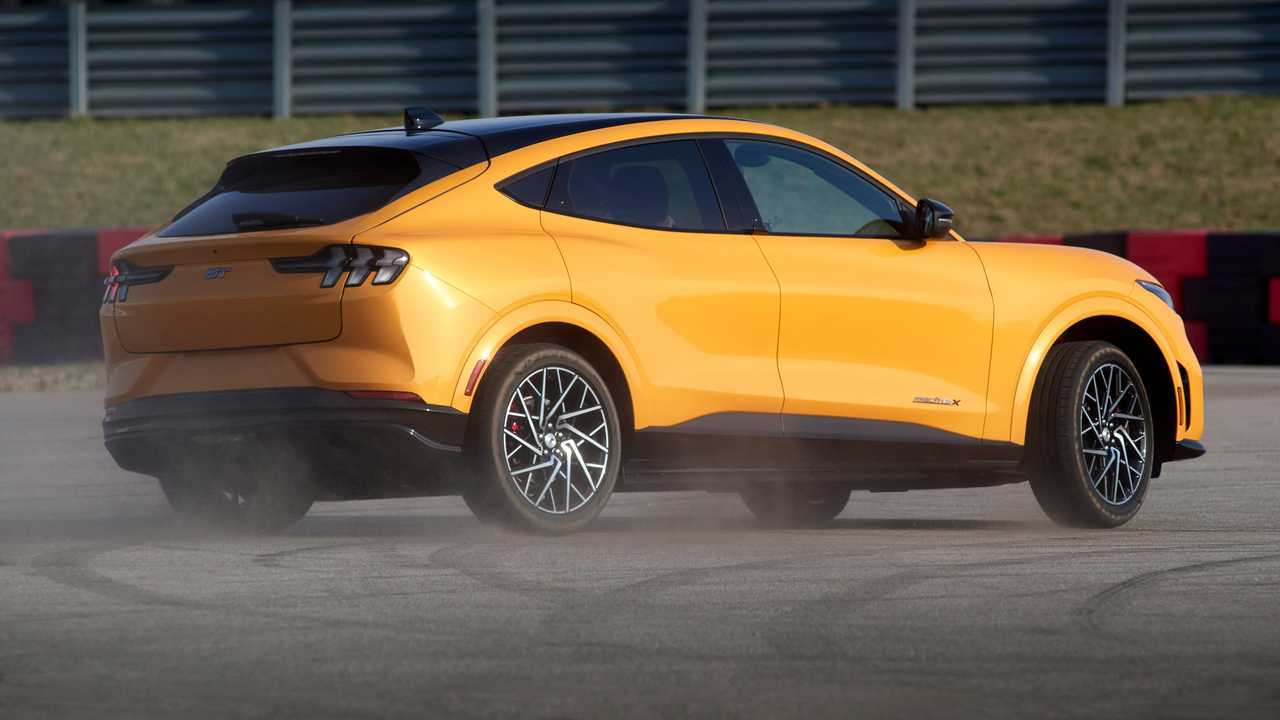 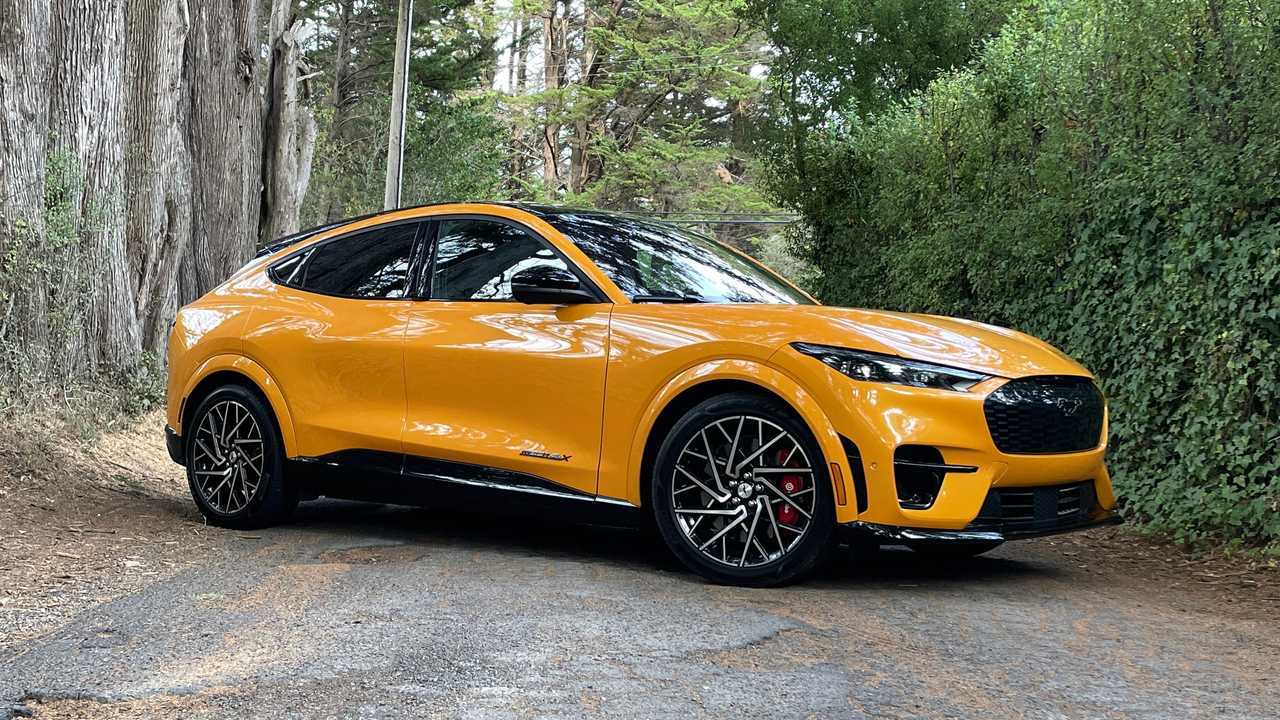 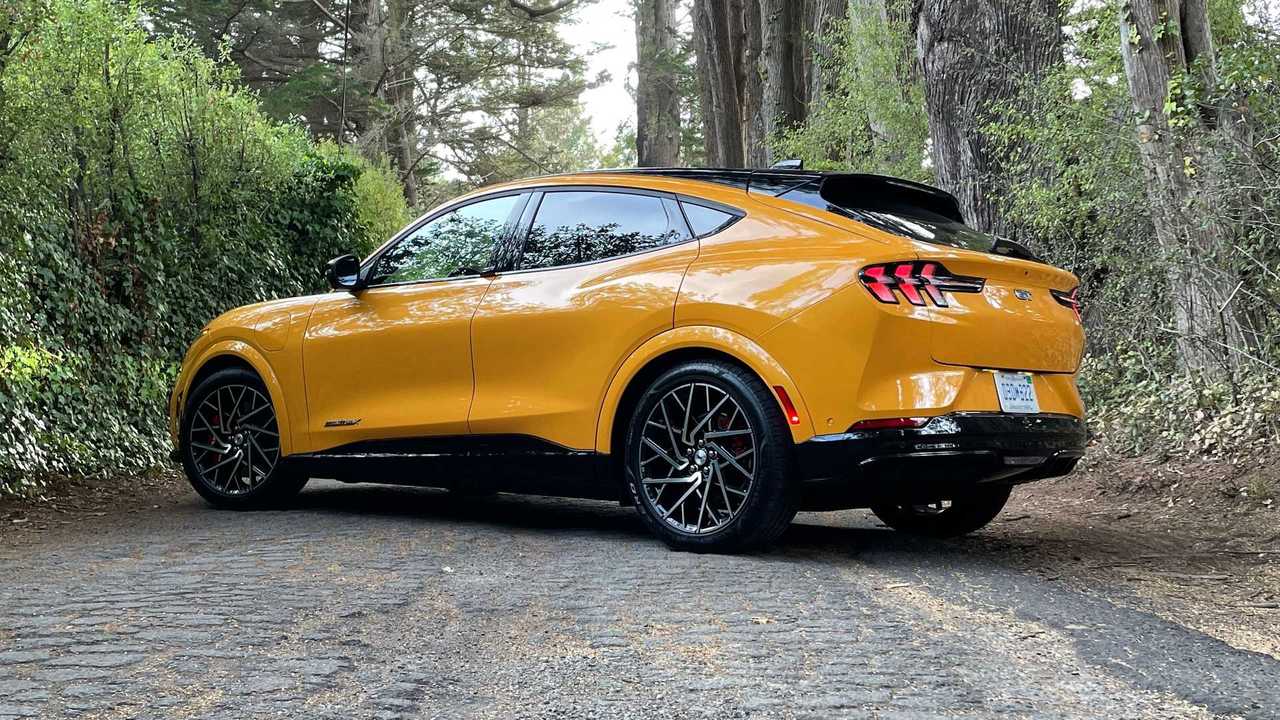 On paper, it all sounds promising, especially since the standard Mach-E is already a decent handler due to its low center of gravity (hooray floor-mounted batteries). Thankfully, the GT mostly delivers on its theoretical promises out on the road, too. Power and torque hit the pavement ferociously when matting the throttle, with more accelerative traction than expected from the relatively skinny rubber. Those aforementioned 0-60 times are utterly believable, with relentless thrust even at extra-legal speeds.

With nearly perfect front-to-rear weight distribution, it’s also easy to balance the Mach-E GT in corners; lifting off the throttle brings the rear around predictably and smoothly, compensating for even ham-fisted drivers. However, it’s not perfect. EVs are usually pretty weighty, and the Mach-E GT is no exception at an estimated 4,850 pounds. Although it does a good job hiding its heft in most situations, tight corners can easily overwhelm the 245-section tires, and the GT doesn’t love trail-braking very much. 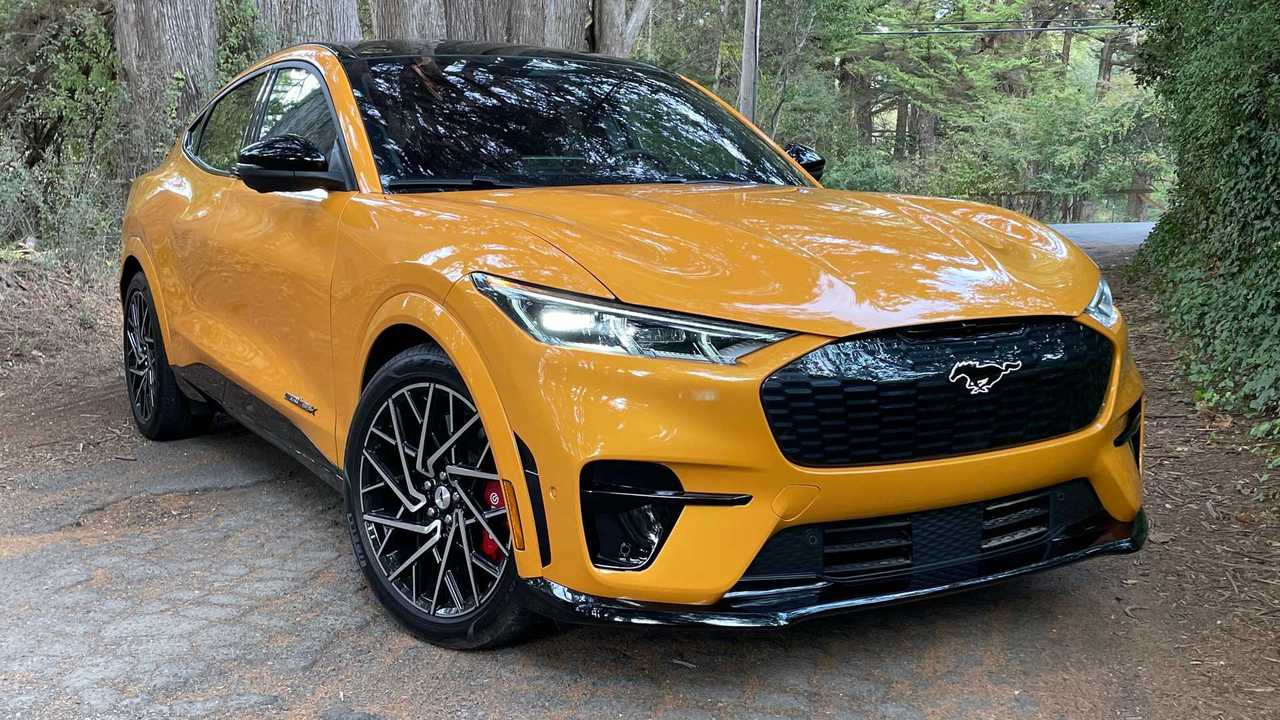 And as on the standard Mach-E, understeer is the order of the day, exacerbated by a somewhat touchy accelerator that can upset weight transfer. Booting it on corner exit results in one of two outcomes – either the front wheels start to push or the rear axle comes around just a bit. Both conditions are easily controllable thanks to the Mach-E’s intrinsic balance, so credit is due there.

The GT Performance Edition’s MagneRide dampers also help, nicely stiffening the vehicle in its most aggressive Unbridled mode and keeping the tires more squarely in contact with the road surface. But then the added torque comes on during corner exit and slightly overwhelms the front tires. Your author is willing to concede that the problem might actually be the person at the helm, because the Mach-E GT explodes forward with no lack of traction when the steering wheel is pointed straight. 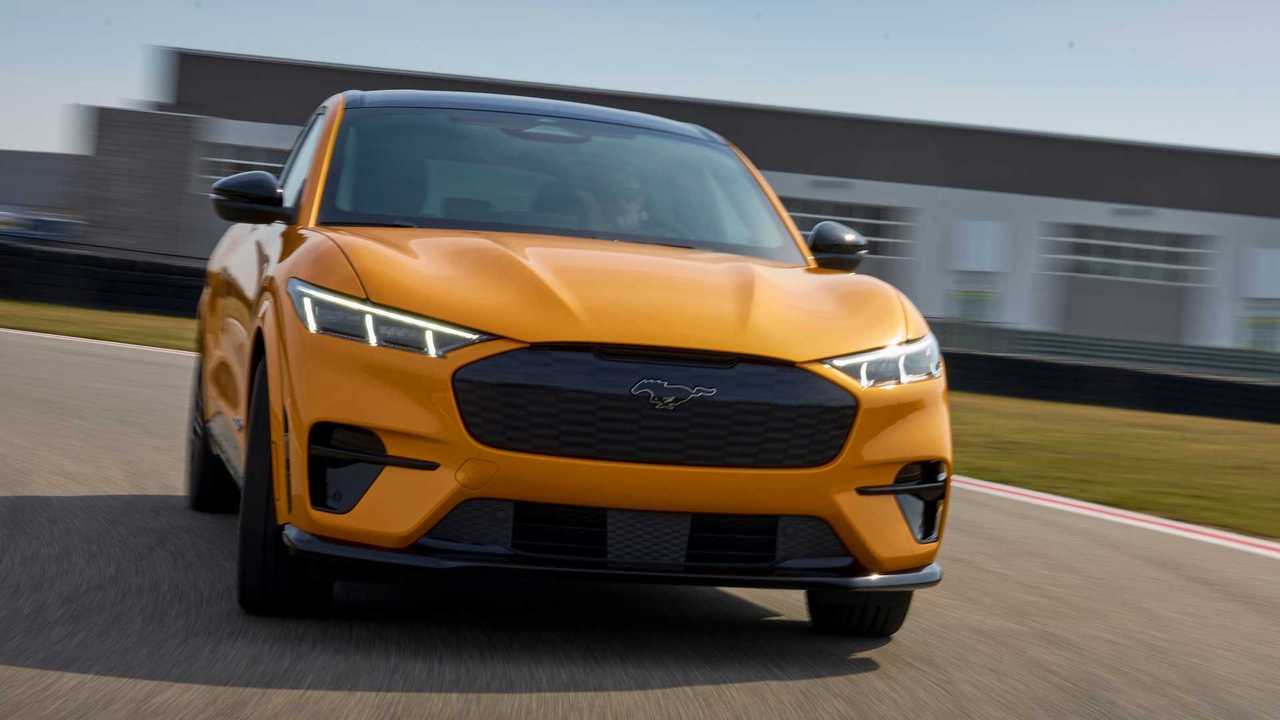 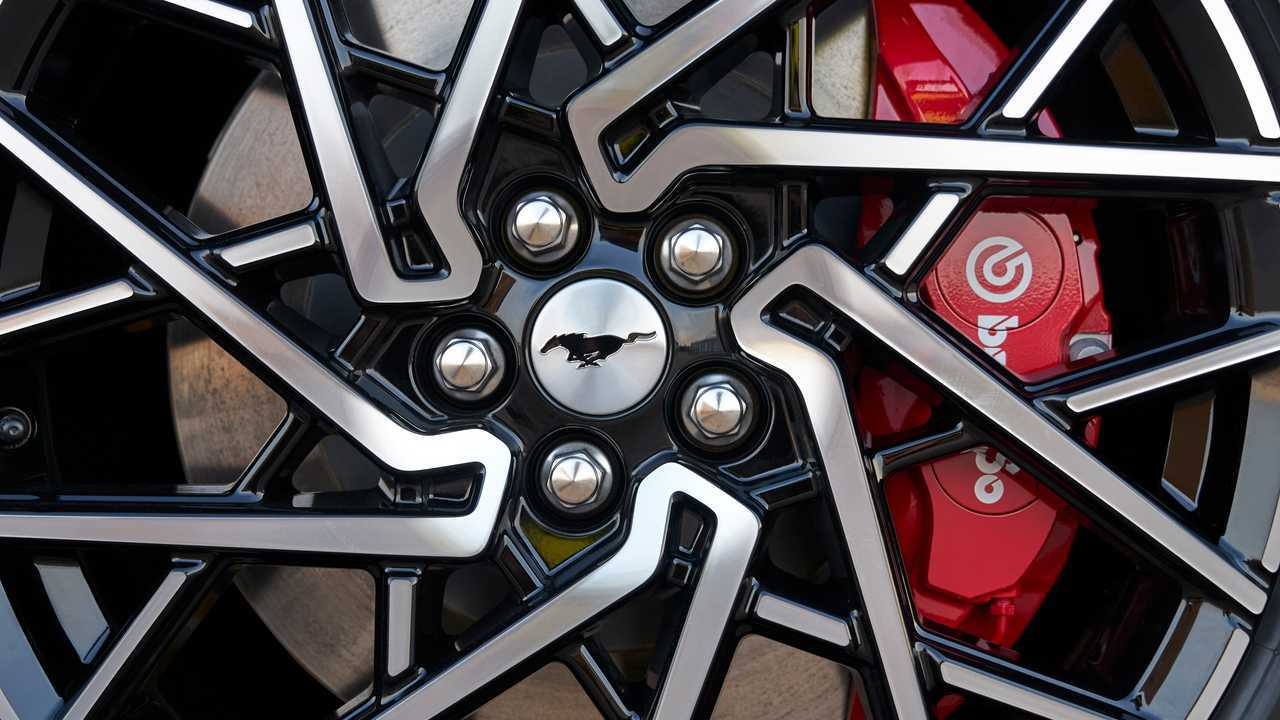 Indeed, the Mach-E GT Performance Edition really came into its own when Ford introduced us to a narrow, long autocross course. The dusty pavement conspired to induce more front-end push – not the car’s fault – but it also allowed us to experiment with different cornering lines and braking zones. With some familiarity, it became much easier to throw down a fast lap of the cones. The key is to wait until just after the apex to begin accelerating, allowing the front tires to devote more of their traction to forward momentum instead of lateral grip.

Riding along with a professional driver – Ford Vehicle Dynamics Supervisor Hether Fedullo – proved the theory. She threaded the cones far more adroitly than we ever could, crediting some of her success to applying the accelerator smoother and later. And even if you’re really committed to mucking about, the Mach-E will still compensate for some tomfoolery, especially in GT-specific Unbridled Extend mode, which is intended for closed courses and autocross. Unbridled Extend draws power from the battery more consistently and splits torque transfer further toward the rear axle, so tail-happy Mustang fanatics will love it. 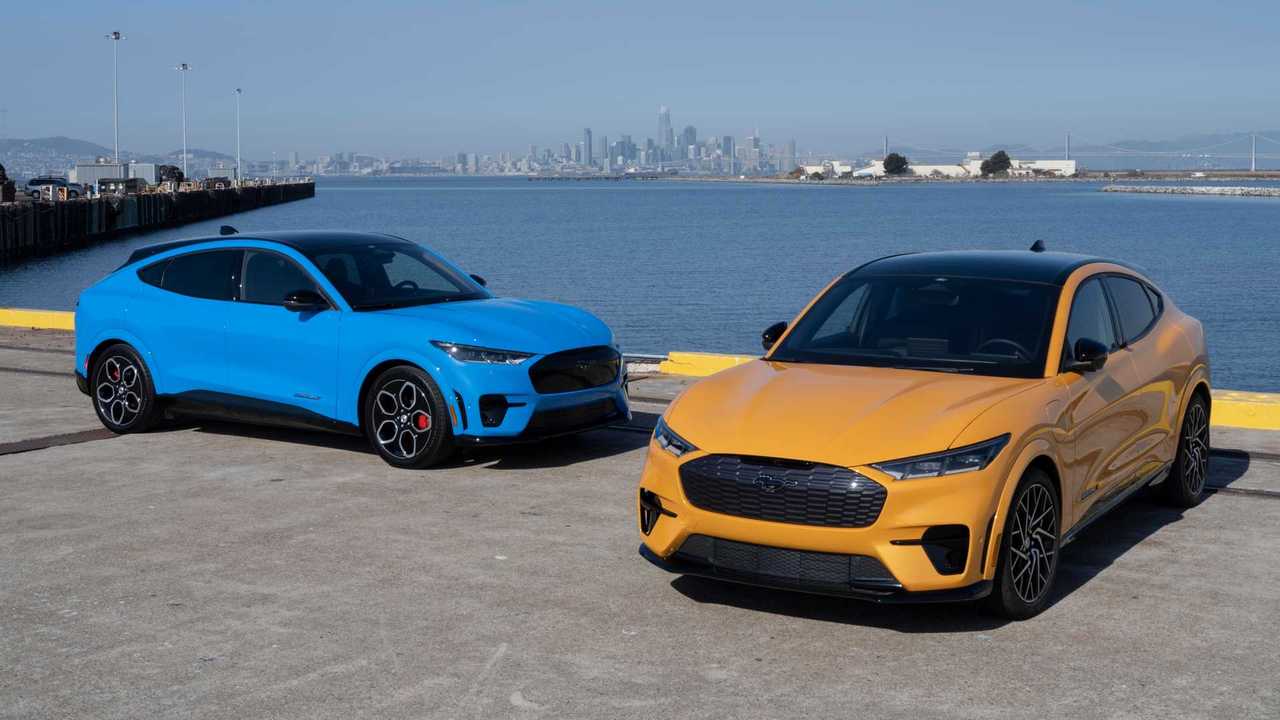 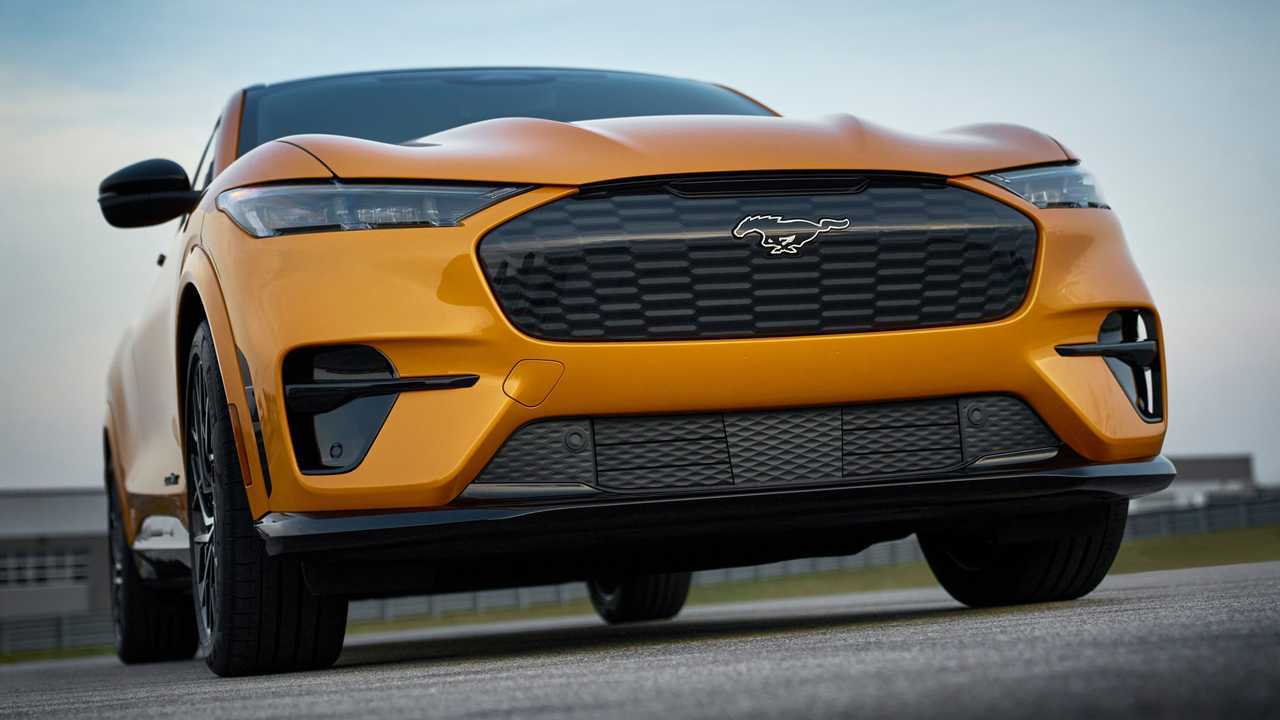 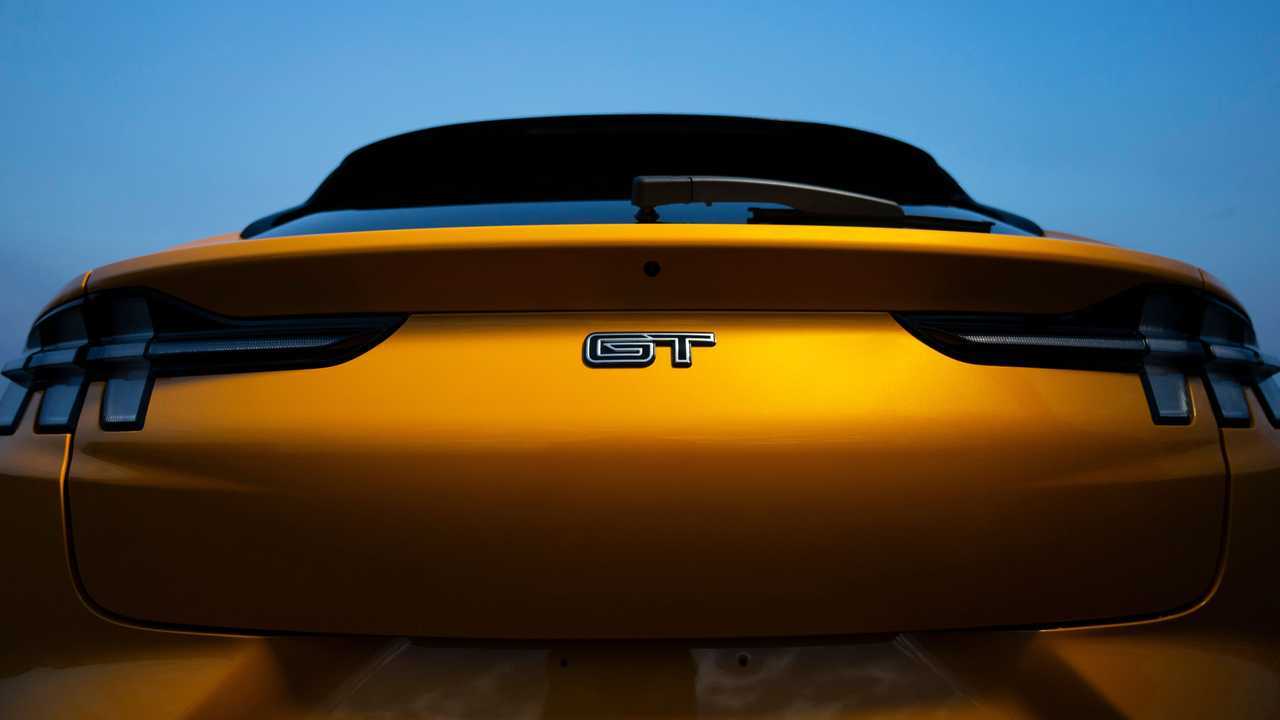 The other big part of the Mustang Mach-E GT experience is purely cosmetic. Ford designers enhanced the sporty EV with a dark-finished grille motif that sports a glossy surface and some neat textures, doing away with the standard SUV’s mustachioed face. The pony badge is illuminated on the GT, giving it an appropriately intimidating visage at night, while a larger front splitter also sends the message that this Mach-E isn’t to be trifled with. Ditto extensive GT exterior badging and black-painted mirror caps. We’re partial to the standard model’s funky aero wheels, though the Performance Edition’s rolling stock is more traditionally sporty.

Inside, the electric pony car gets standard multicolor ambient lighting, unique door sills with metal pony logos and GT lettering, a GT-embossed center armrest, and aluminum appliques on the digital instrument cluster. The base model’s sport-ish front seats make up for their slight lack of lateral support with grippy microfiber suede centers and black faux leather on the seat shells, accented with copper stitching and piping. The Performance Edition ups the ante with gorgeous gray sport seats that feature metallic-looking suede inserts and claw-shaped shoulder bolsters that do a wonderful job of keeping the driver in place. 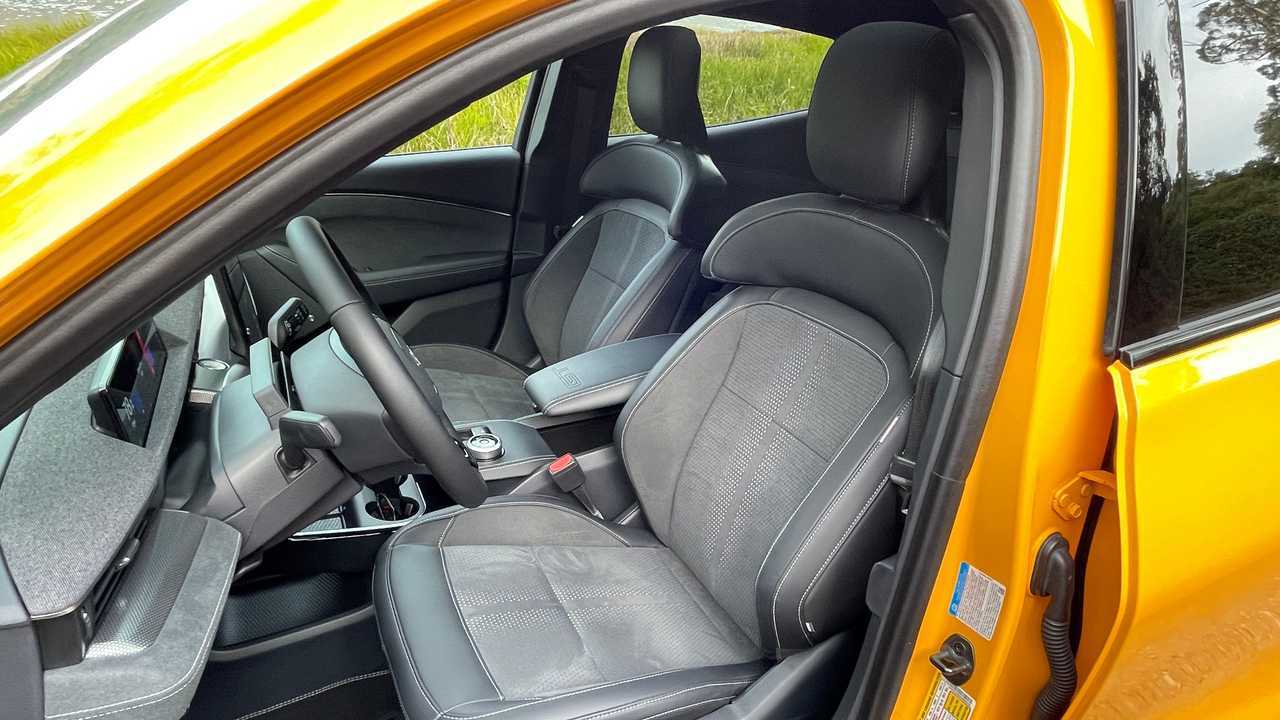 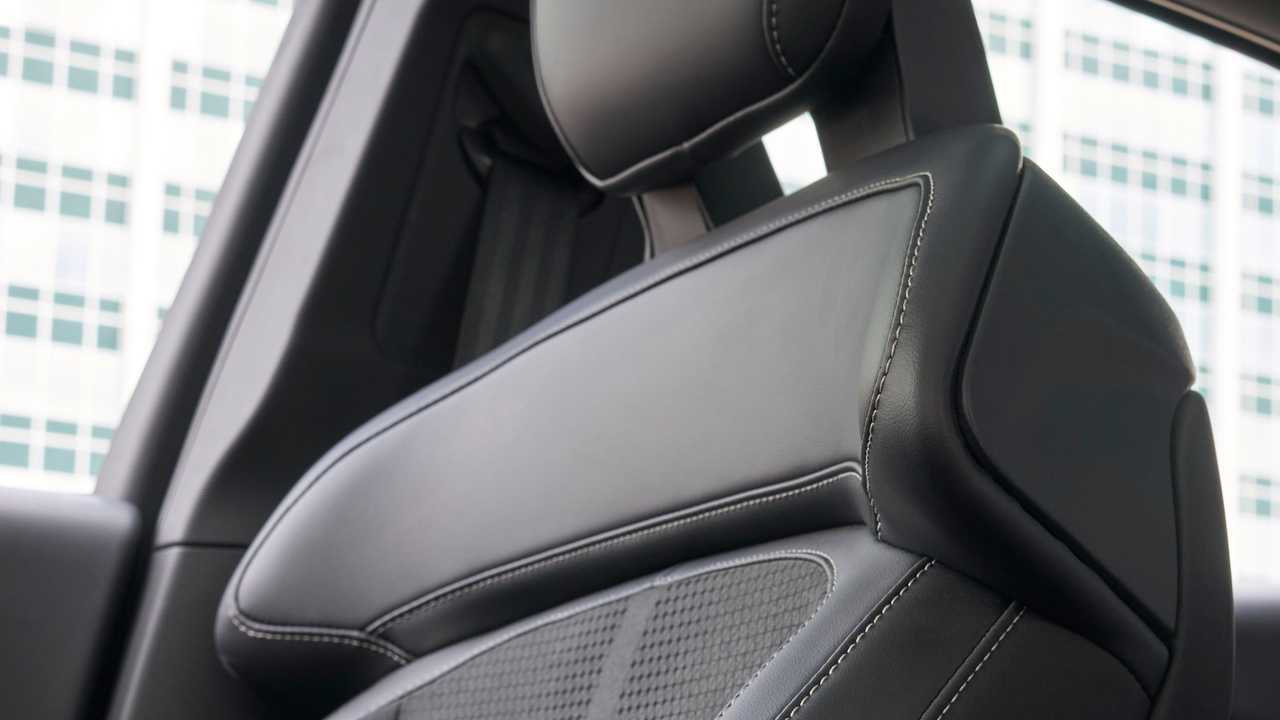 Where the Mach-E GT truly shines is on wider, faster corners, conjuring images of a long trip through the mountains. In such situations, the Mustang is also reasonably comfortable, especially a Performance Edition in Whisper or Engage drive modes – softening the adaptive dampers relative to Unbridled. Road noise from the wider tires is only slightly more prevalent than in the base Mach-E, with excellent manners over all kinds of different pavement surfaces. Bumpy, broken roads make their presence known, though impacts are rarely harsh. Both the GT and GT Performance Edition ride smoothly enough for all but the most spoiled butts.

There’s plenty of space for four passengers and just enough for five, and the GT doesn’t sacrifice any of its lesser siblings’ cargo space for performance. There’s 29.7 cubic feet of room behind the rear seats, going up to 59.7 with the seats folded (a negligibly worse 59.5 if you get the Performance Edition). A 4.7-cubic-foot front trunk carries over as well.

Where the Mach-E GT truly shines is on wider, faster corners, conjuring images of a long trip through the mountains.

It’s out on the open road that we had our first taste of the Mach-E lineup’s newest party trick. On two stretches of Highway 101 north of San Francisco, our GT tester’s instrument cluster let us know that the Mach-E was ready to take over steering duties with BlueCruise hands-free driver assistance. Activating the feature is easy: Simply turn on lane-keep assistance and adaptive cruise control, and the car icon on the dashboard will appear with a large blue halo if BlueCruise is available. If not, a hands-on-wheel icon appears, which will go away once the Mach-E crosses onto an adequately mapped section of road.

Although our 10 minutes of BlueCruise driving wasn’t really enough to test the system to its fullest, it still maintained lane position and kept good space between other vehicles very well. We’d love more time to get accustomed to Ford’s Level 2 driver-assistance tech, but it seems like a decent foil for GM Super Cruise and Tesla Autopilot, at least on its 130,000 miles of mapped roadway. That said, GM claims its system works on more than 200,000 miles of roads, and Tesla purportedly works on any divided, limited-access highway – no pre-mapping required.

The 2022 Ford Mustang Mach-E GT is an impressive achievement at any price, with good performance and electric range as well as a spacious and well-appointed interior. But what’s most impressive is that Ford was able to bring the Mach-E GT to market for $59,995 plus $1,100 destination (only a bit more than the $54,595 Mach 1 fastback). Even the GT Performance Edition starts at a reasonable $66,095 with handling charges, an impressive price for the scoot on offer. With BlueCruise technology and a black-painted roof, our nicely equipped base model cost $63,285, while the Cyber Orange Performance had a sticker price of $69,800.

The comparably sized Tesla Model Y Performance starts at $61,990 and hits 60 mph in 3.5 seconds, with an EPA range of 300 miles. Even so, we’d probably prefer the Mach-E GT’s nicer interior, Ford-backed quality control and warranty, and attractive fastback styling. However, many will be comparing the Blue Oval EV with other Mustangs, and those folks will find lots to appreciate as well. Explosive acceleration, a spacious interior, long-distance legs, and a hint of understeer that goes away with some heavy throttle? Sounds like a muscle car to us.

There was a news circulating that Toyota Pakistan is going to introduce changes in Toyota Revo, and today it has happened. According {...}

Audi has revealed an ultra-luxury version of the A8 L called Horch. It features an upgraded rear seat and some {...}