2022 Honda Passport TrailSport First Drive Review: Out Of The Suburbs, Into The Sand

The Passport was always a bit of a strange nameplate for Honda to resurrect from its back catalog. Its original incarnation, from the late 90s, was better known as the Isuzu Rodeo in the States. It was a badge-engineered, two-box, two-row SUV in the days before crossovers had become the vehicle de jour for suburb dwellers and weekend adventurers.

And Honda’s initial re-introduction of the Passport moniker in 2018 – after a sixteen-year absence from the market – seemed a bit bland. Slightly more rugged than a CR-V but smaller than a Pilot, even within its own brand it felt a bit neglected, as though the Passport still couldn’t quite shake the rebadged vibe even once it was fully designed in-house. Now Honda is bringing more punch, added style, and capability to the name with the 2022 Passport TrailSport. 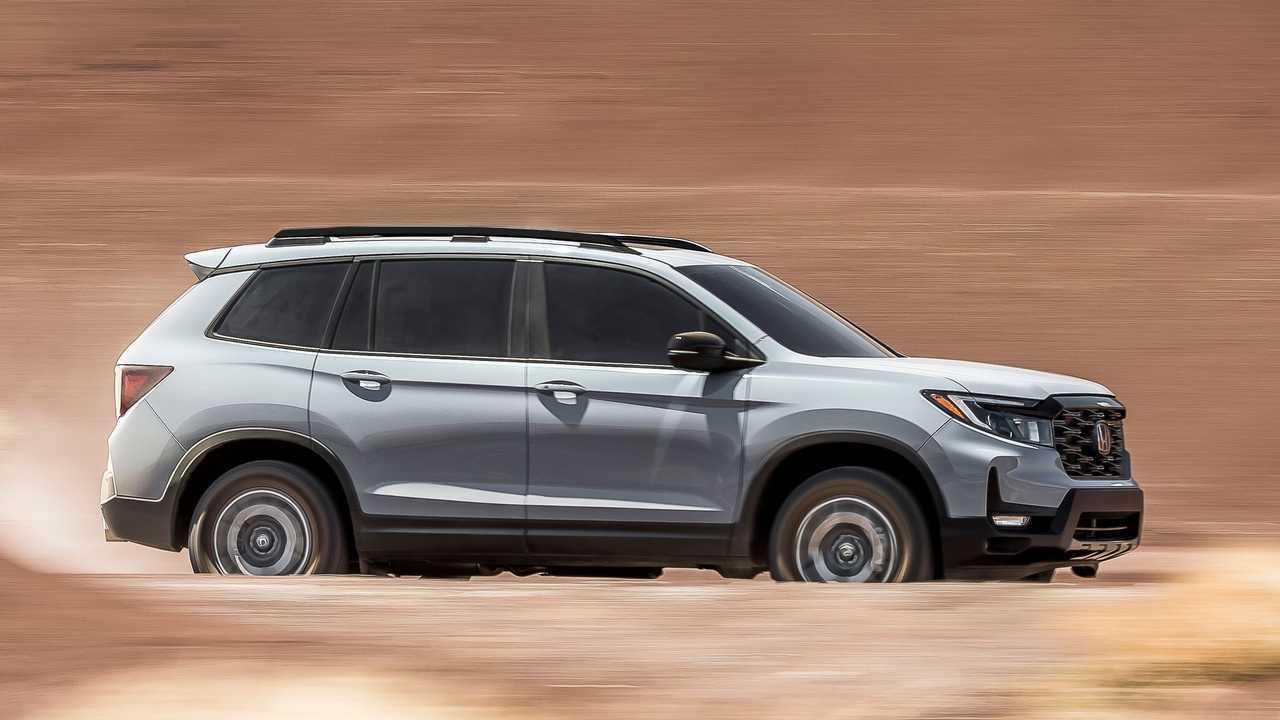 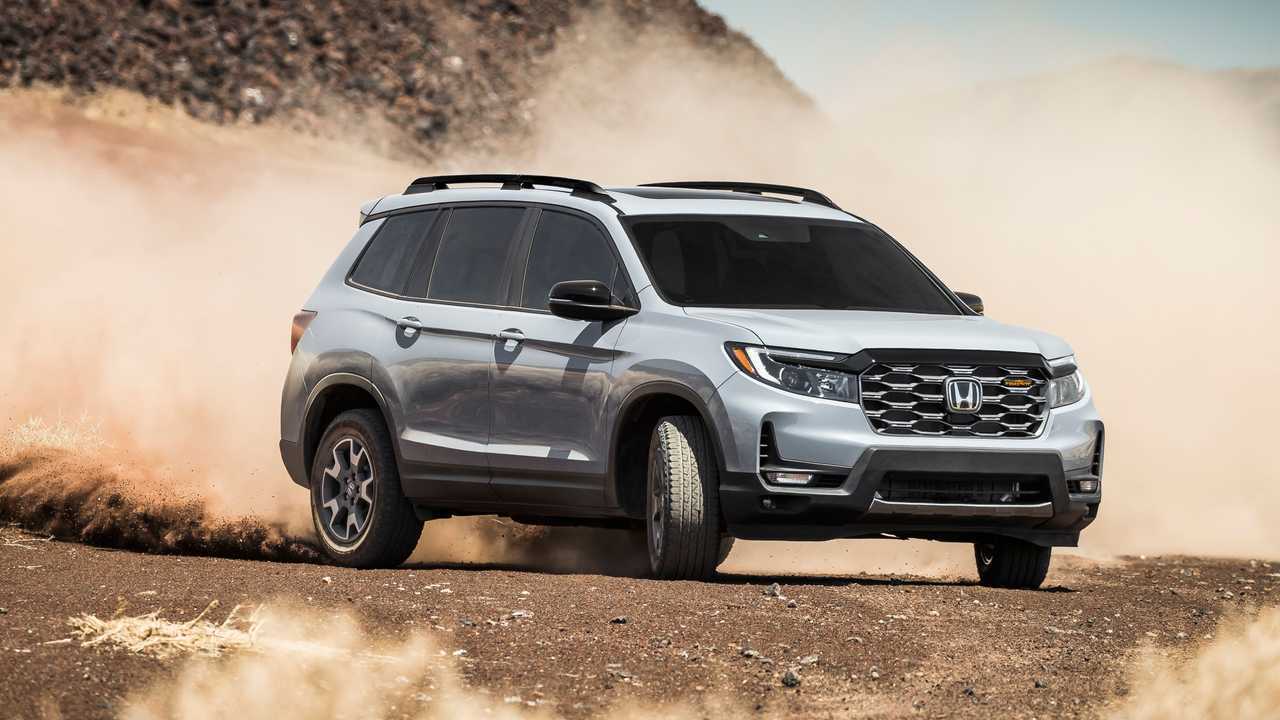 Already, the base model Passport EX-L AWD is a compelling package at $39,970 (plus $1,225 destination). All varieties of Passport (including TrailSport) are mechanically identical under the hood, with a 3.5-liter V6 mated to an excellent ZF 9-speed automatic. It comes standard with Honda’s i-VTM4 all-wheel-drive, and pushes out a respectable 280 horsepower and 262 pound-feet of torque to all four corners. Leather seats, an 8.0-inch touchscreen with standard Apple CarPlay and Android Auto, wireless phone charging, and the fantastic Honda Sensing driver-assistance suite also come standard on every Passport.

For $2,500 more, or $43,695 (including the $1,225 destination charge), the TrailSport is a bit more rugged for those seeking the trail-runner aesthetic and a few extra goodies. The variant adds extra undercarriage protection, folding mirrors, navigation, roof rails, a heated windshield to prevent wipers from freezing to the glass in more extreme climates, and the all-important appearance package.

But wow, that look works. Gone is the anonymously nondescript front end of the pre-refresh Passport; the newest TrailSport gets a much more rugged – and handsome – face with the grille finished in gloss black and orange accent details throughout. The TrailSport-only Sonic Gray Pearl paint of my test vehicle looked great both on the vacant pavement of the abandoned Salton Sea Riviera and in the middle of the valleys of Palm Desert. Honda carried over all of the rugged stylistic cues from the now-tougher Ridgeline, and it helps the TrailSport stand out in seas of similarly styled two-row crossovers.

None of this should overshadow the fact that the Passport – in any trim – is a well-executed two-row CUV. The interior is comfortable and the standard leather is plush for its price point. It possesses the correct blend of physical switches and touchscreen functionality to feel modern without being frustratingly digital or overly cluttered with analog controls.

Honda’s modern light-truck gauge cluster – with a sharp, well-designed center display screen surrounded by traditional fuel and temperature gauges – is eminently readable at a glance. The leather heated seats are a comfortable place to eat miles on the freeway, and it’s downright cavernous for a two-row with 41 cubic feet of cargo capacity. (Compare that to the Jeep Grand Cherokee’s 37.7 cubes or a paltry 32.5 in the Subaru Outback Wilderness, for instance.) 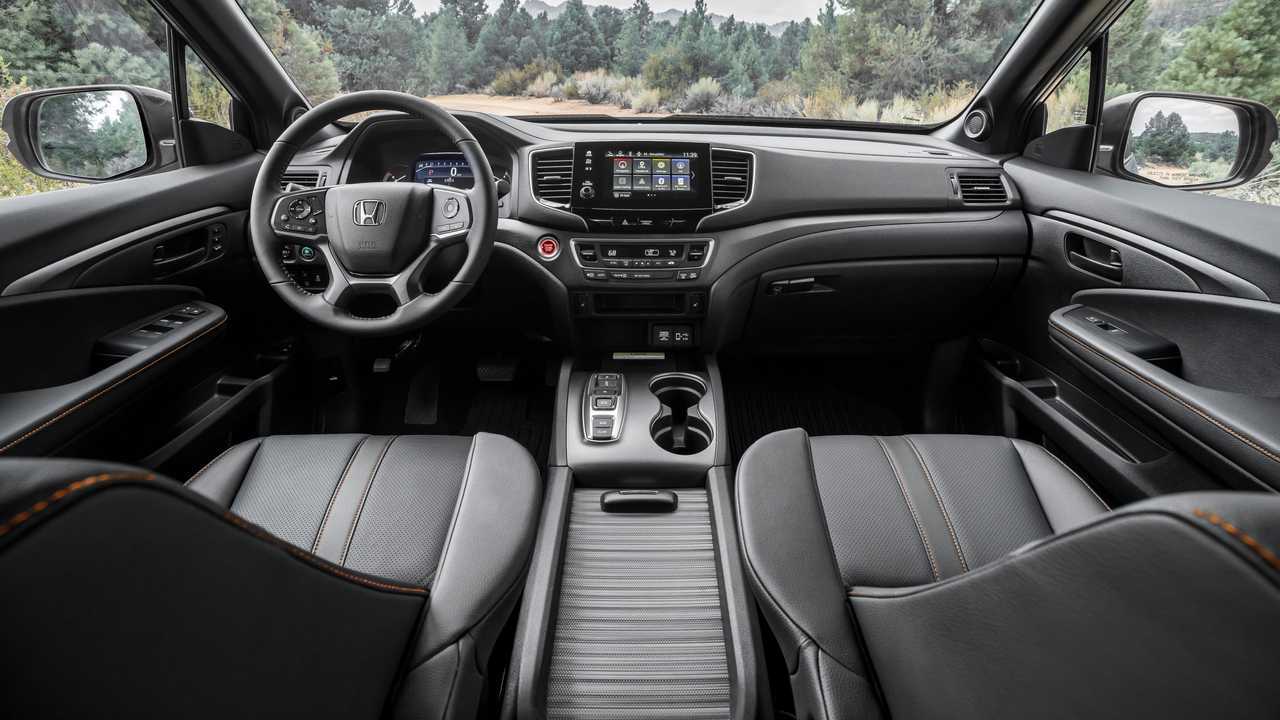 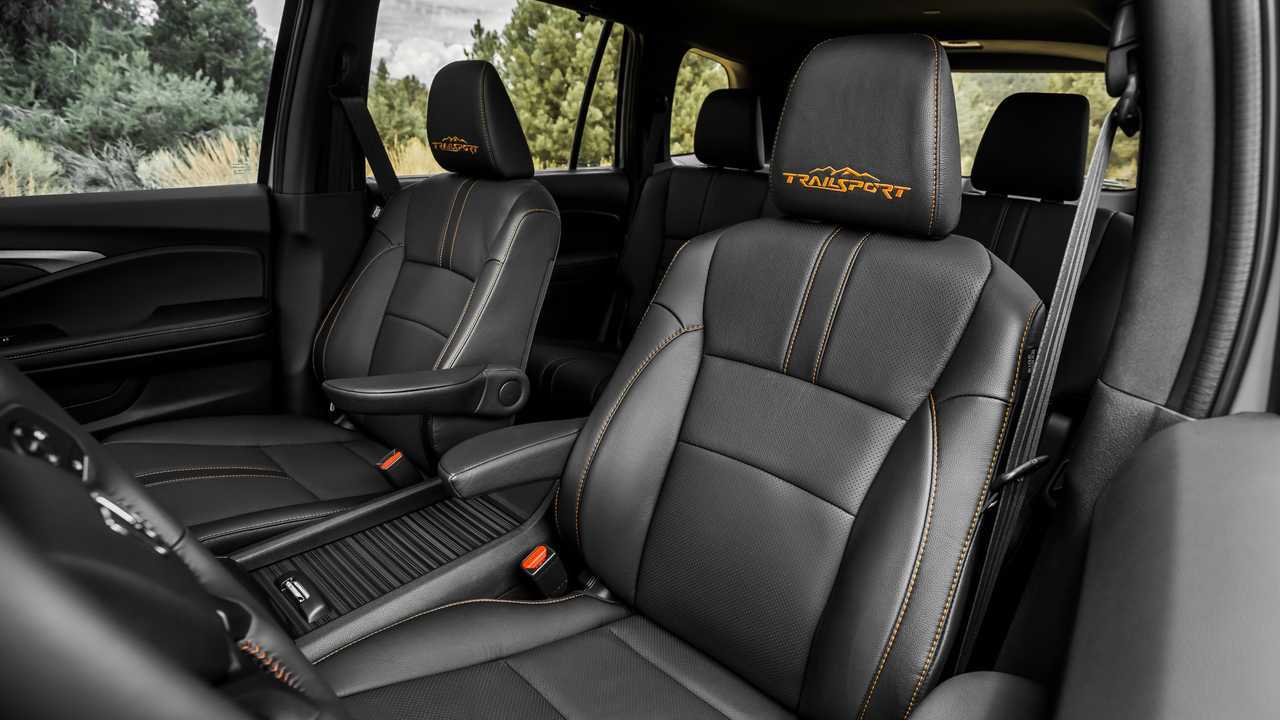 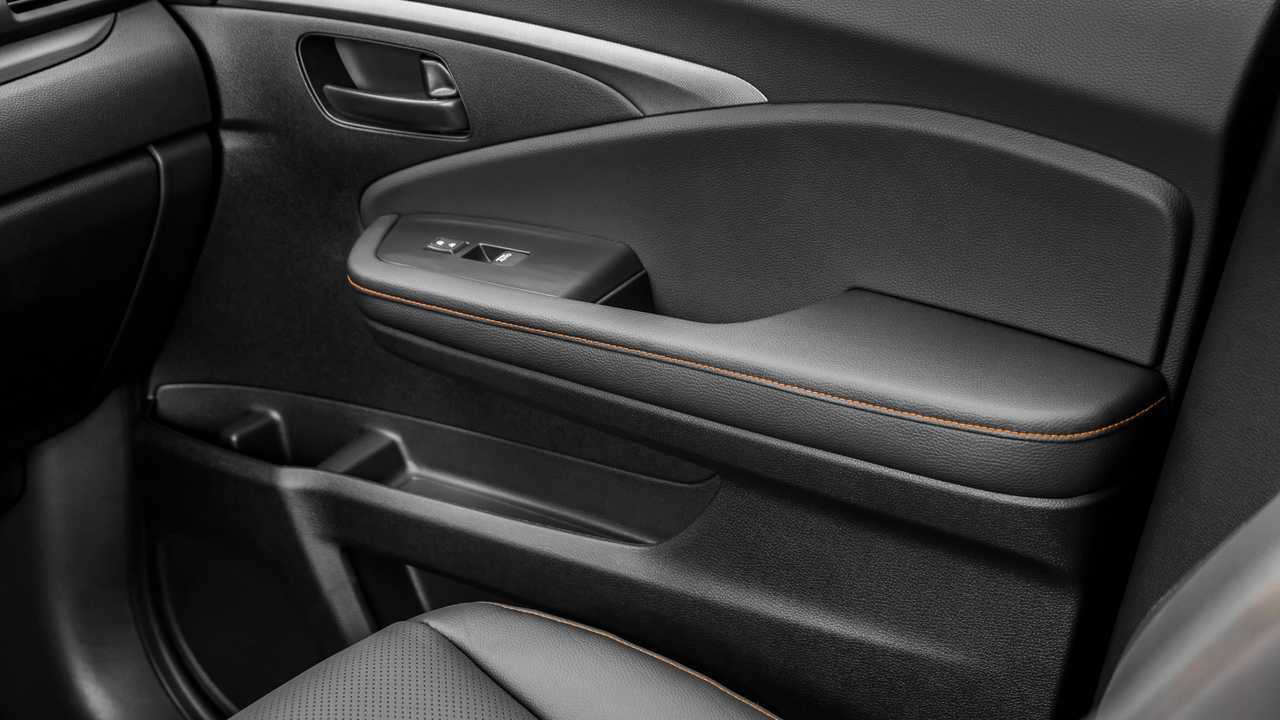 Drive To The Desert

As I headed through the paved paradise of Palm Springs, I found the Passport an excellent city driver. Steering is communicative and reasonably sharp, and this CUV feels much less massive than its 4,229-pound curb weight would suggest in quick maneuvers, as I dodged slow-moving Buicks through the urban paradise.

The nine-speed shifts with smooth but rapid response as long as you let the computer do its thing; I found the standard manual mode laggy and unenjoyable, but then again, if you’re a paddle-shifting enthusiast, the Passport is perhaps the wrong vehicle for you. The suspension is slightly on the firm side, but it was nothing I found excessively jarring, and on roads not pockmarked with governmental indifference, the ride was plenty pleasing.

But the TrailSport represents more than an in-town commuter for Honda. The new badge is intended to carry the entire brand to the overlanding conversation that’s so in right now, and so the Passport TrailSport is Honda’s opening salvo in the off-roading clash. While chugging away miles on The 10 is a useful attribute for any CUV to have, the true test of the TrailSport’s prowess will be found miles off the pavement, summiting rocky trails to remote campsites. 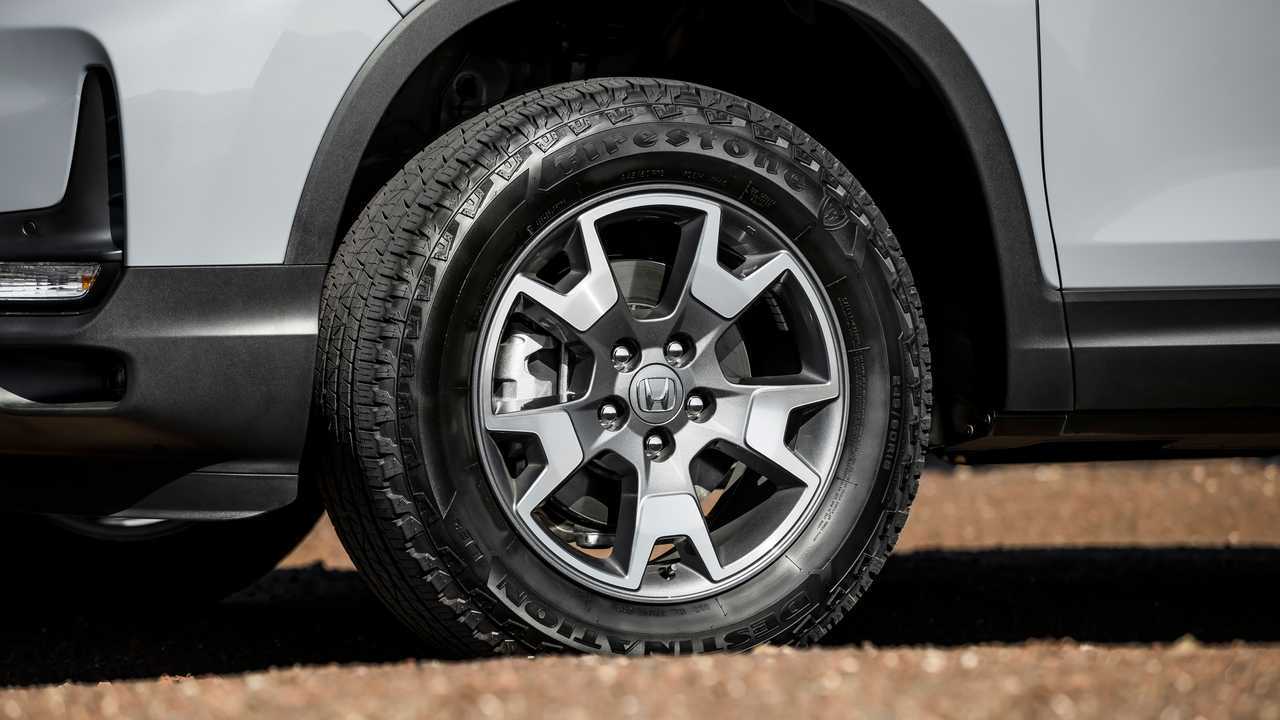 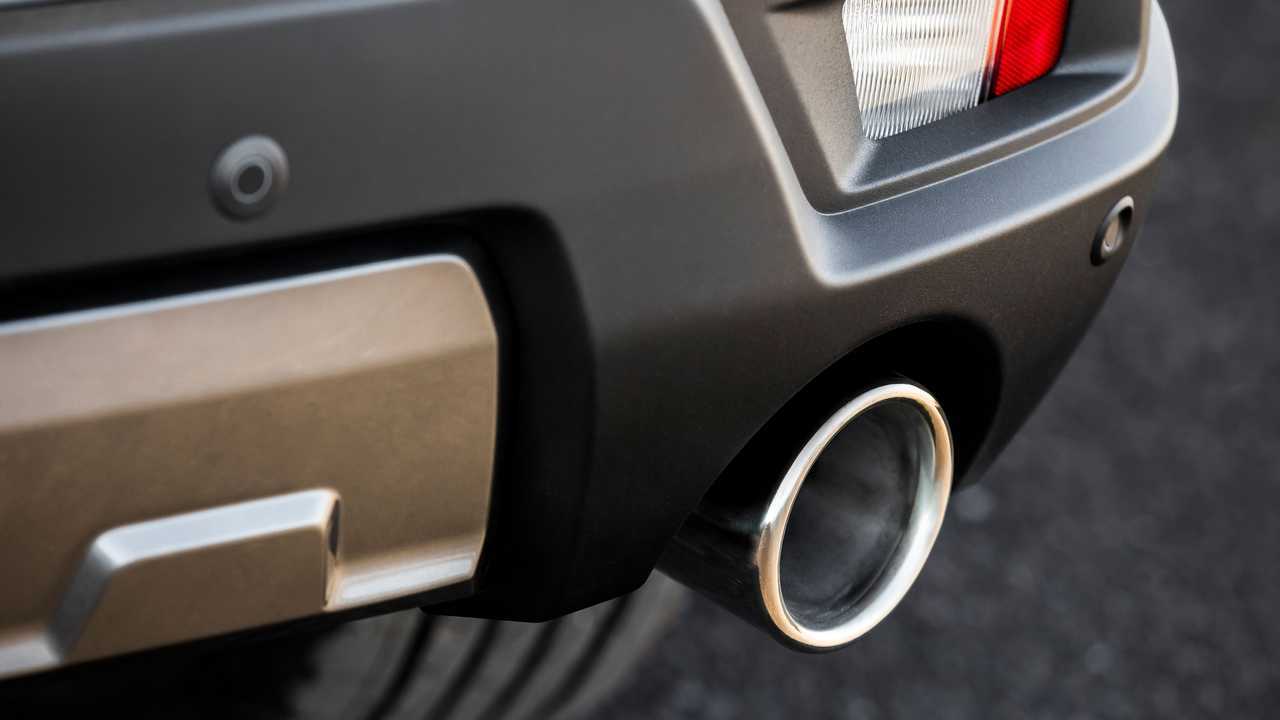 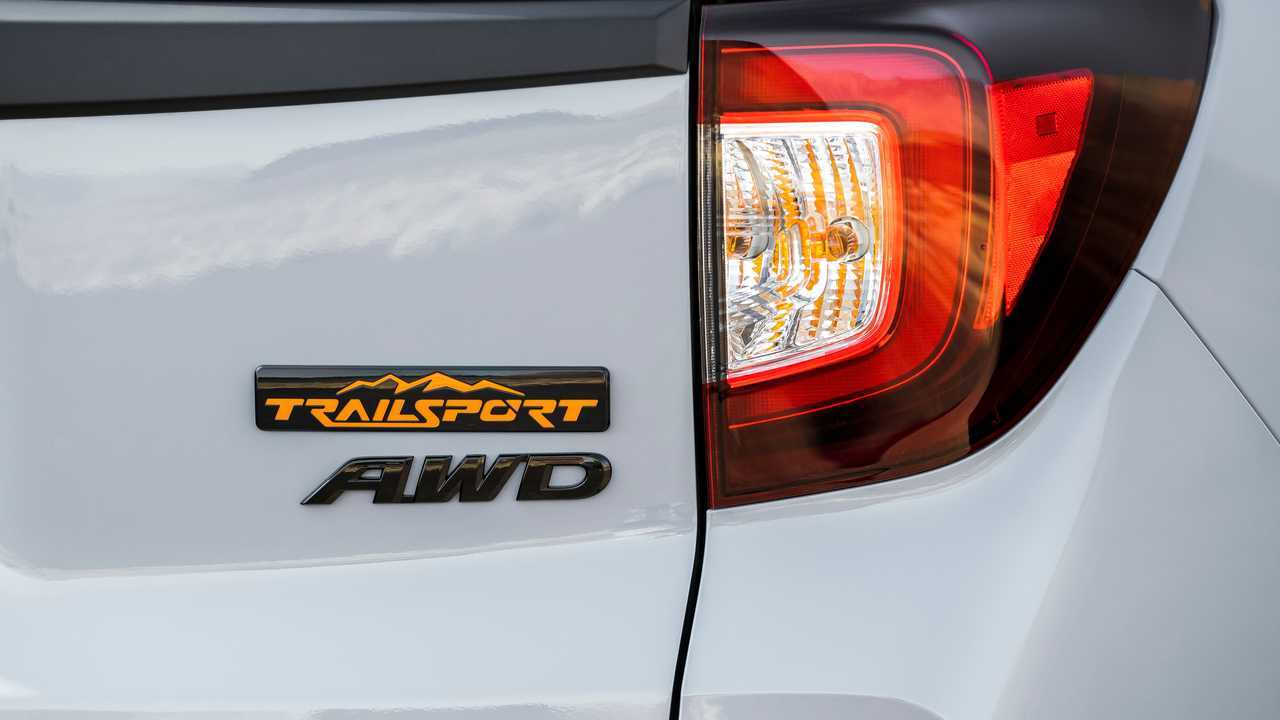 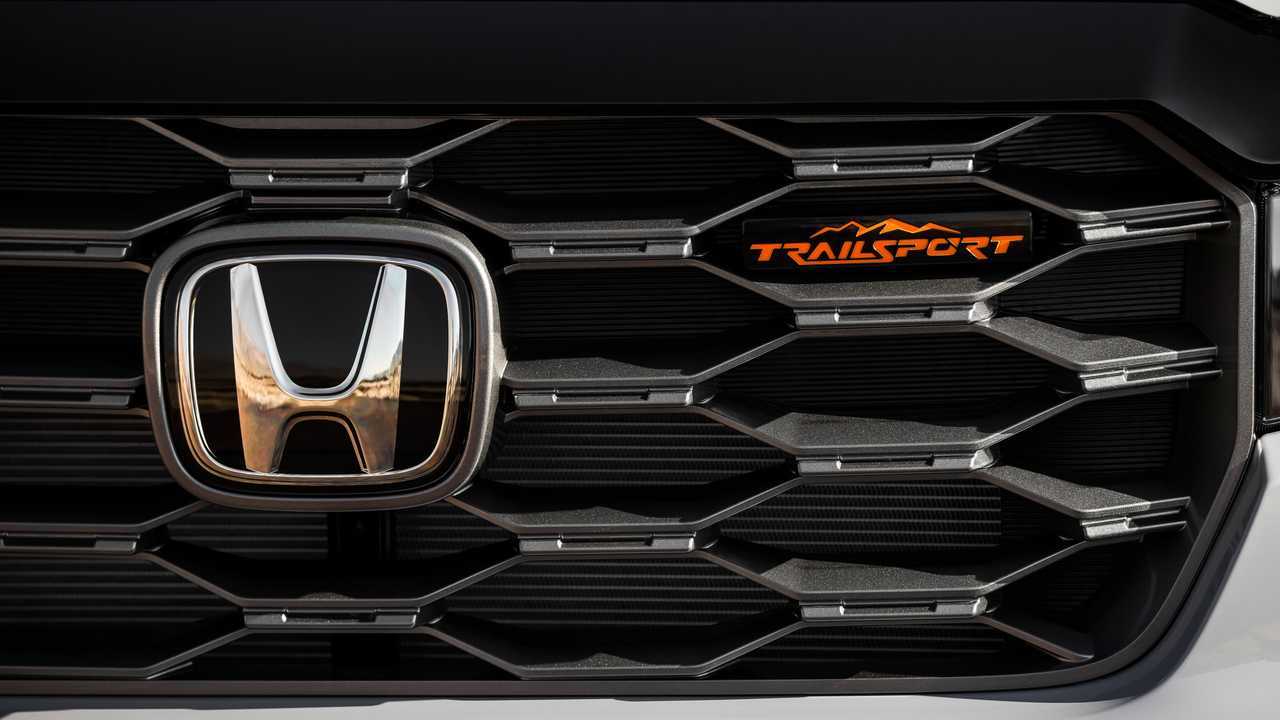 With this in mind, Honda flew me out to the remote four-wheel-drive playgrounds wedged in the desert valleys between the Salton Sea and Borrego Springs and asked me not to knock the mirrors off its newest creation on canyon walls. I was more than happy to oblige. With 8.1 inches of ground clearance, this Passport seemed setup to handle the 4WD-Only trails the government helpfully marked on Forest Service maps in my GPS apps.

And off-road, the main thing that I learned is that Honda has perfected the all-wheel-drive formula for front-drive-biased crossovers. The i-VTM4 system on the Passport allows up to 70 percent of power to be sent to the rear wheels; of that 70, 100 percent can be directed to the left or right corner. That system is one of the most effective – and enjoyable – I have driven in the modern FWD-biased era of crossovers. In wide open spaces, with the Sand traction mode allowing more slip, mat the throttle, get the rear wheels spinning, and the TrailSport allows McRae-esque powerslides without ever feeling close to the ragged edge of control. 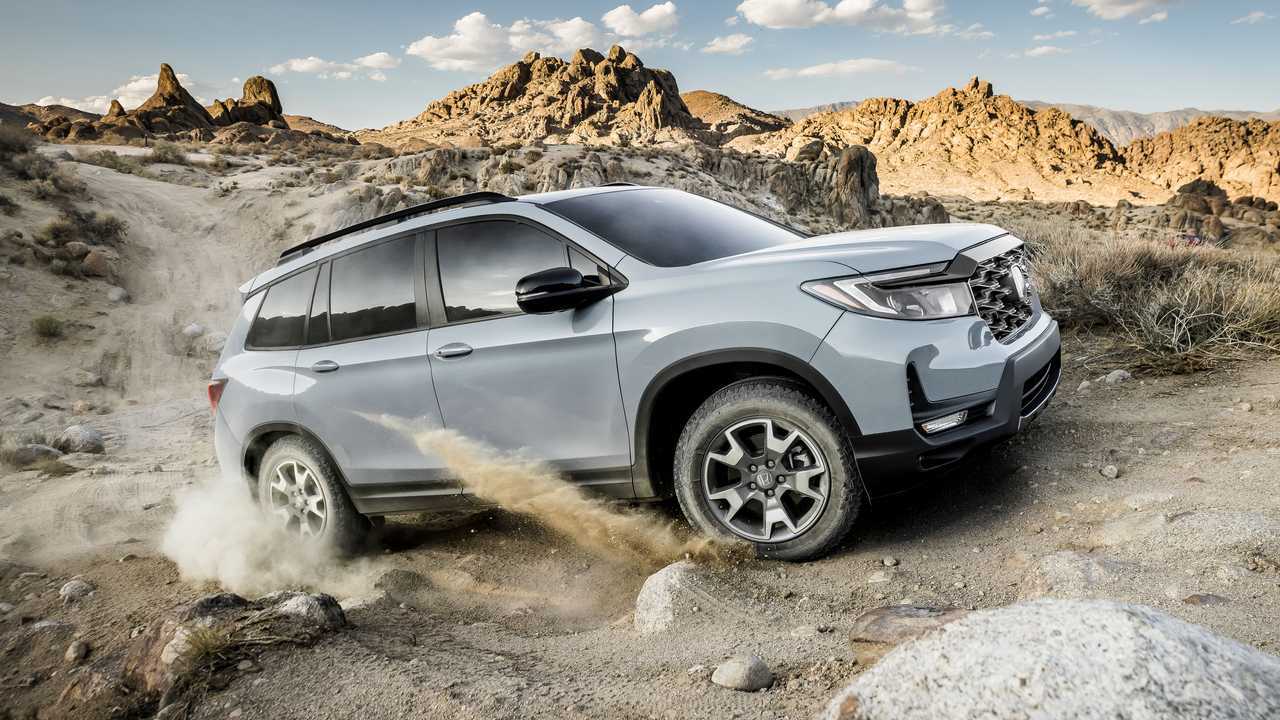 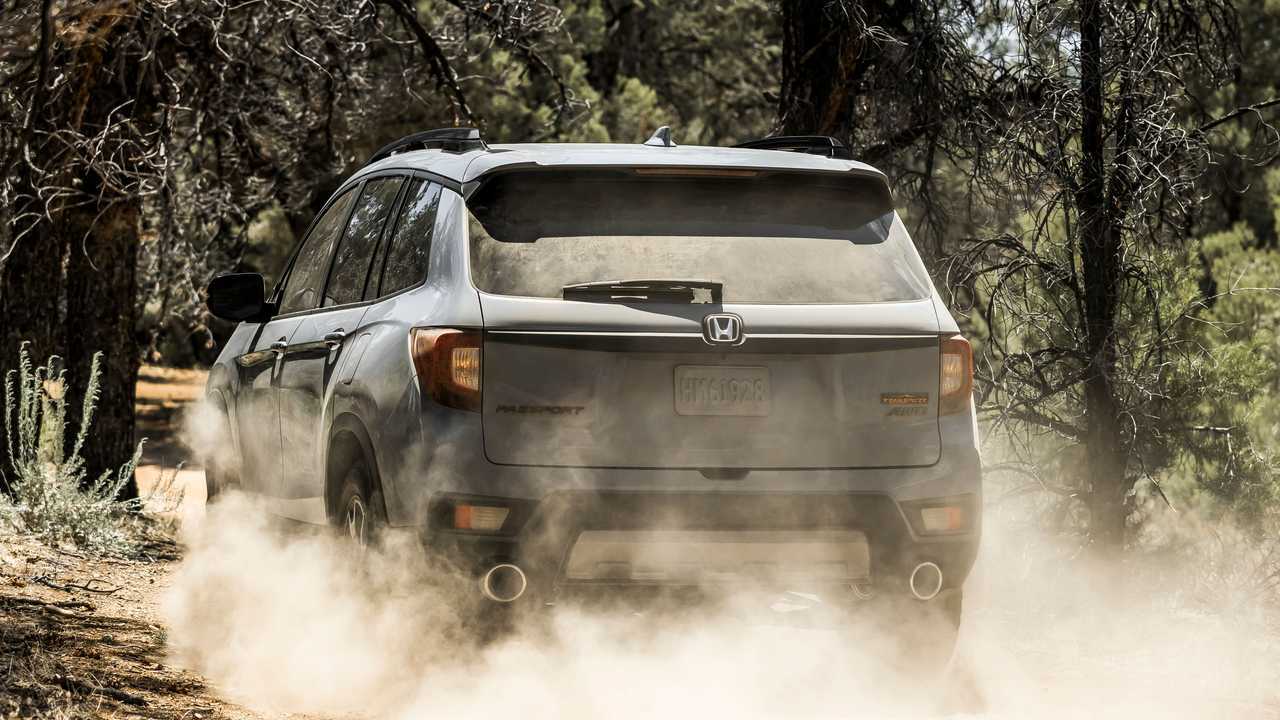 Hit the tight, technical trails, and when the independent suspension fails you – leaving wheels hanging off the sand – the i-VTM4 will carry that weight, assigning power to the corners left with traction. The all-wheel-drive’s intelligence made trickily graded sections of trail a skill-free exercise for me, because throttle, not finesse, is all that was needed to traverse the territory usually ruled by solid-axle offerings.

The TrailSport, as mentioned before, offers 8.1 inches of ground clearance – still approximately one and a half inches less than the competing Subaru Outback Wilderness. But neatly tucked control arms and skid plates allowed me to straddle rocks that I would fear taking out an oil pan or tie rod in a less-offroad-focused crossover. The rear departure angle at a shockingly aggressive 24.3 degrees was enough for me to never nervously glance at my mirrors, waiting to drag the bumper off on a dry river crossing.

The TrailSport isn’t without its offroad flaws, though. The suspension – which offered a ride verging on harsh in the cities – is downright punishing on even the slightest whoops. And taken as a whole, suspension travel wasn’t enough to be reassuring, leaving me teetering on two wheels more often than I would like.

I do love the style of the new and rugged front end, but the redesign also means sight lines are reduced. That left me hanging out the driver window like a golden retriever as I tried to spot rocks ahead, that the 21.1 degrees of arrival angle might not offer a chance to clear. And finally, Honda’s insistence on rugged-looking all-season tires rather than true all-terrains meant that the all-wheel-drive needed to work significantly harder to extricate me from sandy washes than it really should have. 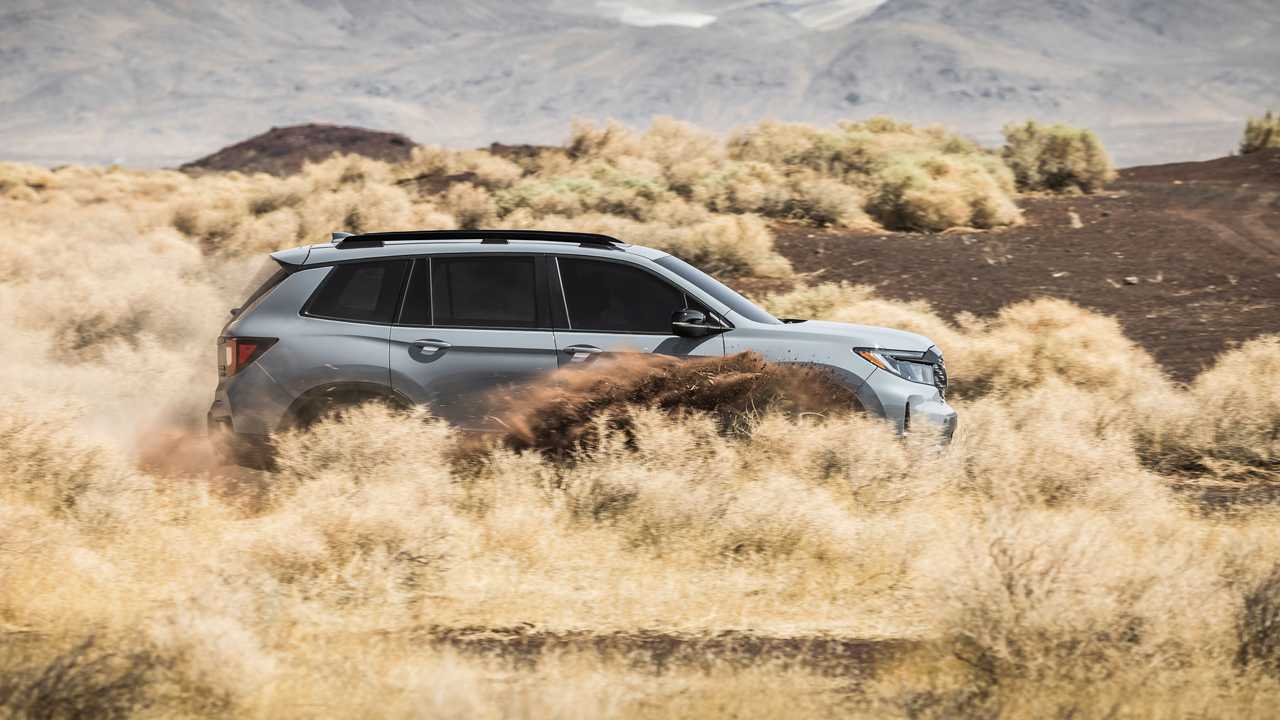 Overall, the Passport TrailSport is a substantial statement of intent, and a solid base of off-roading prowess. Throw some A/Ts on a Passport with all-wheel-drive and I have no doubt it could wheel with the best of the crossover trail-runners on the market today. And Honda has assured me that a model with real all-terrain rubber will be coming in the near future. After all, the company campaigns a Passport with M/Ts in North American rallies, and a ride in that almost-bone-stock machine convinced me the future of rally racing is tall and boxy with the extra ground clearance a Lancer Evo or WRX STI could only dream of.

Honda’s shown beyond a doubt that for those seeking a capable, weekend-camping-ready SUV with on-road manners to rival a sedan, the TrailSport is a compelling choice. If you’re hoping for truly terrifying off-road mastery, though, I would suggest springing for a set of all-terrains a little before Honda’s ready to, and watching the i-VTM4 work pure magic through the silt and sand of the Mojave.

Javed Afridi is back in action once again, this time tweeting about the new MG cars being put on display {...}

There are a lot of interesting anecdotes that can be picked up during a vehicle’s development. Some of them are {...}

Back then, 200 mph was reserved for supercars and low-slung sports cars. These days, even lumbering luxury crossovers can get {...}