Lexus used to make cars that were, in a word, fine. Offering practicality, reliability, and comfort, they neither excited your senses nor offended your sensibilities. But those days are going away, thanks to bold styling, artful interior textures, and performance haloes like the lovely LC 500 and bygone LFA supercar.

One holdover from that old way of thinking is the current NX. Introduced for 2015 and based on the contemporary RAV4, today’s NX offers a passionless luxury ownership experience, and its somewhat flexy bones mean it’s not terribly enjoyable to drive on a mountain road. That all changes with the 2022 Lexus NX, which embraces its siblings’ refined styling and delivers impressive poise over bad pavement thanks to a stiff new Global Architecture-K platform shared with the ES sedan and several Toyota models. 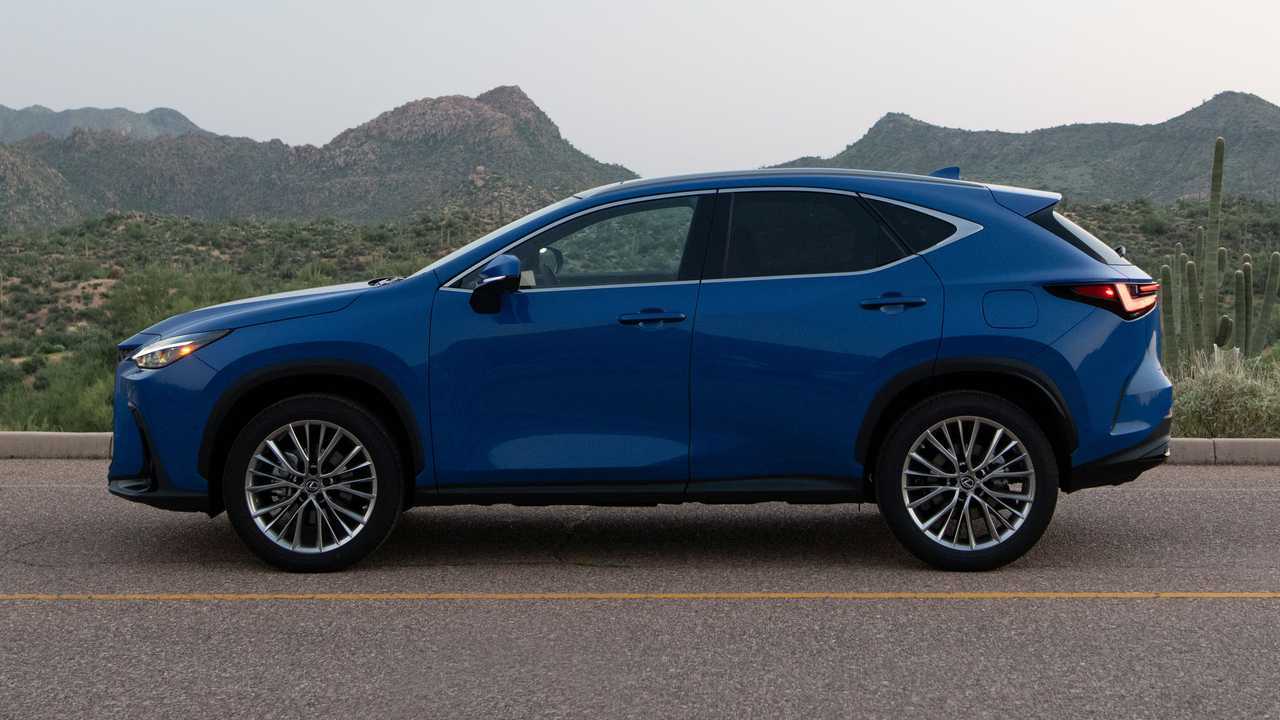 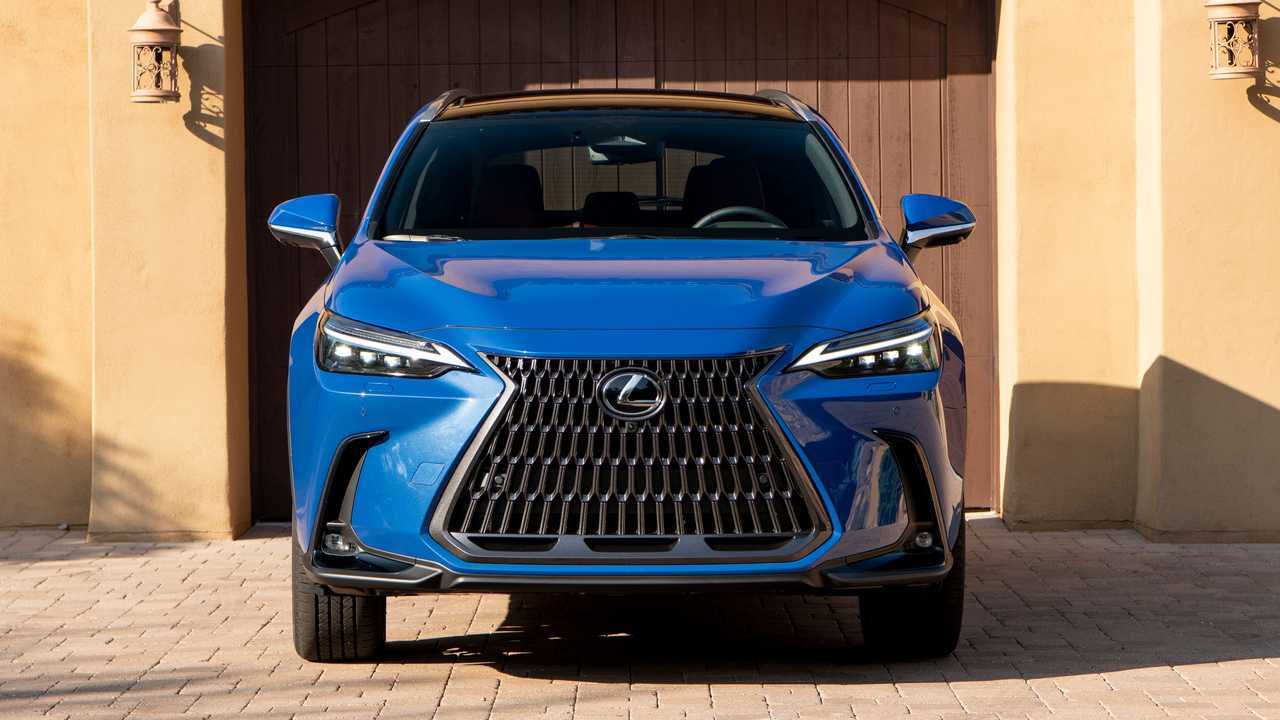 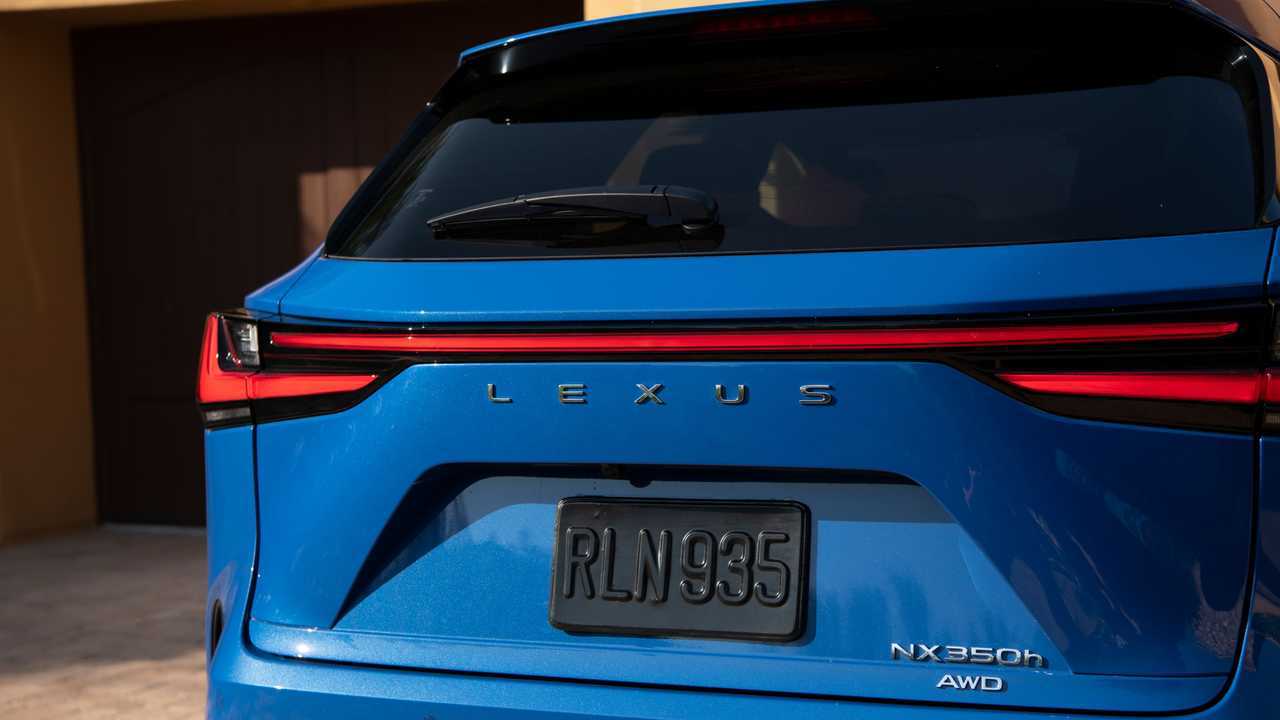 In spite of the new platform, it’s difficult to see the differences between the 2022 NX and the old one unless they’re lined up side by side. The newly reshaped spindle grille has a revised texture that looks more modern, and the chin spoiler protrudes further even on non–F Sport models. Some carefully placed bulges on the hood and a few sharp bodyside creases chisel the NX’s appearance; around back, a full-width taillight panel comprises L-shaped brake lights and a thin LED strip connecting them a la Lexus IS. The company’s new wordmark spans the hatch, though we wish it were in Lexus’ old-school font instead of a contemporary new one.

Inside, the new NX is far more revolutionary. Gone is the Darth Vader center stack monolith, replaced by a wide touchscreen display measuring 9.8 inches to start, with an optional 14.0-inch display featuring physical temperature and volume knobs along its bottom edge. Materials throughout the cabin are class-competitive, with soft dash and door panel uppers giving way to hard plastics on the door pockets and lower dash. Notably, leather is not an option; all NX models get NuLuxe upholstery that decently imitates genuine hides while keeping Maisie and Clarabelle munching grass in the meadow.

The reshaped seats are comfortable over long distances, and the rear seat reclines slightly to allow passengers to kick back a bit. A 1.5-inch increase in wheelbase and 0.8-inch length uptick means a reasonably sized interior that feels adequate for four adults to relax and get comfortable, something that can’t be said of competitors like the Mercedes-Benz GLC. The NX has 22.7 cubic feet of cargo space with the rear seats up, expanding to 46.9 with them folded flat. A low liftover height and wide rear hatch aid in loading suitcases, boxes, and the like.

No longer will Lexus force its owners to interact with infotainment via a frustrating trackpad, and the software itself is far improved, with each function occupying an icon on the far left side of the screen: smartphone mirroring, radio, media, navigation, and settings. Notably, there isn’t a home button, and entering an address manually requires a press of the voice recognition button first, which counterintuitively pulls up a screen with an entry field. That’s one too many taps for what should be one of the most common uses for the system.

Lexus says the lack of a home button and at-the-forefront placement of voice commands will help its owners get used to the system. That would be true if the recognition software were totally foolproof, but it occasionally misheard us (and once, it refused to acknowledge us at all). We’re not quite at the point, technologically speaking, where computers can read our minds, so more easily accessible redundant controls would be appreciated.

The infotainment package loses points further by way of its multipurpose steering wheel controls. The button cluster on the left spoke manages phone and audio controls, while the one on the right does driver-assist and cluster adjustments. Both feature a function-swap button that makes operating the system confusing, and using adaptive cruise control or other safety technologies locks out any cluster inputs. The goal is to prevent steering wheel button overload, but this solution is challenging to master. 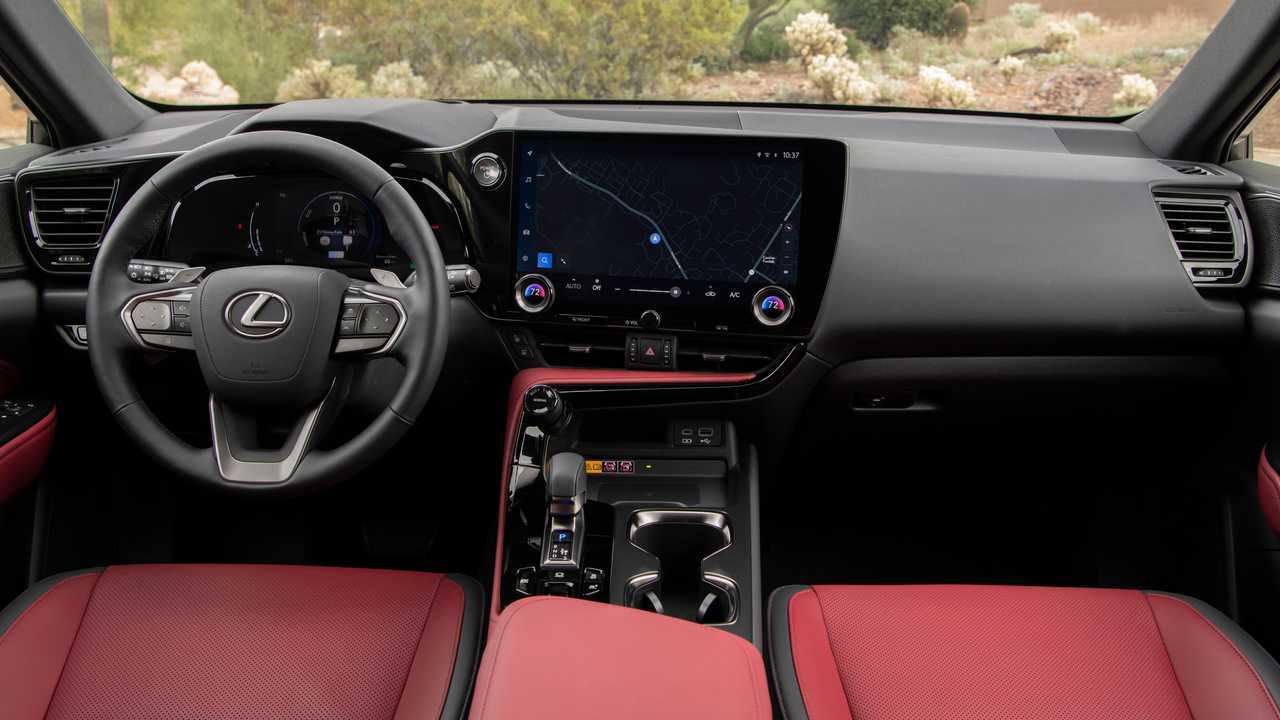 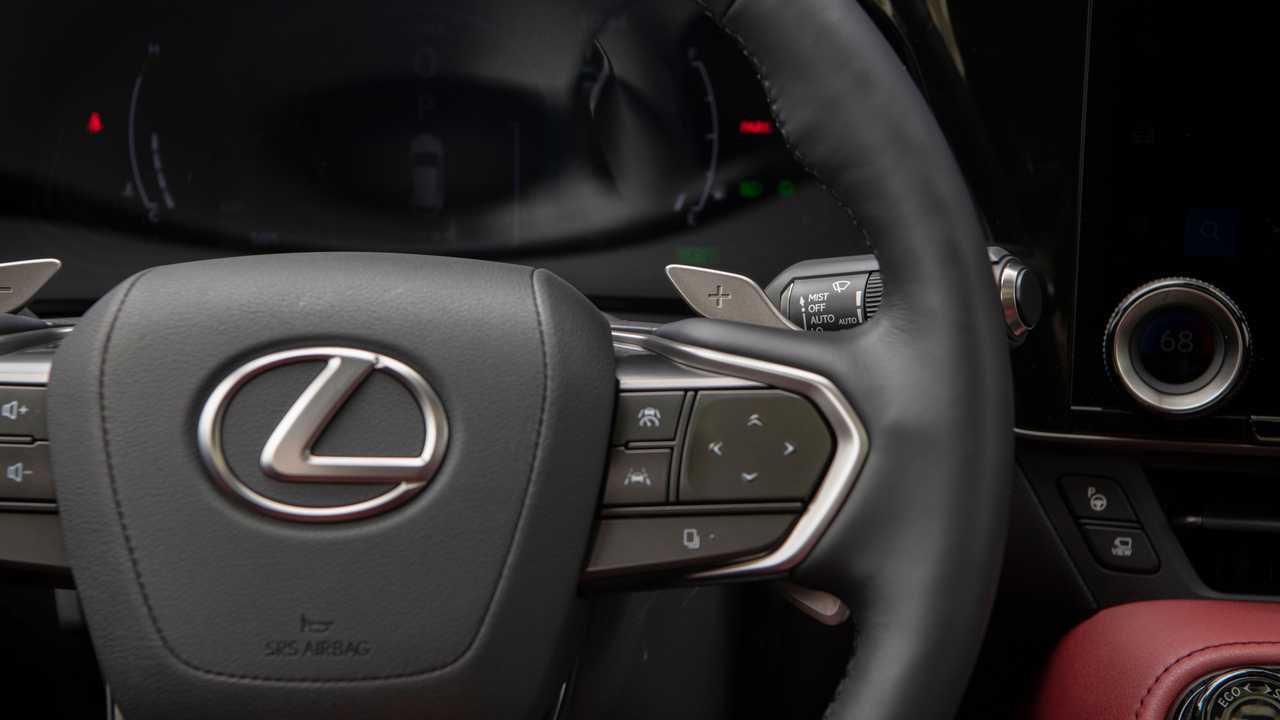 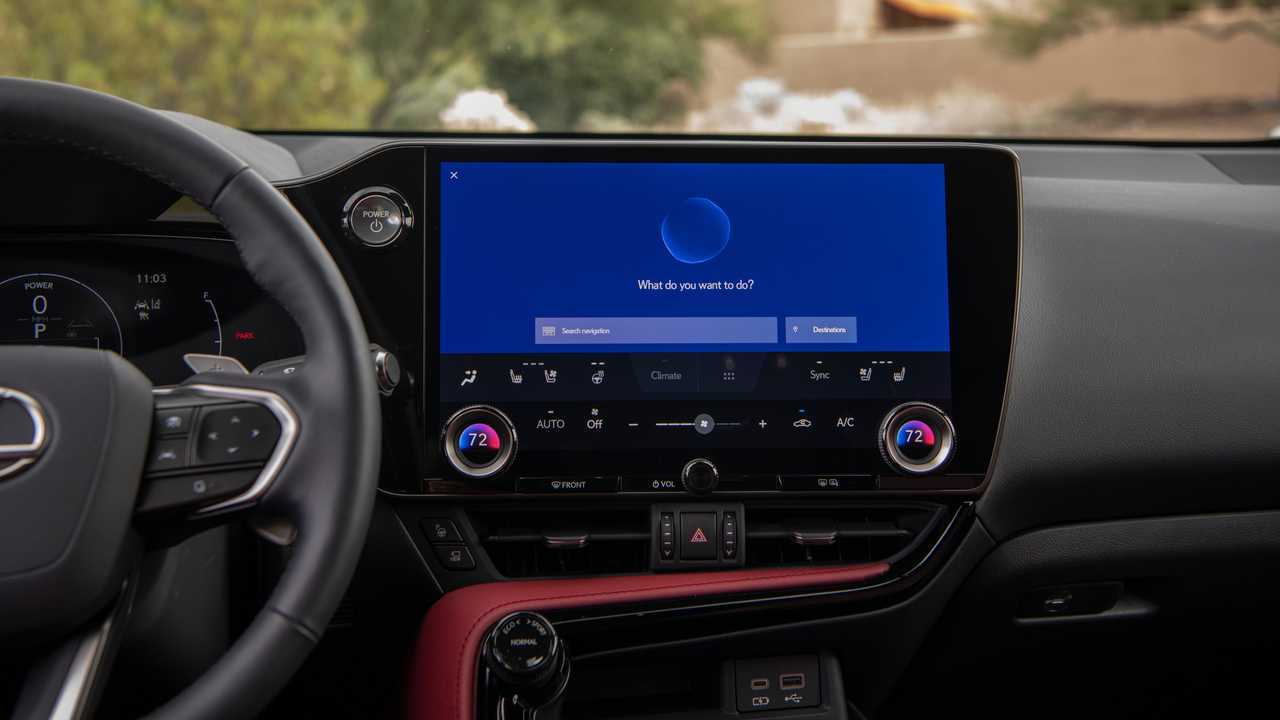 However, the improvement between the old NX and the new one is dramatic otherwise. Graphics for both the center screen and digital cluster are gorgeous, and the infotainment system responds to touch inputs quickly and accurately. Save the lack of a home button and some multi-step processes that could get condensed a bit, the infotainment system is logically laid out and easy to acclimate to, and it’s not as distracting as some competitors’ offerings when driving down the road. 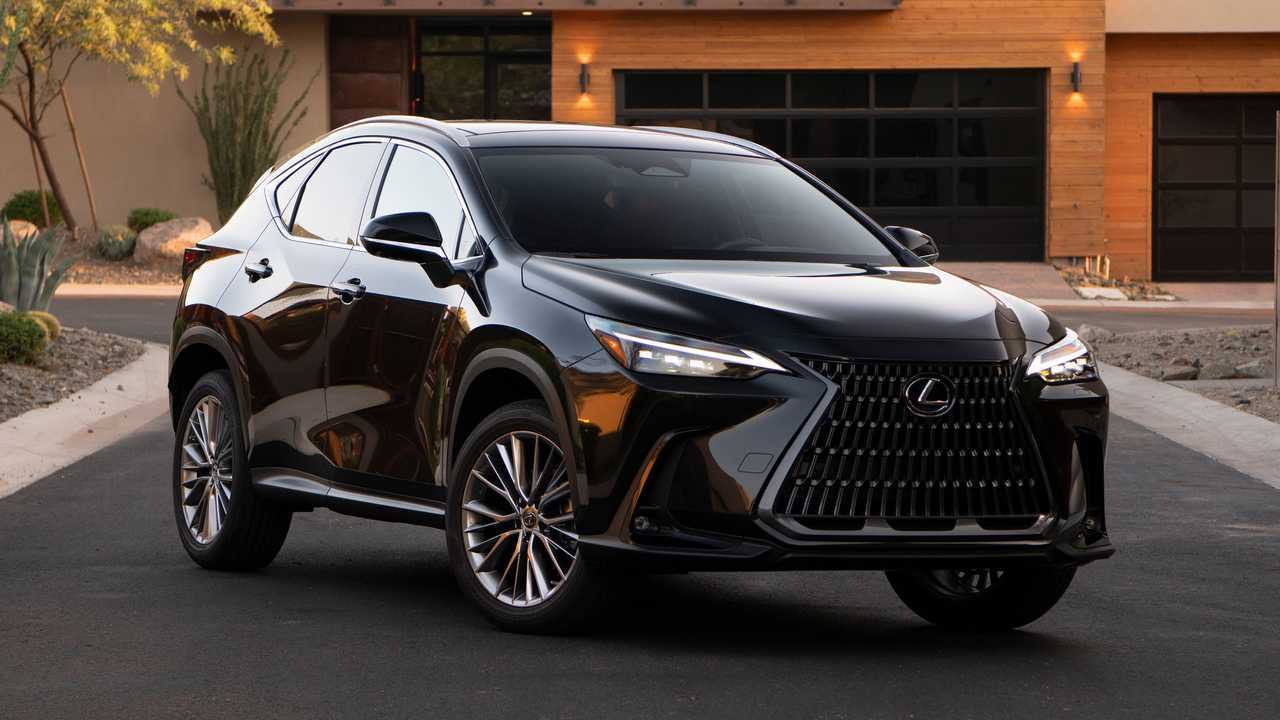 Cranking Up The Volume

The entry-level model (which we didn’t drive) is called the NX 250, and it’s powered by a naturally aspirated 2.5-liter inline-four making 203 horsepower and 184 pound-feet. An eight-speed automatic transmission routes power to the front or all four wheels. Those specs should feel familiar to RAV4 owners. Starting at $37,950 plus $1,075 destination, the NX 250 will appeal to budget buyers, but we think most shoppers will opt for the $42,625 NX 350. A turbocharged 2.4-liter four pushes 275 hp and 314 lb-ft to all four wheels via an eight-speed auto, giving the Lexus far more hustle than its Toyota sibling.

Our first go in the NX was behind the wheel of the turbo with the Luxury and F Sport packages, ringing in at an estimated $55,325. More aggressive front and rear bumpers, body-color wheel arches, dark chrome accents, and black 20-inch wheels made some dynamic visual promises we were skeptical of, given the outgoing NX’s propensity to wallow and understeer through corners. However, introducing the new SUV to its first set of twisties instilled added trust in the platform, which handles undulations and weight transfer far better than its predecessor. 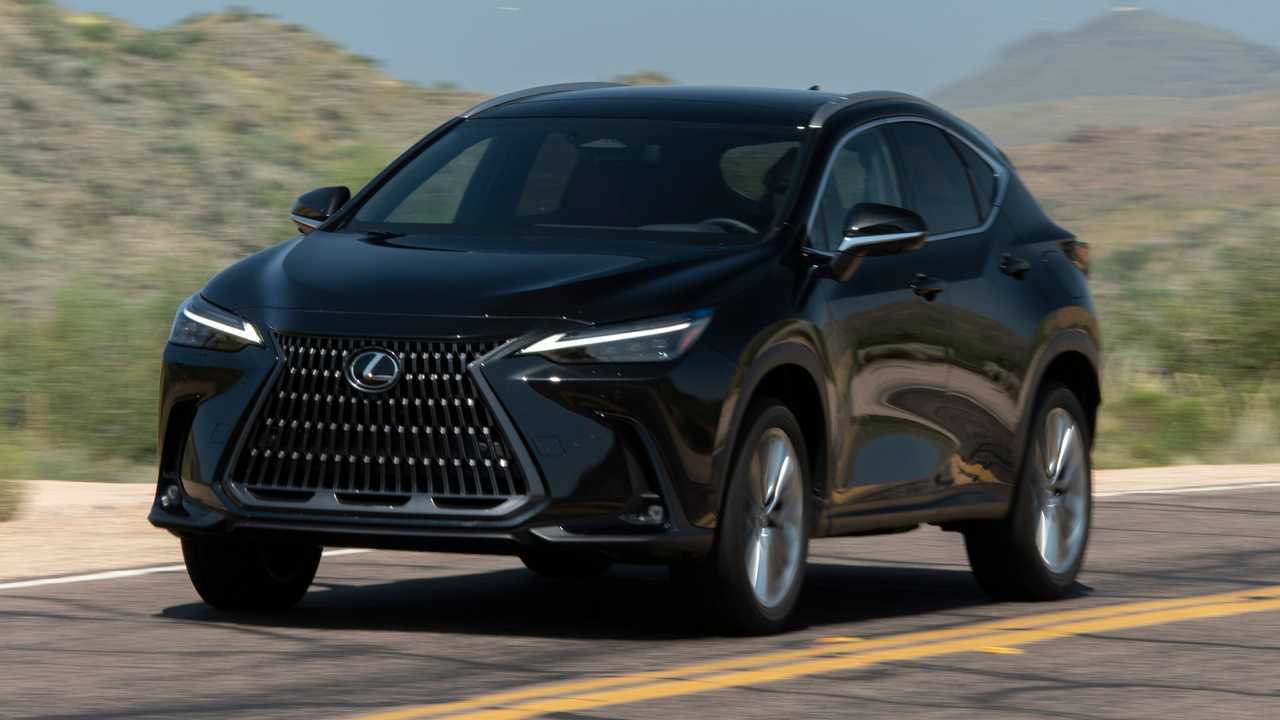 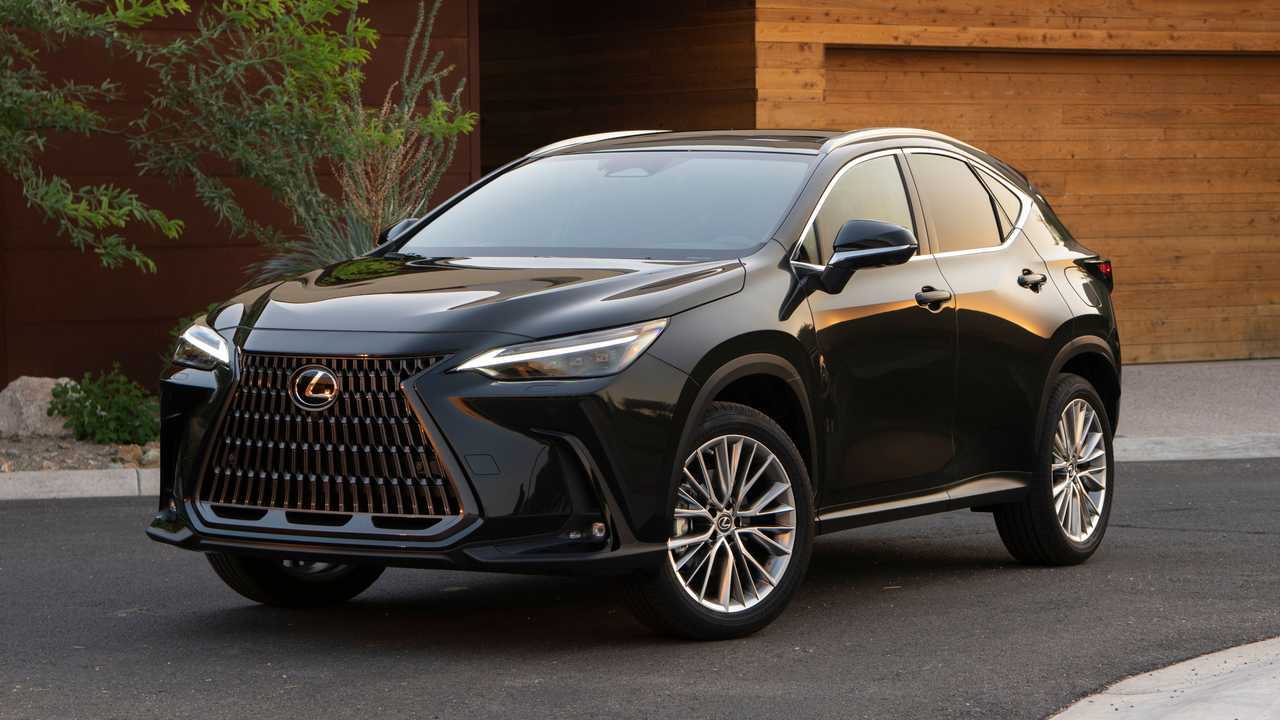 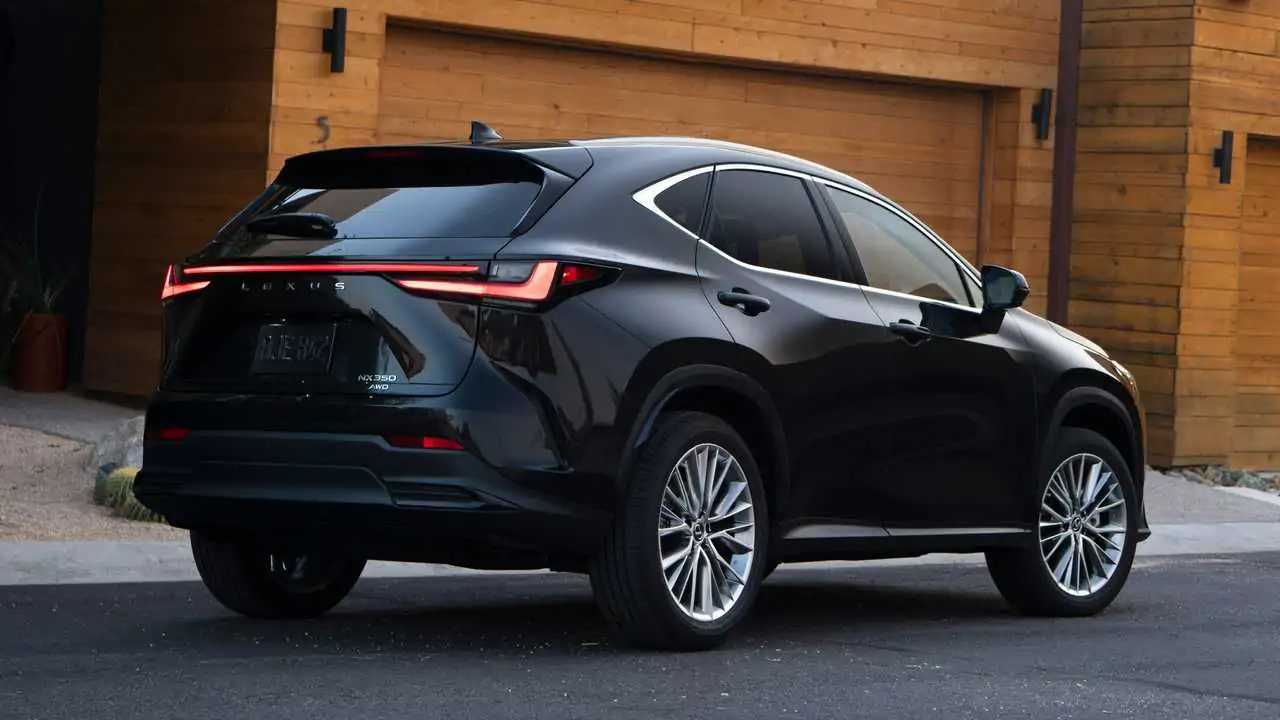 The new NX feels much nimbler and stiffer as well, giving it improved reflexes if it ever does become unsettled (as we felt when cresting a hill to find a surprise hairpin turn waiting on the other side). Though we anticipated more histrionics, the NX simply responded to our braking and turning inputs with only a whiff of electronic stability control intervention before getting on its merry way again. In the old SUV, the ESC would have cut power like a scolding schoolmarm with a ruler, but now it steps in and out invisibly.

The adaptive variable suspension that comes on F Sport models also does a good job of tuning the NX for specific tasks. Set to its most comfortable mode, the ride is firm and controlled, but never unyielding. In fact, we preferred it over broken, twisty pavement to the stiffer Sport and Sport Plus settings, which sometimes left our teeth chattering over big bumps. On smooth roads, however, Sport boasts crisper turn-in and seems to roll less, with Sport Plus improving further. Typical of any front-wheel-drive–biased crossover, there’s not much feel to the steering, with the drive modes adding heft, but not much communication.

The turbocharged 2.4-liter inline-four is a reasonably smooth operator, and it’s up a whopping 40 hp and 59 lb-ft over the 2.0-liter turbo from the outgoing NX 300. The new eight-speed automatic transmission is also improved compared to the old six-speed, offering downshifts more readily during sporty driving. The F Sport’s standard paddle shifters don’t add much to the driving experience, handy when descending a long grade but mostly redundant elsewhere thanks to the gearbox’s adequate logic. Once boiled up, the 350 sprints to 60 miles per hour in about 6.6 seconds, though it feels a bit more athletic than that. 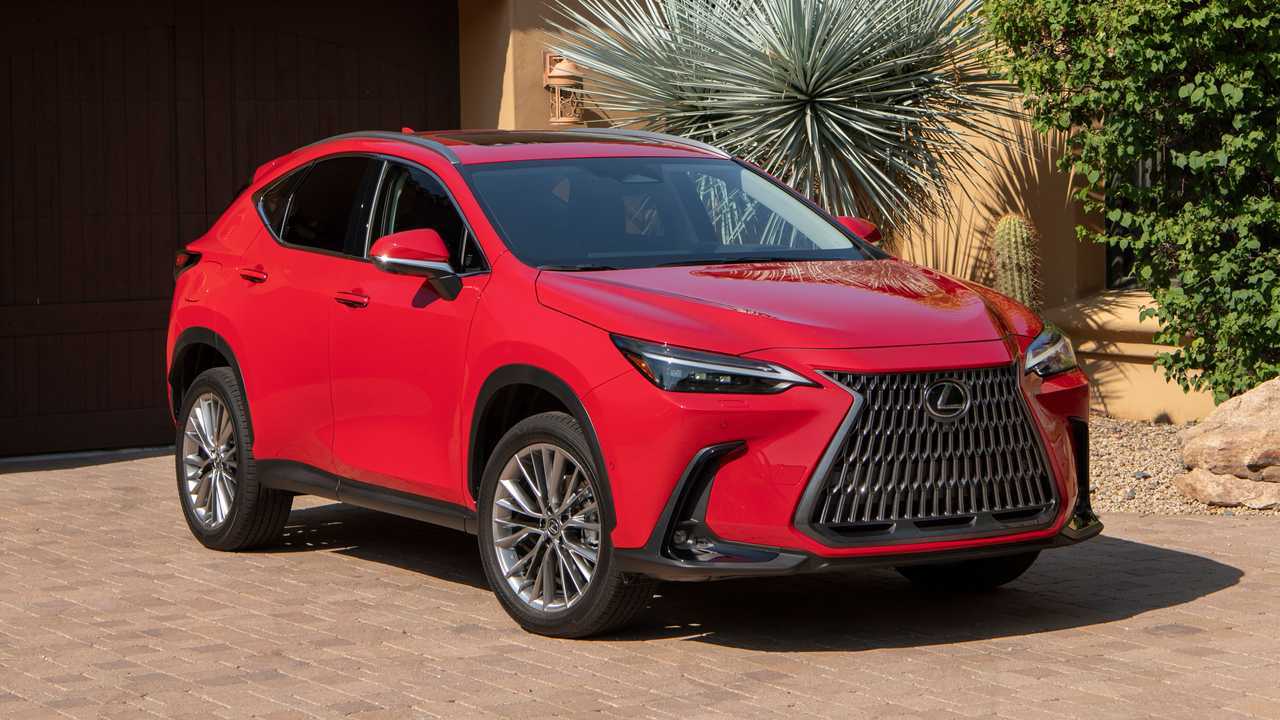 If there’s a dynamic failing to the NX 350, it comes in the form of minor turbo lag. The Lexus SUV requires its driver to wait just a moment for full power, which means passing and merging need to be considered slightly in advance. However, the $56,635 NX 450h+ (the first Lexus plug-in hybrid) has no such problems. There’s a husky 302 hp on tap, combined from a naturally aspirated 2.5-liter four-cylinder and an electric motor on each axle. Total torque is unknown, but the mechanically similar RAV4 Prime offers 199 lb-ft and 89 lb-ft, respectively, from the front and rear EV motors, plus 165 lb-ft from the gas engine.

You feel every bit of that grunt from behind the wheel. Light and moderate throttle inputs keep the engine deactivated, with instantaneous electric torque helping the NX feel spry off the line. Dip into the accelerator further and the gas engine wakes up, shuffling power through the motors and a continuously variable transmission. Handoff between gas and electric power is seamless, and the engine idle stop is nearly imperceptible. Thanks to a comprehensive digital gauge cluster that shows power flow, balancing electric-only motivation and efficient brake regeneration is entertaining in and of itself, but the 450h+ is also fun when caned hard. 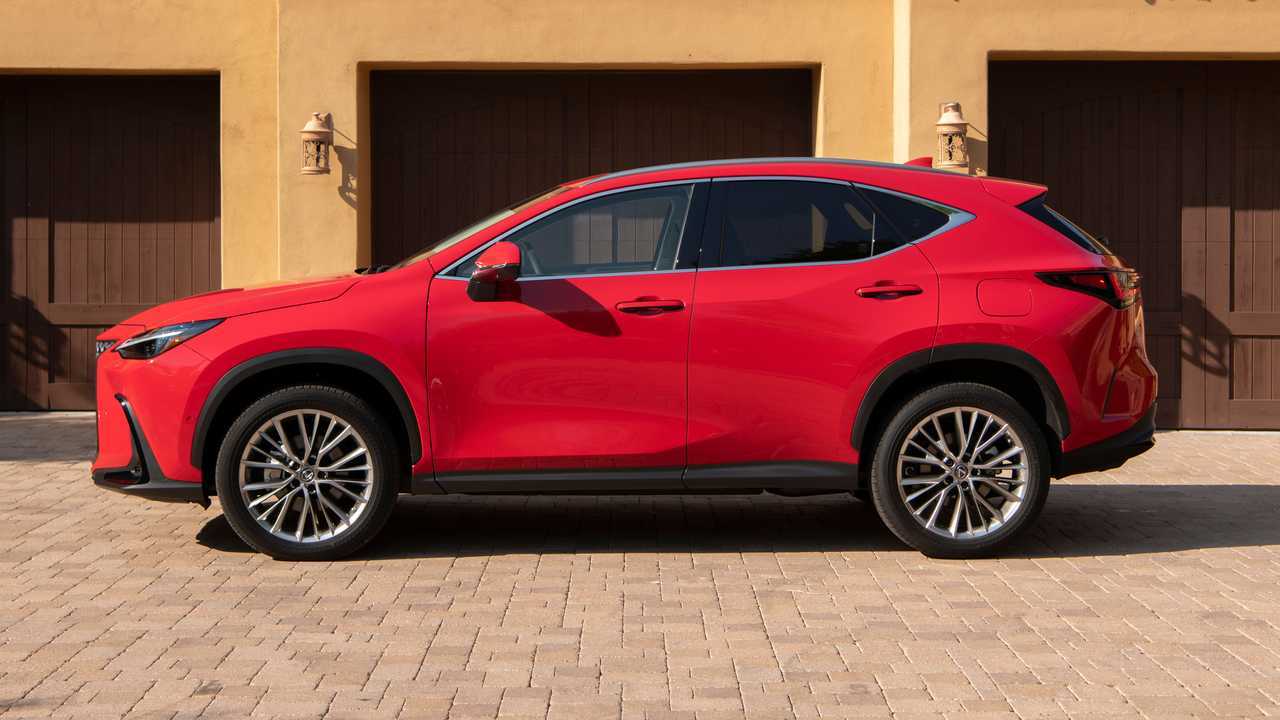 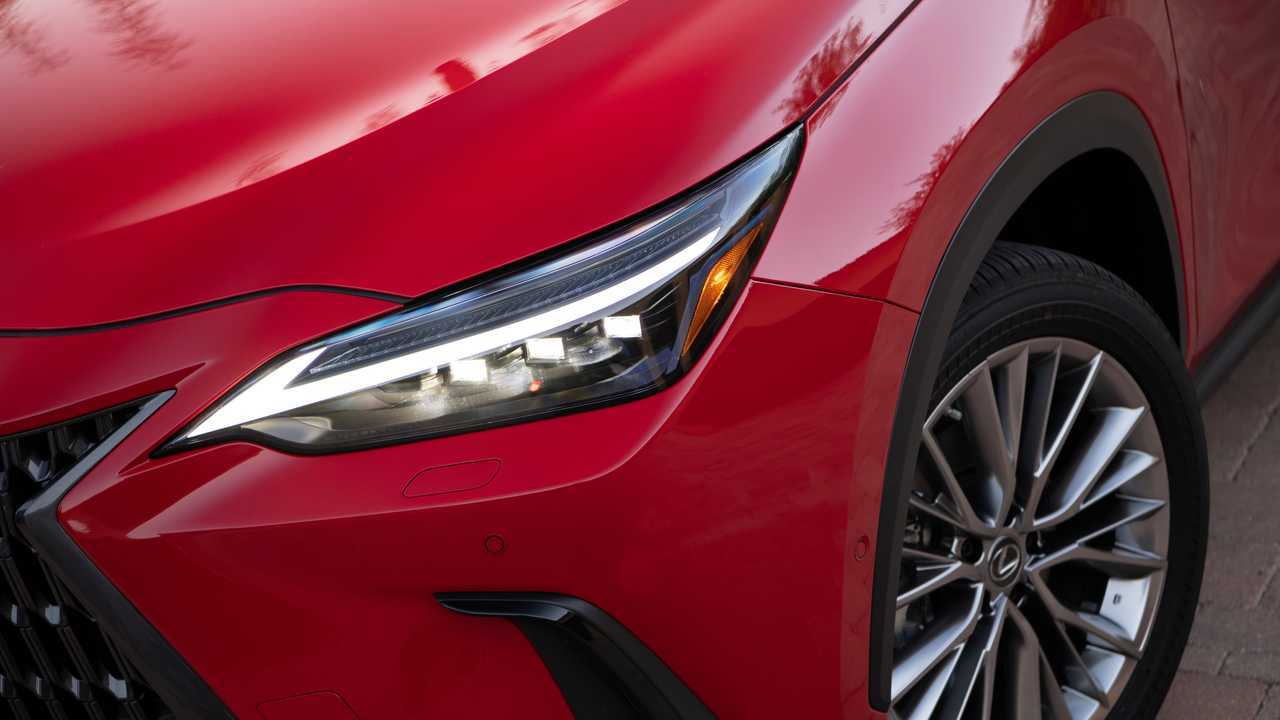 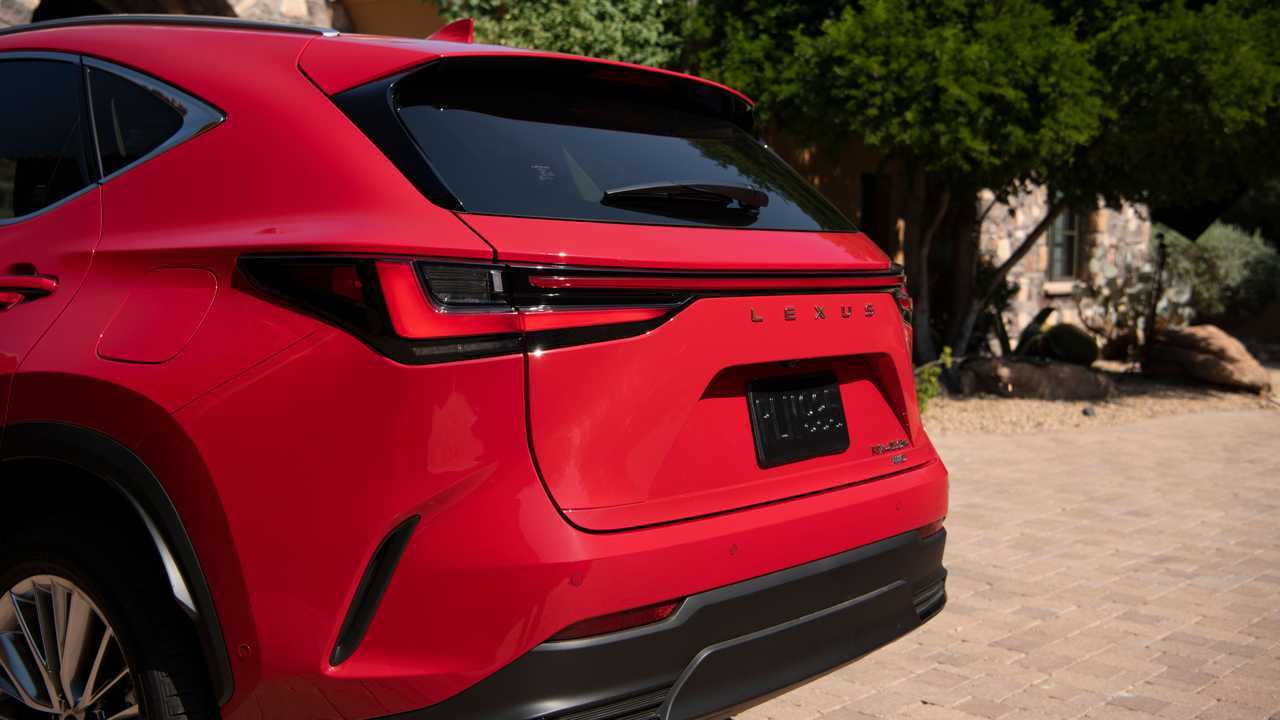 Like the NX 350, the plug-in has a stiff and responsive chassis, limited body roll, and reasonably accurate steering that makes brisk work of a canyon road. At 4,475 pounds, the NX 450h+ is 430 pounds heavier than the turbo, but much of that weight is located in a low-mounted battery pack, helping keep the center of gravity amenable to stability. What’s more, we actually appreciated the non–F Sport suspension’s cushiness, especially since it didn’t seem to come at any dynamic penalty.

There is one drawback. The CVT is prone to some rubber-banding with no simulated shifts – on hard acceleration, revs rise high and stay there, although the electric motors work to keep power delivery linear. Other than that, the first plug-in Lexus is an impressive freshman effort. With an estimated EV range of 36 miles, a combined fuel economy rating of 37 miles per gallon, and a 0-60 time of 6 seconds flat, our $60,690 NX 450h+ tester is efficient, spacious, comfortable, and just sporty enough to keep us happy. 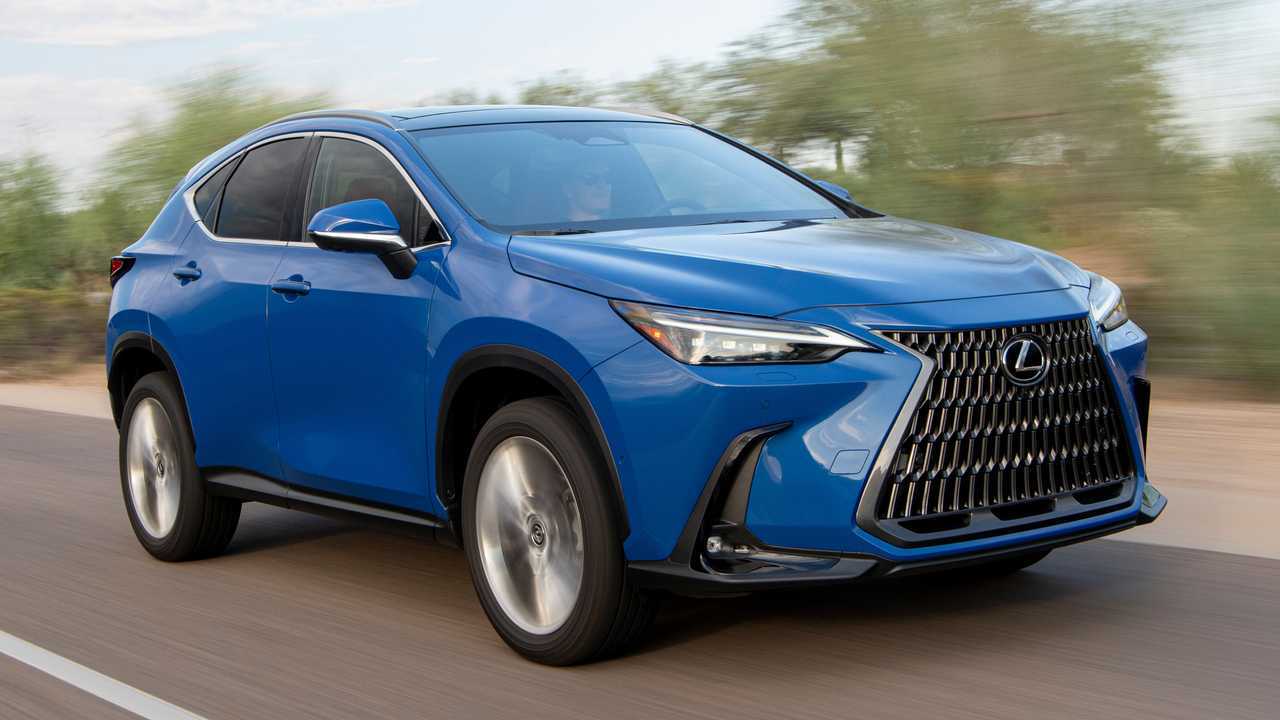 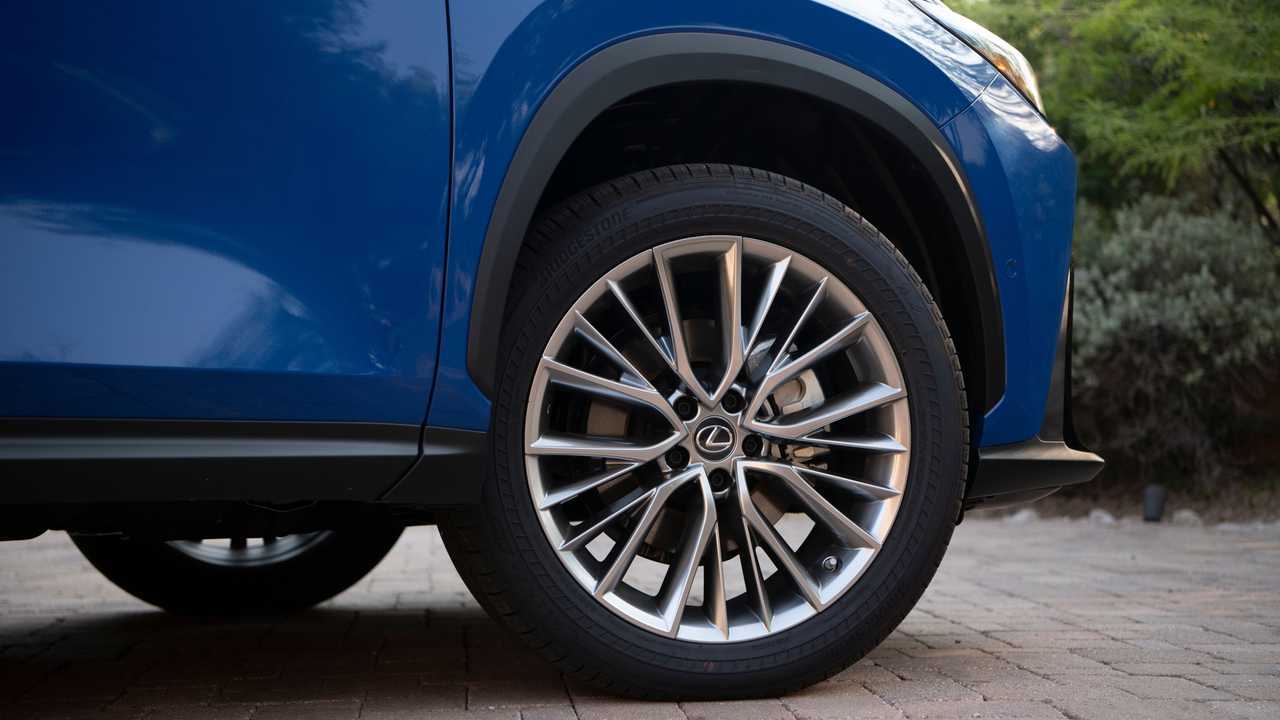 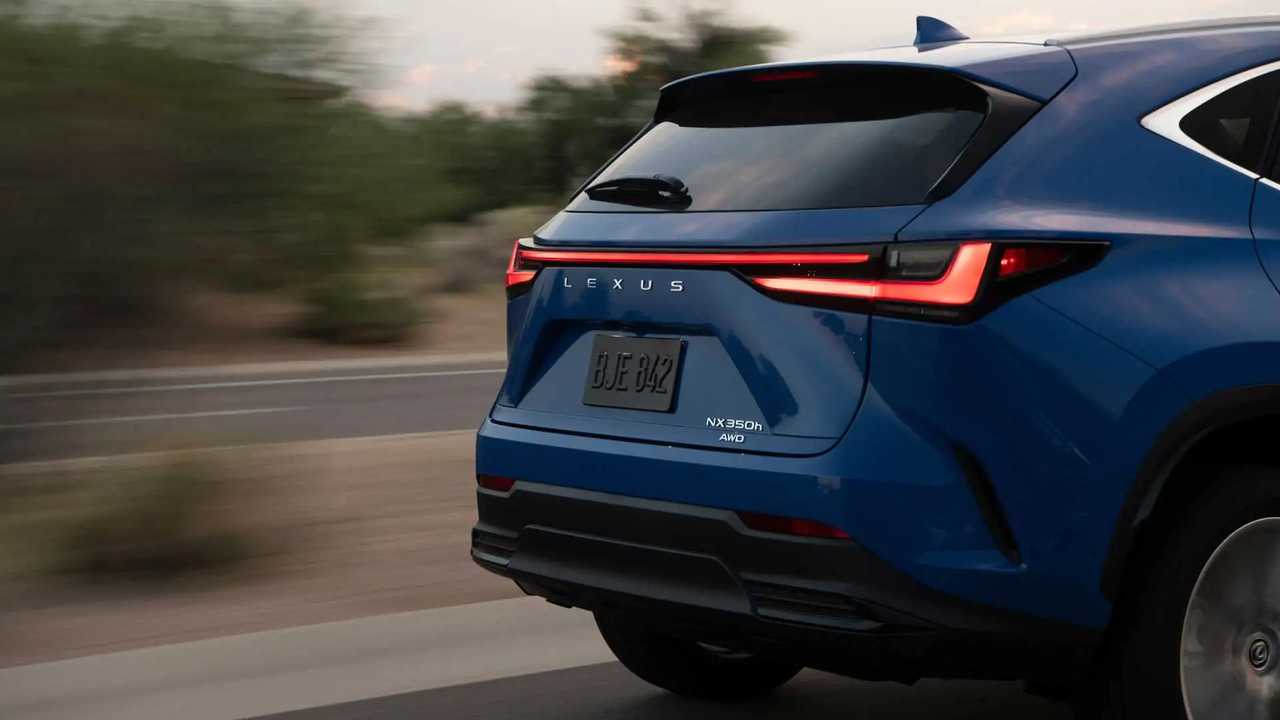 Parsimonious For The Rest Of Us

In the luxury segment, Lexus buyers are among the most amenable to traditional hybrids, and the automaker won’t leave them out in the cold. Using a 2.5-liter inline-four that’s similar to the one in the plug-in, the $42,125 NX 350h also boasts an electric motor on each axle, combining to a total of 239 hp. That’s enough to keep most average commuters happy, especially with a fair amount of torque on tap. The hybrid suffers from the same droning, full-throttle engine note as the plug-in, but the thrashiness is limited to sound only, with no unpleasant vibrations making their way to the cabin.

Sporty the 350h is not, so Lexus won’t even offer it with the F Sport package. As such, it’s a comfortable and efficient way to get from A to B, with dynamics that stray toward safety and tranquility instead of excitement. Lexus claims a 0-60 time of 7.2 seconds and a combined fuel economy rating of 39 mpg – better than the heavier plug-in, so if that’s the one you want, be sure to keep it fully charged as much as possible. Those not looking for a thrilling driving experience will find much to love in the NX 350h.

The Cost Of Luxury

But the Lexus SUV still seems like a decent value, with nicer interior materials than a comparably priced Mercedes-Benz GLC and more space than the fastback Genesis GV70. Newly enjoyable to drive on a twisty road, the NX also has greater powertrain variety than before, with each engine offering a decent balance of tractability, efficiency, and power. It’s an undeniably massive improvement that helps the 2022 NX shake off the passionless image of its predecessor, replaced with some newfound exuberance we’ve come to expect of modern Lexus products.

Following a trend set by a number of states in the U.S., New York state has passed a law that {...}

After the last price increase on Oct 1, petrol is now at an all-time high in the country. The next price revision {...}

According to our sources and reports, KIA Lucky Motors has increased the prices of KIA Sportage and KIA Picanto. Although {...}