I’m not supposed to love this car. The 2021 Ford Mustang Mach-E is, to a dyed-in-the-wool Mustang fan like me, evil incarnate. And yet, cruising towards the historic Ford Model T factory on infamous Woodward Avenue in Detroit, I find I’m enjoying myself. A lot. The devil on my shoulder has something to do with that.

By now you know all about the Mach-E. This sharp-dressed electric crossover has garnered near-universal praise among auto journalists, balanced by near-universal hate from Mustang enthusiasts. That presents a problem for me, because I’m both an auto journalist and a Mustang enthusiast. I’ve owned three Mustangs in the last 10 years, including the red 1995 GT convertible (below left) currently sitting in my garage. I’ve joined clubs and been to numerous Mustang-only events over the years, wearing Mustang shirts and hats along the way. I even have framed pictures of my Mustangs hanging in the living room. Yeah, I’m that guy. 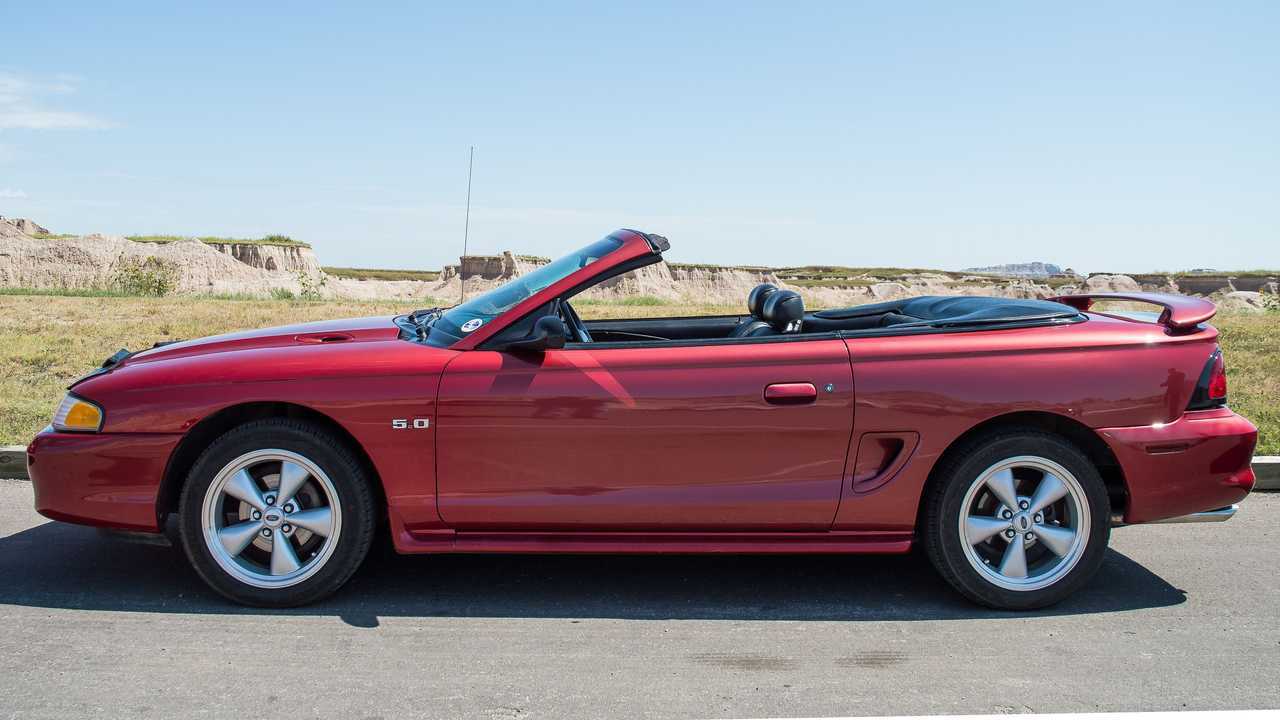 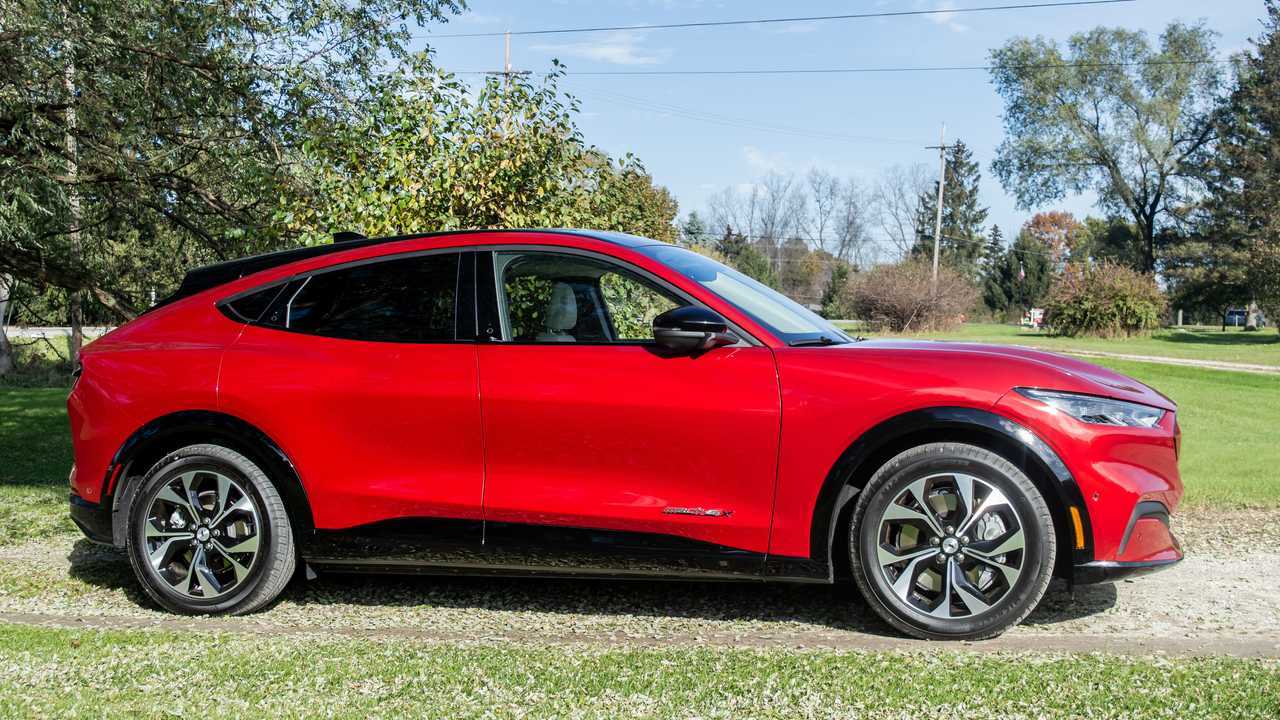 I’ve also driven every single pony car generation with just about every engine you can imagine, from an emissions-choked 1977 Mustang II to a 700-horsepower Shelby Super Snake. You could say I know a thing or two about these cars, but I’ve never driven a Mustang like the Mach-E. Its semi-spacious interior with four doors, all-wheel drive, and silent operation is indeed a very different experience, but after spending two days and 200 miles tackling twisty roads and crowded highways of southeast Michigan, this Ford dude is reconsidering his definition of a Mustang.

The Devil On Your Shoulder

Much has been said about the tangible definition of Mustang, and I’m not going to rehash that. I’ll simply point out these cars have lived as coupes, fastbacks, hatchbacks, convertibles, and two-door sedans with a wide array of powertrains, so why not a five-door dual-motor electric crossover? Instead, I’m focused on two intangible sensations often found in smallish, high-performance cars but are prominent to Mustang enthusiasts. And the one I’m interested in most is something I call The Devil On Your Shoulder Effect.

In short, it’s the voice in the back of your head that pokes and prods and provokes until you revert to a 16-year old kid in dad’s car. C’mon, floor it. C’mon, get sideways at the next corner. C’mon, do a burnout. Everyone’s watching. Mustang folks are especially susceptible to this, and if you don’t believe me, do a Google search for Mustangs leaving Cars & Coffee.

And the freaking devil was in there in the Mach-E, begging me to be bad.

Even without a V8 soundtrack, and with all four wheels putting power to the ground, that damn devil was constantly goading me to misbehave in the Mach-E. C’mon, stab the throttle. C’mon, pass that Camaro. C’mon, do some AWD donuts. Everyone’s watching. For the record, I didn’t succumb to donuts, but holy potatoes did I want to. As for the rest, I’m not the least bit ashamed to say the devil got his way. That’s what 428 pound-feet of instant electric torque will do for you, and this particular Mach-E wasn’t even the high-output GT. 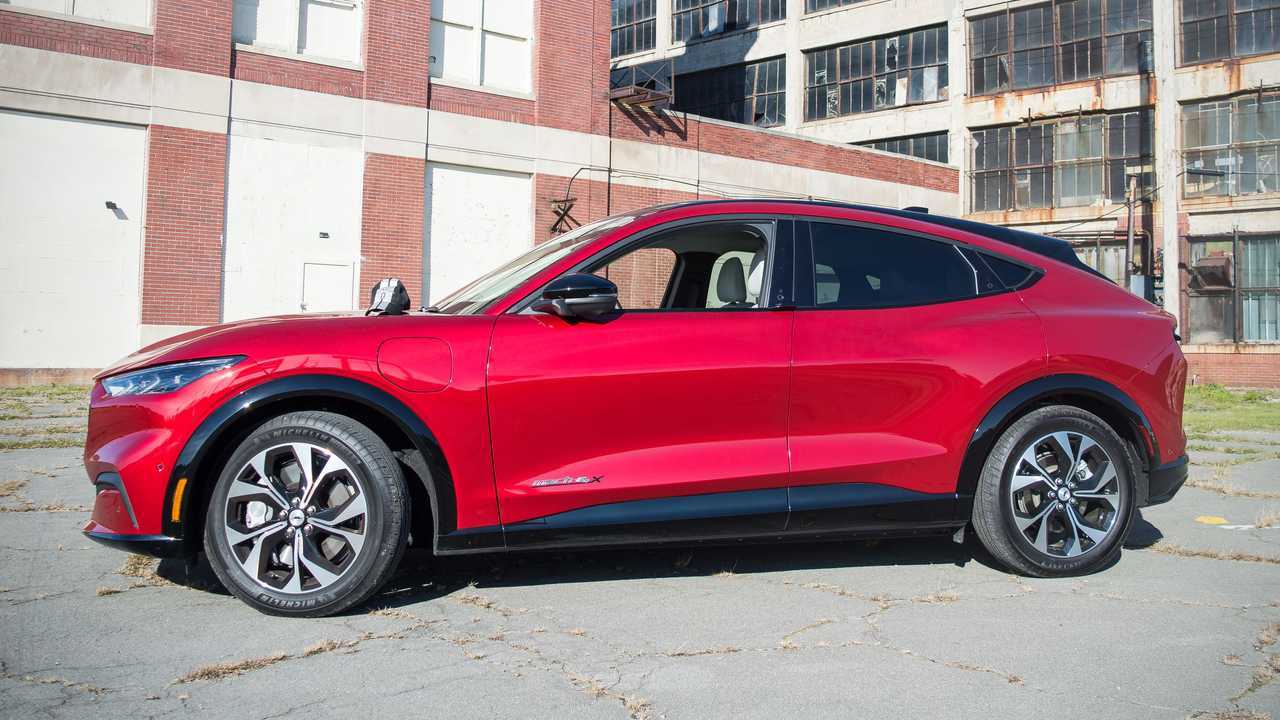 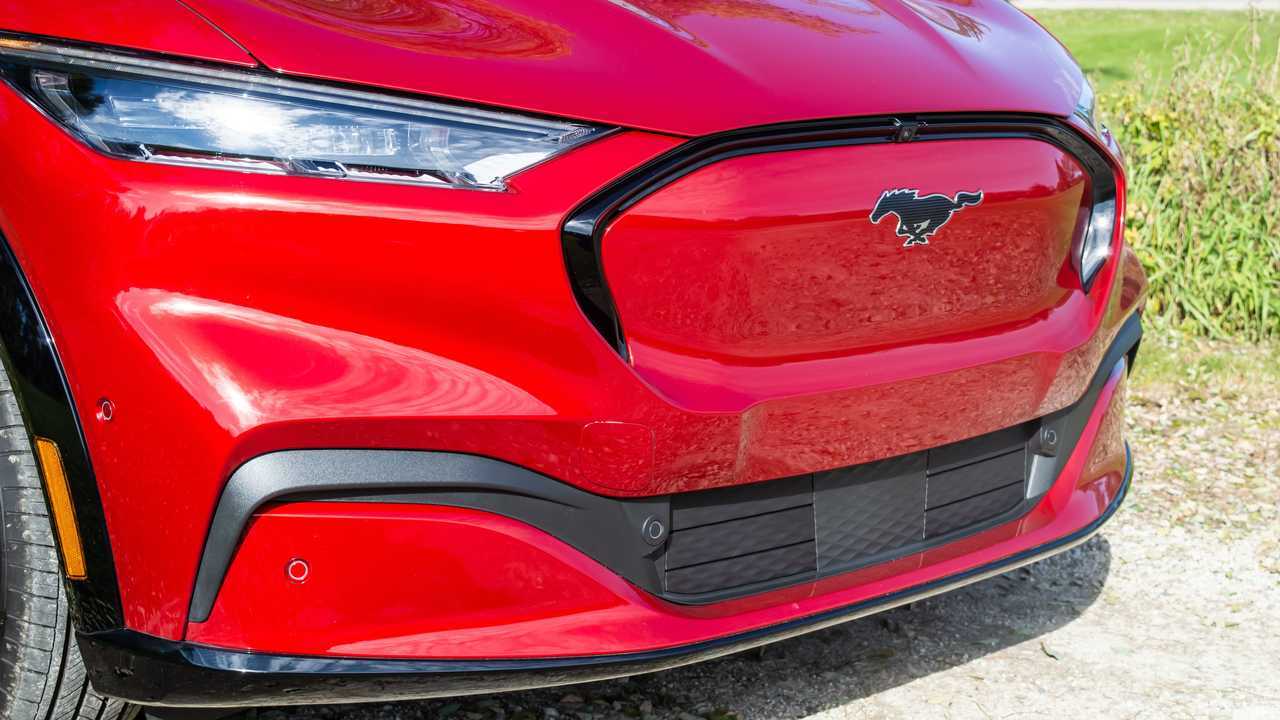 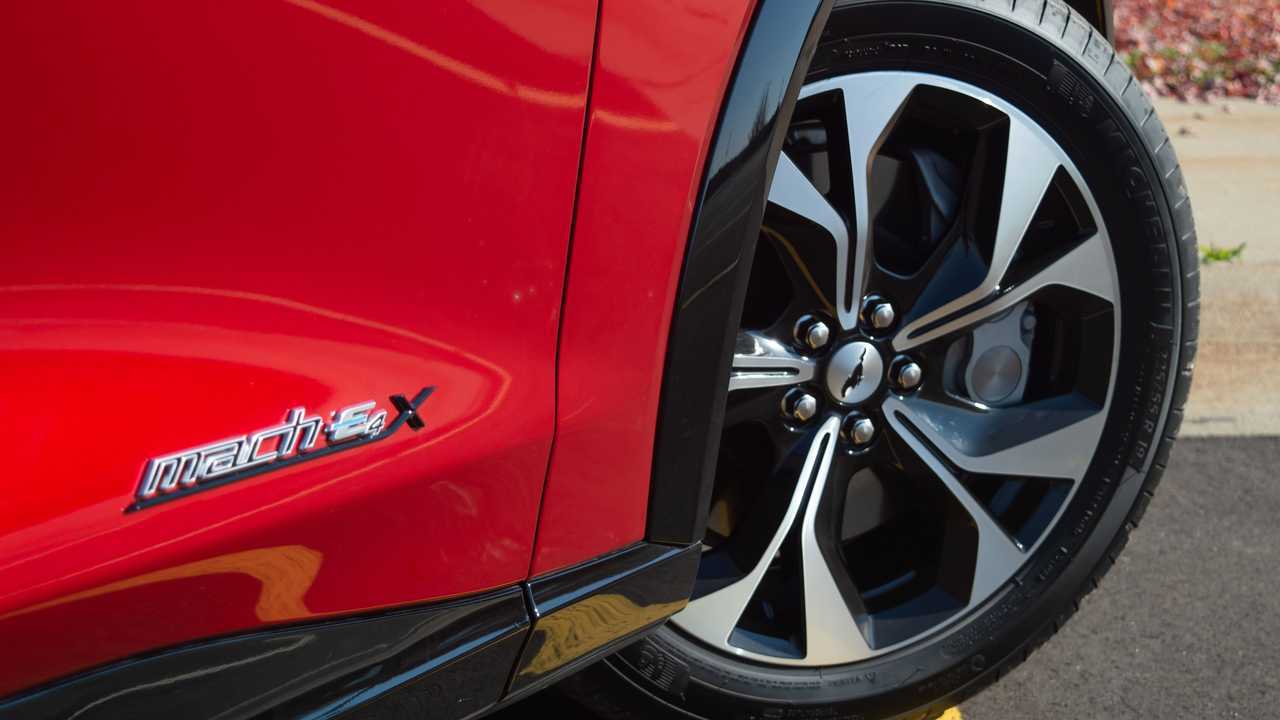 Electric torque feels altogether different than driving a bonkers V8, and by different, I mean better. A combustion engine still needs a moment for fuel and air to mix, another moment to ignite, another to reach peak power, and then the peak is gone until the next gear comes around. But the Mach-E has a toggle switch of thrust that surges without waiting, and continues without end. This is my first EV experience and I can’t fathom how any person who loves horsepower would find this soulless or boring. V8s sound great, but if you’re that hung up on noise, you have my sympathy because you’re missing a whole new world of thrilling performance.

Size matters, but not in the way you’re expecting

I mentioned two intangible sensations as my criteria for this special evaluation, and the second is size. I’m not talking about the Mach-E’s physical size, which is actually shorter, narrower, and just a bit taller than its traditional counterpart. Every Mustang I’ve driven felt like it embraced occupants as an integral part of the car, burrowed in the middle with a long hood in front and a disappearing deck at the rear. Even the big ol’ 1973 ‘Stang at nearly 16 feet long has this feeling, and from the outside, the Mach-E looks the part. 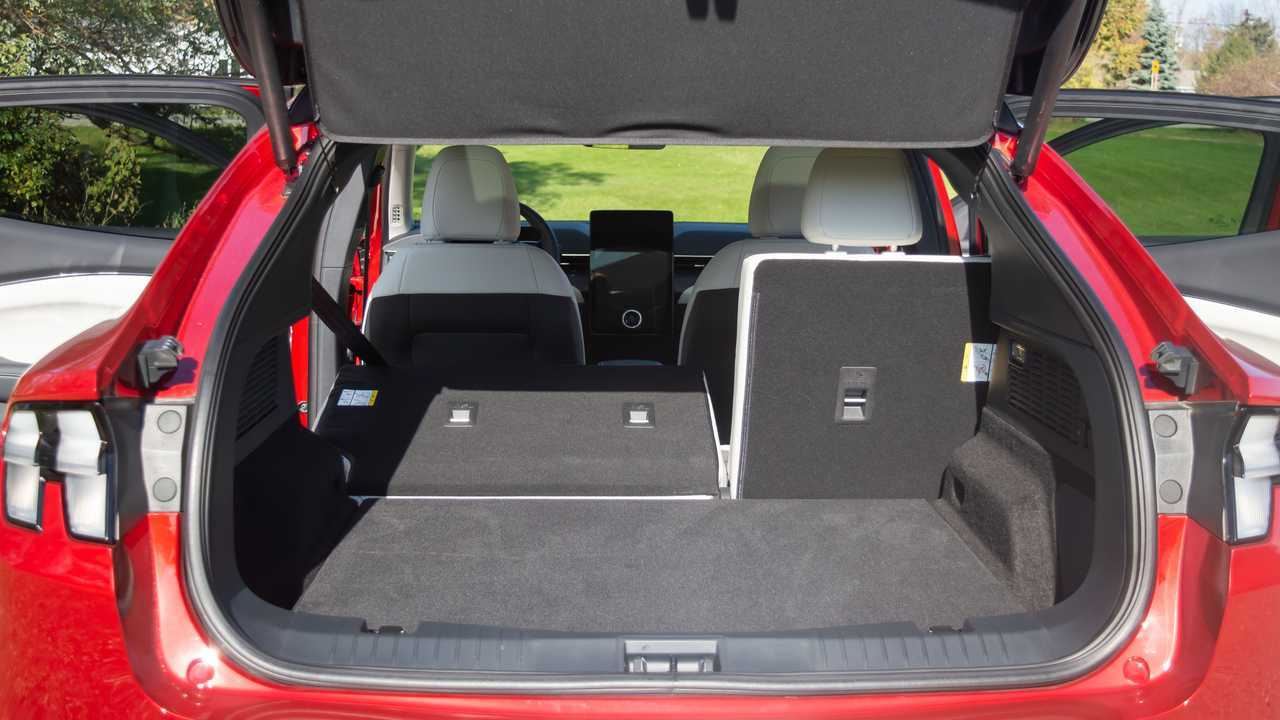 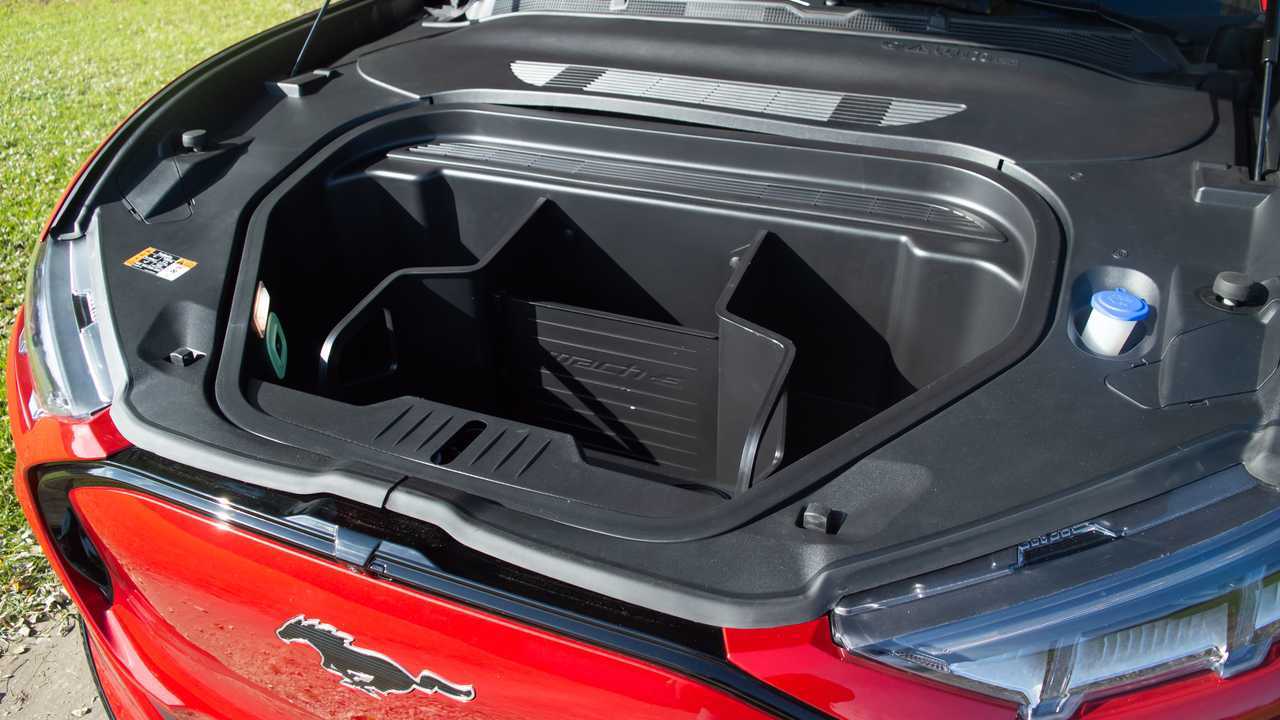 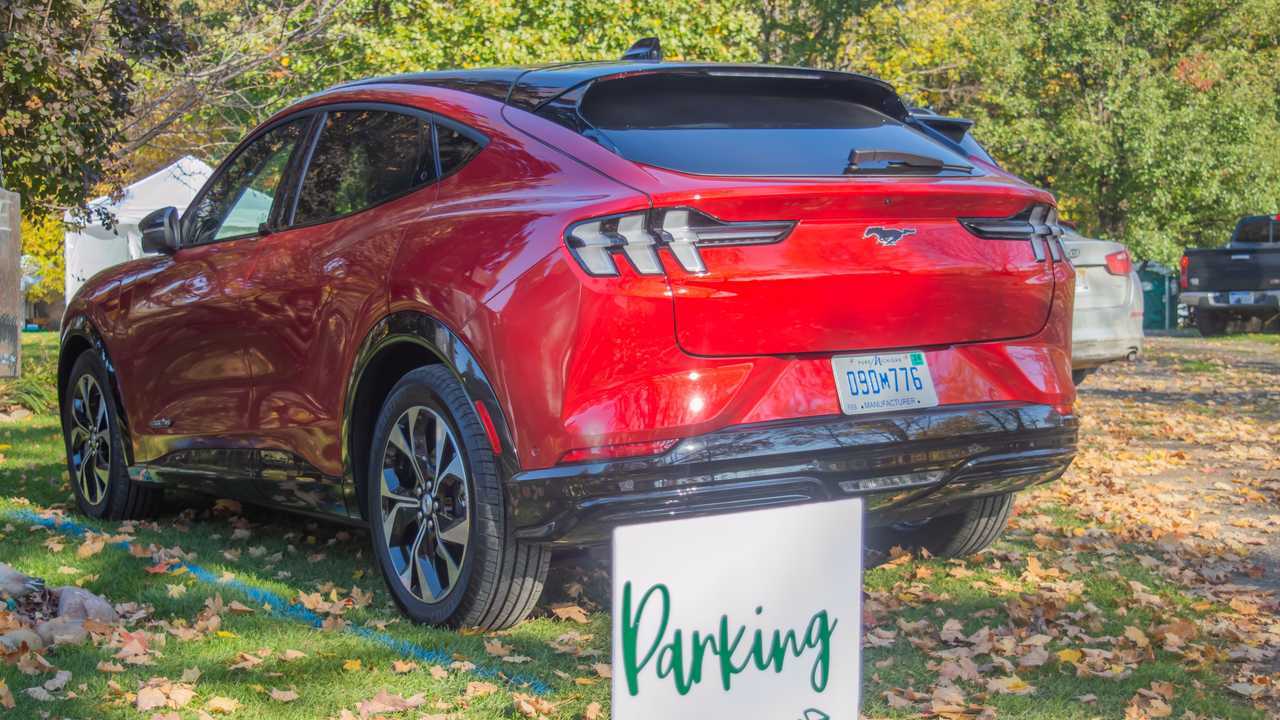 Without a huge engine up front, most electric vehicles get a short, boring front clip. But sitting behind the Mach-E’s digital dash, there’s a surprising expanse of red aluminum stretching forward that offers legit Mustang familiarity. Looking in the rearview, the hatchback design delivers an appropriately short deck, too. The seats are supportive without being overbearing, the cabin is comfortably cozy without being intrusive or expansive, and though the digital screens make the dash look empty, that all changes when you push the start button. 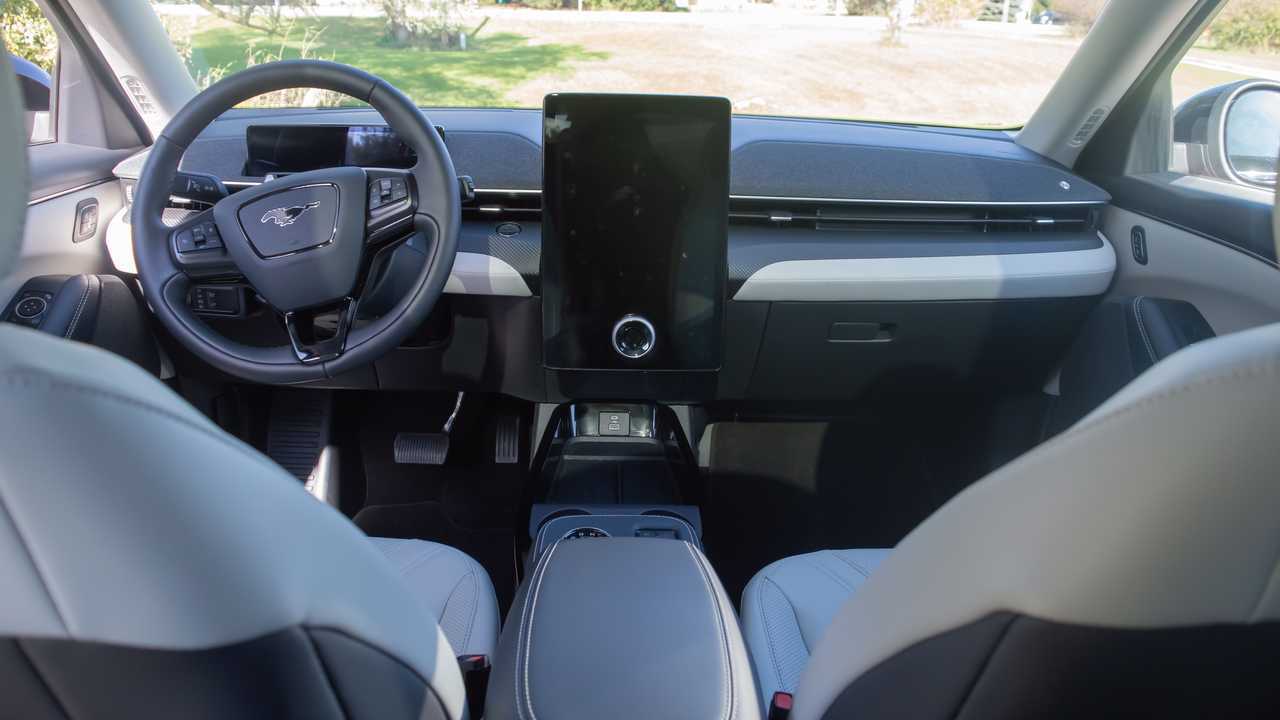 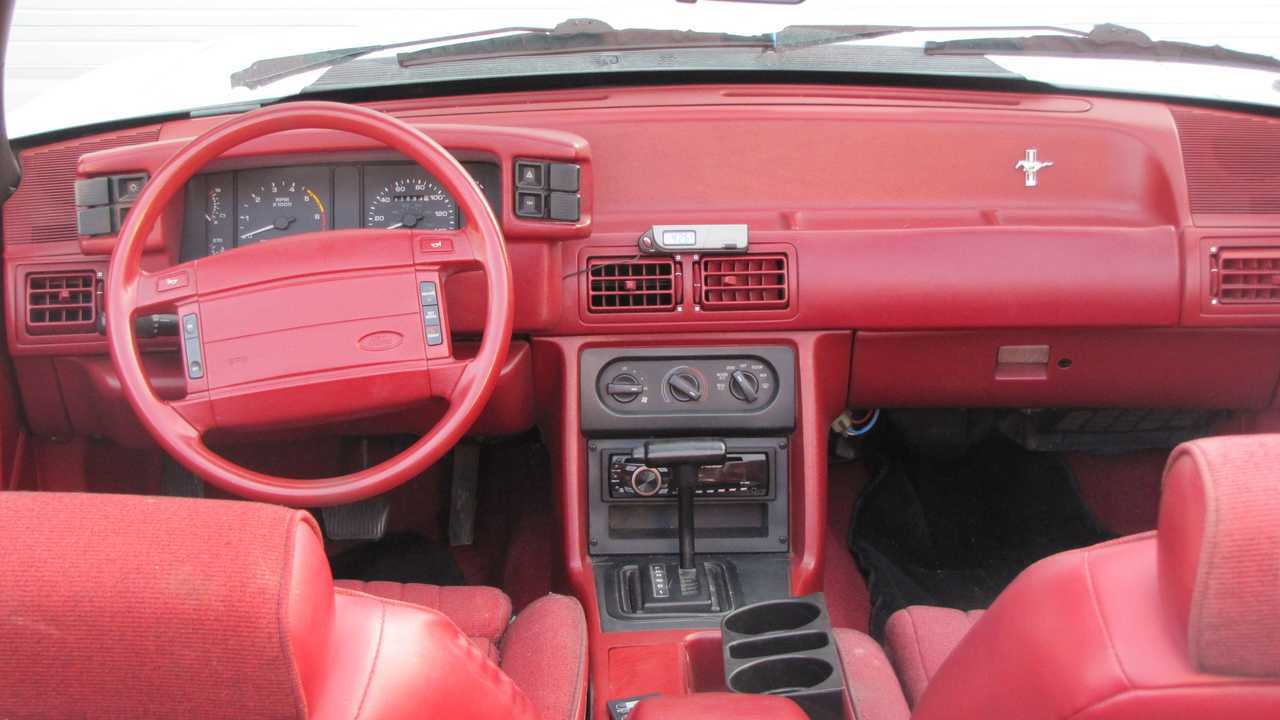 However, I’m immediately aware that I’m sitting higher than normal, and not because of the Mach-E’s ground clearance. In fact, at 5.7 inches it’s actually a touch lower than my SN95 convertible on stock springs. It’s the seating position in the cabin that’s higher – an ode to its crossover nature – which makes me feel like I’m slightly above the car instead of inside it. Nor do I feel like I’m sitting in the middle. Mustangs have back seats, but this one is actually functional for adults (smallish adults anyway) and then there’s a decent amount of storage behind it.

As a result, I don’t feel like I’m an integral part of the Mach-E, equally surrounded on all sides by a badass car. Instead, I sit too high up and too far forwards, which makes the Mach-E feel bigger than it is. For a practical vehicle, such an attribute is a good thing. For a car claiming to be a Mustang, it’s a problem. Bummer.

I was really hoping the Mach-E would pass both my tests because honestly, I don’t mind a four-door, all-wheel-drive pony that’s fun to drive. Actually, you can get rear-wheel drive if you want, and as for powertrains, the vast majority of the 10 million Mustangs built since 1964 didn’t come with V8s. Electric motors are just another rung in the ladder, so really, we’re left with the four-door body as the only sticking point in this controversy. That is, from a tangible standpoint, anyway. My intangible road test only scored 50 percent, and as much fun as that instant torque is, speed and power aren’t the only defining factors here.

This isn’t a Mustang, but it could be

Full disclosure: I didn’t feel nearly as special cruising Woodward in the Mach-E as I did in my 2003 SVT Cobra convertible back in the day. My wife came to the same conclusion from her vantage point in the passenger seat, and I don’t see any hardcore Mustang enthusiast ever accepting this car no matter how good it is. But at risk of losing some friends, the hardcore crew doesn’t matter here. The Mach-E will garner attention, both for its looks and its performance. Owners will still grin with every pivot of the accelerator. And it will still sell like hotcakes. No amount of disdain from purists will change that.

Ford didn’t build the Mach-E for purists, and they’ll have nothing to do with it. But it will appeal to milder enthusiasts like me.

Rolling towards the old Ford Model T factory on a sunny November Sunday, my Rapid Red test vehicle garnered plenty of attention on Woodward. Whether Mustang people admit it or not, they love attention so that’s another win in my book, and I still had enough power to satisfy the devil at stoplights. Furthermore, I had enough electricity to partake in 200 miles of motoring tomfoolery, and when the charge was low, I refilled the batteries using public charging stations for a whopping $1.75. I really enjoyed not having a $60 fuel stop, but not as much as I enjoyed my overall time behind the wheel. 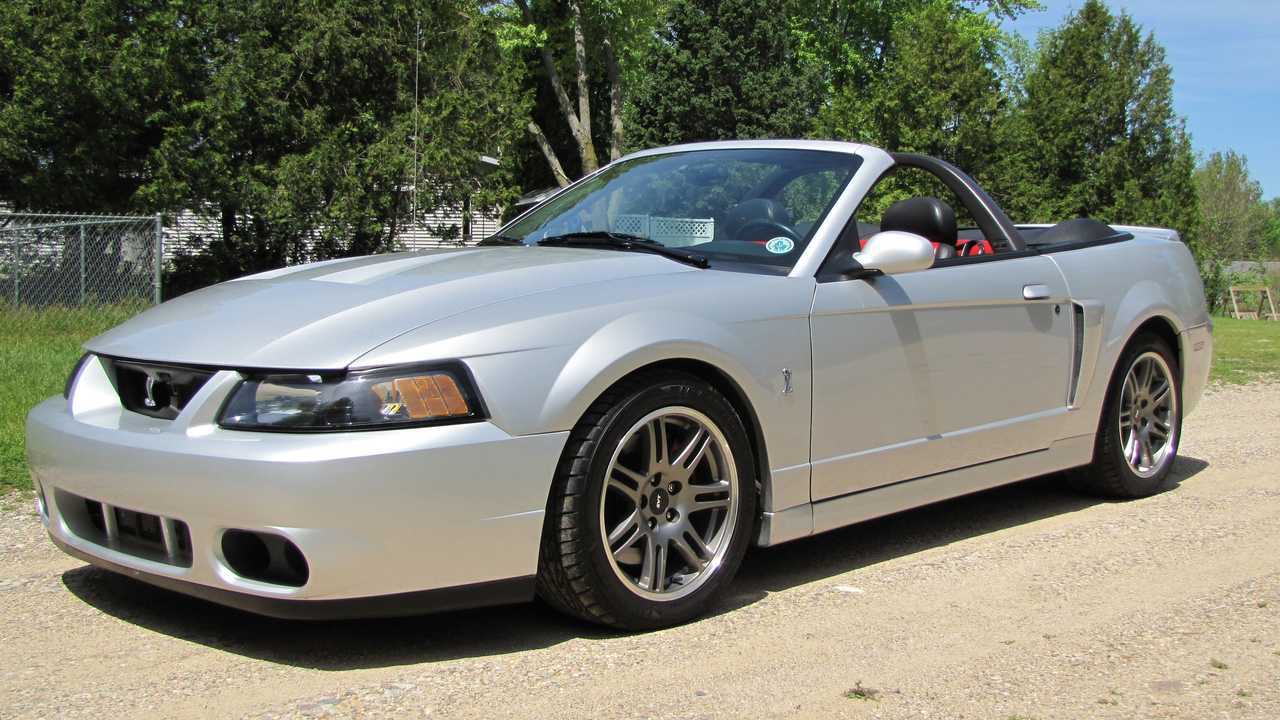 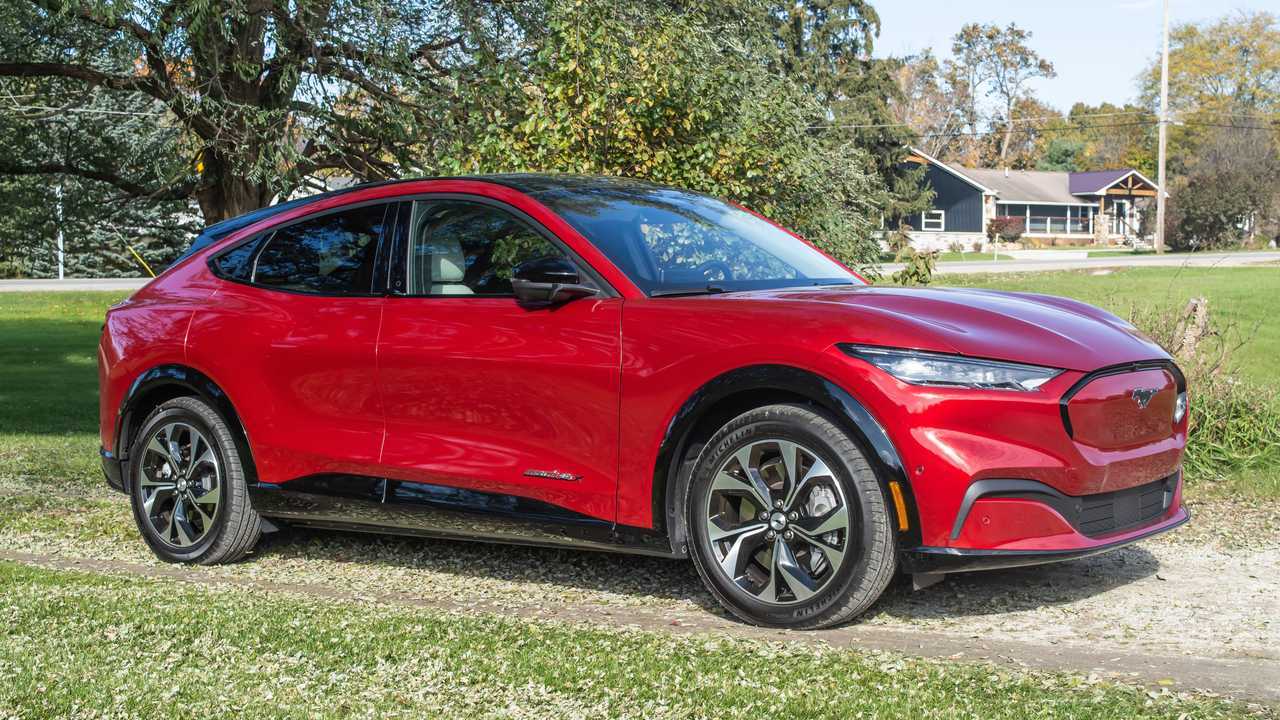 My 2003 Cobra was a burnout rockstar, but the Mach-E does better donuts. Allegedly.

Others are enjoying the time as well. Ford told me that Mach-E demand is still very high, with buyers flocking toward higher trim levels like the Premium and GT that offer more power and range. Through October 2021, Mach-E sales totaled 21,703 units, good enough for second in the electric SUV segment behind the Tesla Model Y. The real eye-opener is that it’s matching gas-powered Mustang sales month over month. It won’t beat the traditional pony car in overall sales this year, but it just might in 2022.

And if those profits help keep rip-snorting GTs and Shelby GT500s alive – just like the four-cylinder and V6 models shunned by hardcore enthusiasts have done for the past 30 years – then I have no problem modifying my definition of a Mustang to include the Mach-E. 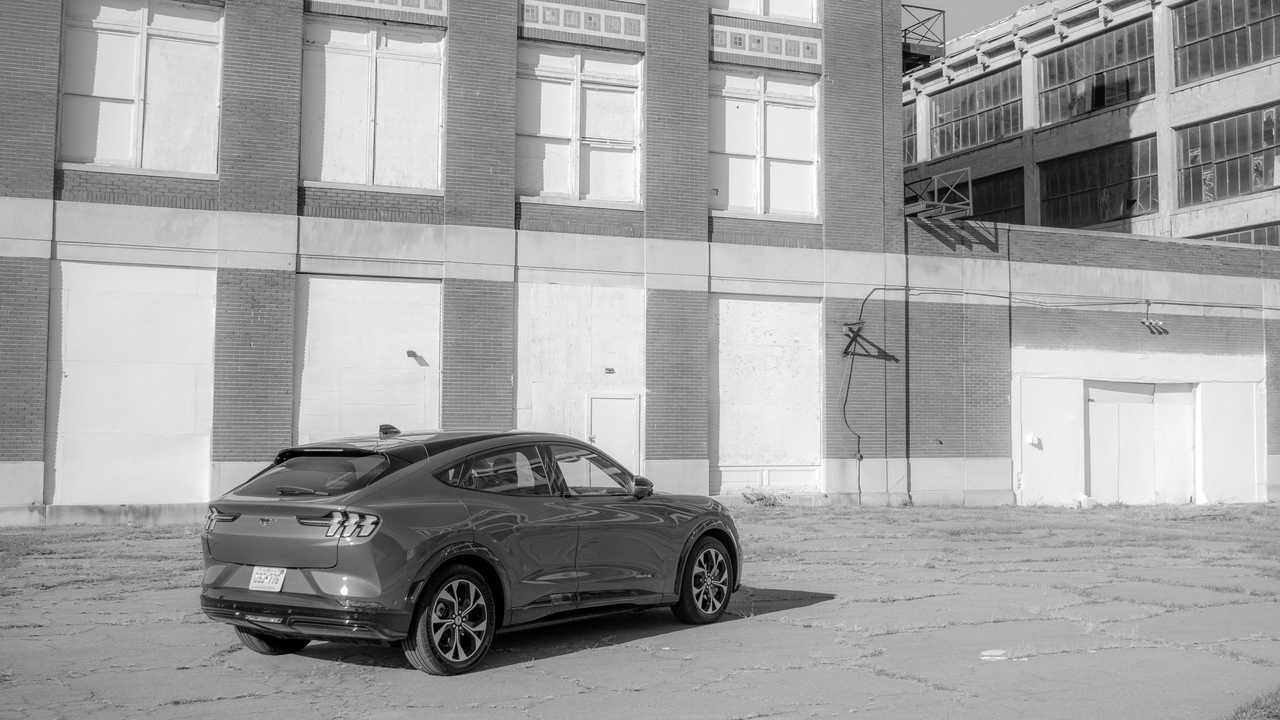 In fact, parked outside the old Ford Model T factory off Woodward in Highland Park, I realized I’d already made that adjustment. Ushering the car around for photos at the historic landmark, I wasn’t calling it Mach-E. I was calling it Mustang, without even a second thought.

Kia has teased the all new 5th generation Sportage ahead of its US debut slated for 27th October 2021. The {...}

The top-of-the-line versions of the Ford Mustang Mach-E and Tesla Model Y met up for a little bit of drag racing {...}

And we are here with the exclusive specs and features of newly unveiled Chery Tiggo 8 Pro. The company revealed {...}