Some say that the Musharraf era without an automobile policy offered more car buying options for the masses. With imports as well as locally assembled options, there was plenty to choose from in every possible segment including brand new as well as the flurry of used JDM imports which saw their true rise during those times.

Cars such as the Chery QQ, Chevrolet Joy, Adam Revo, Fiat Uno and Hyundai Santro were there among the hatchbacks in addition to the known Suzukis we were exposed to. The sedan segment had a wide variety of options such as the Kia Classic, Proton Saga, Chevrolet Aveo, Geely CK, Mitsubishi Lancer, Proton Gen-2 aeroback & Nissan Sunny in addition to the Corolla, Civic, City & Baleno/ Liana. Then there were options including Kia Spectra, Chevrolet Optra, Proton Impian, Mitsubishi Galant, Hyundai Sonata & Nissan Cefiro in addition to the likes of Toyota Camry & Honda Accord for those with preference of a larger saloon. And adding the likes of used JDM imports, the options were simply unlimited.

But it wasn’t just about the hatchbacks & sedans since there were players which were competing in segments not known for the volume buyers. Among those was SsangYong, the South Korean automaker which under the umbrella of World Automobiles in Pakistan, was offering an imported range of Rexton crossover SUV, the Chairman luxury saloon as well as the Stavic luxury MPV. While sales of SsangYong vehicles were limited, it was the Stavic which somehow managed to become the better selling ones (among what SsangYong had to offer) in the short tenure of South Korean automaker’s lifespan in Pakistan between 2005 and 2008.

The Stavic back then offered to us what the Kia Grand Carnival gave us in 2018, a luxury vehicle with a powerful engine under its hood, capable to carry up to 11 people with ease. But its biggest problem was probably the way it looked, as the car (which was also sold as Rodius in most parts of the world) was crowned as the “ugliest car ever designed” by various automotive pundits around the globe. However it wasn’t that bad in my personal opinion apart from the front grille which could have been straightened from the lower end. Although they did incorporated this tweak in the facelift versions, which made it look a lot better at least from the front, still these facelifts never reached here. 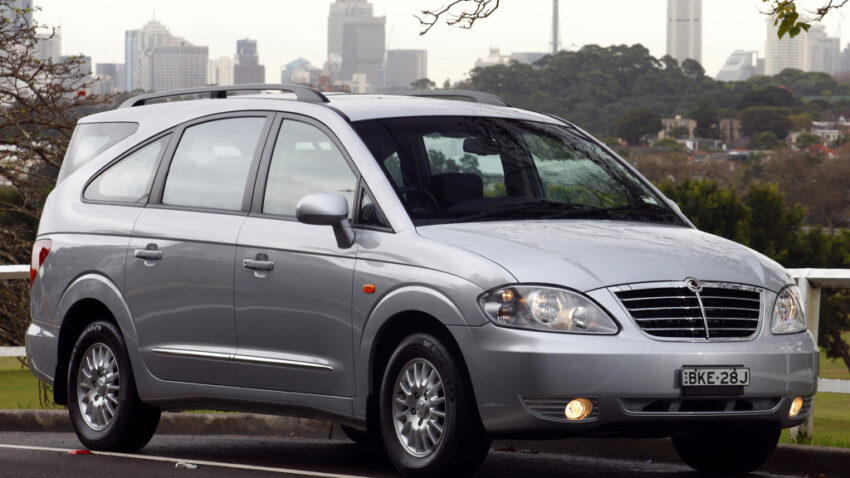 It is said that when SsangYong started to build its brand awareness worldwide, the company didn’t consider that it needed a good car designer, and the Stavic was the living proof. Although the vehicle was designed by Ken Greenley, a respectable professor & former head of the automotive design course, who ran the transportation design school at the London’s Royal College of Art, still he wasn’t able to pull off a respectable design and drew much criticism as far as the looks were concerned. The design goal was to capture the essence of a luxury yacht but it somehow backfired.

The long curved lines, big headlights, and rounded hood were not so pleasant-looking. On the sides, an arched line combined the A-pillars, the roof-line, and the D-pillars. But he realized that the car needs a different ending and installed an additional area behind, like a backpack. The tailgate was huge and crossed by various lines and shapes to make it look smaller.

However it was impressive from inside with a beige/brown color coded interior (base variants had grey/black) featuring a wide dash-board having the instrument cluster installed in the middle. Its wide speedometer could be read even by the passengers from the third row seats. SsangYong offered a choice of a bench for three or a pair of captain seats in the middle depending on the configuration. It was a comfortable vehicle with plenty of legroom and headroom for 7 to up to 11 adults. In 7-seat variants, the seats could also slide fore and aft on rails, and turn 180 degrees to allow passengers to face each other. Each seat also had an embedded back-table much like you seen in an airplane.

Stavic like most SsangYong vehicles, carried licensed Mercedes-Benz engines under its hood. There was a 3.2L 6-cylinder petrol engine (217hp & 309Nm) and a 2.7L common rail diesel engine (162hp & 342Nm). It was available in 2WD (rear wheel drive) and AWD variants with power sent to the wheels via either 6-speed manual or 5-speed automatic gearbox. Its AWD relied on the rear-wheel-drive system, and would automatically transfer torque to the front axle when the road conditions required it.

In terms of dimensions the Stavic was 5,126mm long, 1,915mm wide and 1,821mm tall with a generous 3,000mm wheelbase. For the sake of comparison, it was longer and taller than the 3rd gen Kia Grand Carnival however its width & wheelbase were slightly shorter.

As for safety the Stavic offered dual front airbags, height adjustable 3-point seatbelts with pre-tensioners for driver & front passenger, 4-wheel ventilated disc brakes with ABS and EBD, engine immobilizer and acoustic reverse parking sensors. In terms of price the Stavic wasn’t too expensive considering the fact that back in those days, it came cheaper than 5-seat Hyundai Terracan, Kia Sportage, Nissan X-Trail, as well as saloons including Toyota Camry and Honda Accord. For detailed prices of cars from that era, click here. The SsangYong Stavic variants in Pakistan were priced as:

But like many of those options, the SsangYong cars alongside other imported brands such as Mitsubishi, Proton, Geely, Chevrolet, Hyundai & Kia disappeared from the scene by 2008 due to volatile economic situations, rising Dollar value and unrealistic import conditions. Today, although the SsangYong Rexton & Chairman are nowhere to be seen, you can still come across the Stavic, most of which have swapped engines under the hood and are available for sale on various classified websites with prices hardly around Rs 1.8 million or below (Karachi market).

If someone has courage to keep these kind of vehicles today and can source necessary mechanical parts, the Stavic is still a good buy considering the sort of luxury and drive comfort it offered. Moreover it can haul up to 11 passengers which would otherwise require 2 sedans to move around, and even then you will have to squeeze them in to adjust. The Stavic was a nice car, perhaps underrated. It wasn’t too costly and with all the features it had to offer, it literally punched above its weight. Sad that it didn’t survived for long.

SsangYong was in process of making a comeback in Pakistan partnered with Dewan Group but the project wasn’t able to materialize due to troubles with both the local partner as well as the company itself. Later, SsangYong which was the 4th largest South Korean automaker, had filed for bankruptcy in December 2020 and is currently under court receivership. The parent Mahindra Group has decided to sell it to a 6-year old electric vehicle startup named Edison Motors. The deal is said to be worth around $260 million.

CES 2022 may be partially virtual, but automakers are still trotting out their plans for the near future. The Chrysler {...}

After creating a lot of hype about the latest and greatest MG cars on social media, MG Pakistan has finally {...}

The current (8th) generation of Suzuki Alto is out there since December 2014 and has completed 6 years of its {...}